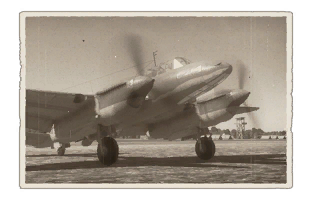 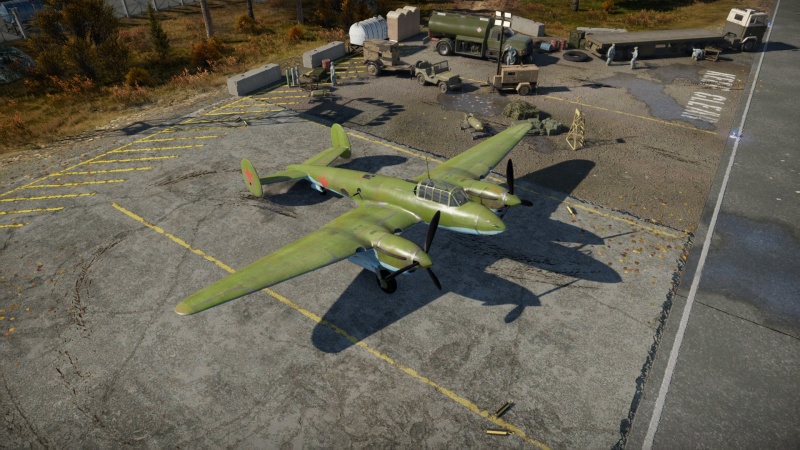 However, there are disadvantages as well. The fixed armament is inadequate at best. Two nose-mounted machine guns simply lack the punch of cannons and their low ammunition supply prevents prolonged usage. The defensive armament is not any better – the upper and lower hemisphere of the aircraft are each defended only by a single 7.62 mm machine gun, with the ventral turret having an extremely limited field of view and the side mounts being largely redundant. Your best defence is then the Pe-2's agility and speed. When attacked by enemy fighters, use your speed to run away and your agility to dodge gun passes until you have reached friendly fighters or strong allied AAA.

Fast, agile and very versatile, the Peshka can be a great bomber if used correctly and its niche lays in tank battles, as a precise dive bomber. Further research of this line will then lead you to even faster and better-armed variants. Notably 128 mm rockets, excellent for tank attacks and the occasional bomber.

The first rank of upgrades is rather uninteresting. Take either two out of three to unlock research for Tier 2. DZ-40 first to unlock more payload variants. Afterwards, the only thing to worry about is performance. Acceleration takes a hit with the new heavier payloads. Useful and in order of research are: Compressor, Engine, Wings repair, Engine Injection & Cover. The remaining upgrades can be chosen in any order.

The Pe-2-83 can be outfitted with the following ordnance:

Most versatile and useful payload variant is the 2 x 250 kg + 4 x 100 kg option. Those dual outside mounted 250 kg bombs do not drop in pairs as usual (RB/SB effect). The same applies to 2 x 500 kg payload. Each one drops single upon pressing the release button. Beware though: The unlockable payload options take a big toll on climb rate, acceleration and speed. For quick and speedy mission, the stock six times 100 kg bombs all mounted inside remains a very good choice.

The ten rockets payload is worth a look too. If compared to the highest quantity bomb loads with six single drops each. This option can engage four target more in Arcade, but one less than in RB/SB as the rockets are fired in pairs. The RS-132 is derived from the Katyusha artillery and therefore quite potent. However 100 kg bombs are stronger in overall strength and depending on the terrain easier to deliver. Rockets however only require aim with the crosshair, allowing for unobstructed view and a direct approach. Especially the former point is on often overlooked advantage. A third difference is the delivery time, rockets are just faster at the target. A big advantage versus moving targets. And they can double as anti-air armament, a department where the Pe-2s are severely lacking.