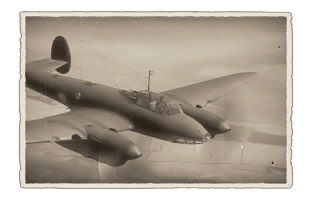 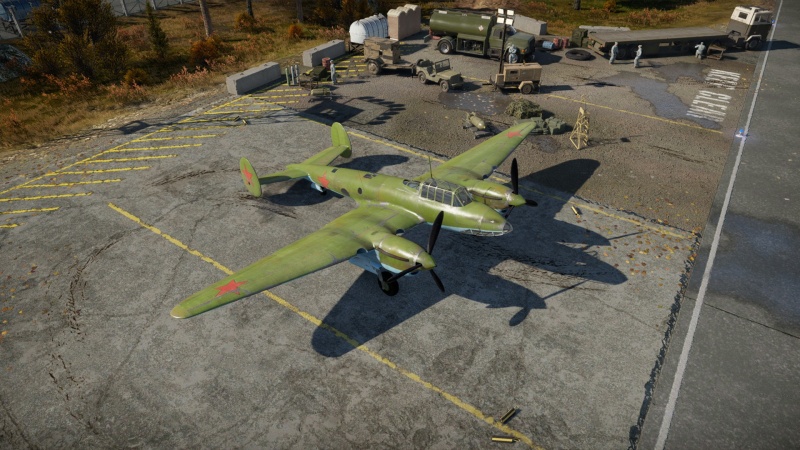 The Pe-2-1 Peshka  is a rank II Soviet dive bomber with a battle rating of 3.3 (AB/RB/SB). It has been in the game since the start of the Open Beta Test prior to Update 1.27.

The Pe-2 fulfils much the same attack craft role as the IL-2. While the guns are 7.62 mm machine guns and therefore worse than the IL-2's, it can carry much heavier bombs, allowing it to destroy targets in one hit that an IL-2 might take two or three bombs to destroy. Additionally, its nose-mounted weaponry and the fact that it spawns at bomber altitude on most maps make it a surprisingly effective hit & run bomber. However, as with other attack craft, you should have a friendly cover you whenever possible. While it has defensive guns and is faster than the Sturmovik, it is still very vulnerable when caught alone. Additionally, it is very vulnerable to diving attacks due to its dorsal-mounted fuel tank.

There are disadvantages as well. The fixed armament is inadequate at best: two nose-mounted machine guns simply lack the punch of cannons and their low ammunition supply prevents prolonged usage. The defensive armament is not any better – the upper and lower hemisphere of the aircraft are each defended only by a single 7.62 mm machine gun, with the ventral turret having an extremely limited field of view and the side mounts being largely redundant. Your best defence is then the Pe-2's agility and speed. When attacked by enemy fighters, use your speed to run away and your agility to dodge gun passes until you have reached friendly fighters or strong allied AAA.

Fast, agile and very versatile, the Peshka can be a great bomber if used correctly and its niche lays in tank battles, as a precise dive bomber. Further research of this line will then lead you to even faster and better-armed variants, notably equipped with 128 mm rockets, excellent for attacking tanks and the occasionally bomber.

The Pe-2 is a relatively fast aircraft for a plane of its BR. It has a decent climb and roll rate, but performance is significantly worse at high altitude. The turn rate isn't the best, even for a bomber of its size, and it bleeds quite a bit of speed when turning. It has decent responsiveness, even with the 1,000 kg load. It has poor low-speed performance and compresses easily (around 500 km/h). However, the Pe-2 has a fairly effective set of airbrakes mounted under the wing. It is recommended to be at around 300 km/h; even though this seems relatively high, the airbrakes and landing flaps slow the Pe-2 down quickly.

The Pe-2-1 can be outfitted with the following ordnance:

The Pe-2-1 Peshka's firepower is rather meagre, only really meant to scare off the enemies with the right angle. The 7.62 mm calibre weapons won't be destroying enemy aircraft with a quick burst. The defensive turrets are also armed with the same 7.62 mm weapons which are also poor in both firepower and protection. The turret firing arcs are small (Dorsal: 80° horizontal, +5 - +60° vertical; Ventral: 80° horizontal, -10 - -20° vertical) and open hatches mean that there are blind spots and the gunners could be quickly dispatched by a strafing aircraft. As such, it's not wise to spawn in the Pe-2 if you don't have friendly fighters up.

The Pe-2 is capable in Air RB as well as Ground RB due to its varied payload options. For air battles, any load will be effective (albeit the unlockable ones take a big toll on climb rate, acceleration and speed). The 6 x 100 kg option will still be a good choice for a quick and speedy mission. In ground battles, the 2 x 250 kg + 4 x 100 kg option and the 2 x 500 kg option are the best; it is recommended to use the 500 kg option if you are not as comfortable with bombs. These bombs do not drop in pairs.

Originally, the Petlyakov Pe-2 was not supposed to be a bomber at all. Its direct predecessor, designated VI-100, was designed by a prison design bureau team led by Vladimir Petlyakov as a high-altitude escort fighter. The VI-100 was very modern for its time, featuring a pressurized two-seat cockpit, electrically actuated systems and all-metal construction, and was powered by two supercharged Klimov M-105 V-12 inline engines producing 1,100 horsepower each. The prototype was completed in 1939 and during its first test flight on 7th May 1939, it reached a top speed of 630 km/h (390 mph) – an astounding performance for its time. The results of flight tests were so promising that the VI-100 was ordered into production.

However, Germany launched the "Blitzkrieg" campaign in September 1939. Aside from their revolutionary usage of tanks, the campaign in Poland featured notable usage of Ju 87 dive bombers and showed their potential. Consequently, the Soviet authorities ordered the VI-100 to be redesigned as a dive bomber. Pressurisation equipment and engine superchargers were removed, dive brakes were installed under the wings and the bombardier position was added to the nose of the aircraft(raising the number of crew members to three). A ventral bomb bay was added along with the two smaller bomb positions located at the rear of engine nacelles. Two rear-facing turrets, each armed by a single ShKAS machine gun, were installed to dorsal and ventral positions. The resulting aircraft, able to carry up to 1,600 kg (3,520 lbs) of bombs, was designated PB-100. The first prototype flew on 15th December 1940 and its performance (top speed of 540 km/h (335 mph)) was so good that Vladimir Petlyakov was released and the aircraft was named after him, thus receiving the designation Petlyakov Pe-2. The bomber was then rushed into serial production and deliveries to combat units began in the spring of 1941. The deliveries were, however, slow and by the time of the German invasion in June 1941, only about 458 Pe-2's were delivered.