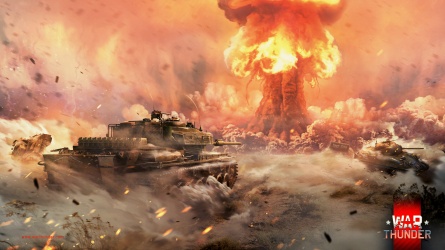 Nuclear weapons were introduced into War Thunder in Update "New Power" as an available unlock in ground battles once the right conditions are met.

Nuclear weapons in War Thunder allowed skilled players who accumulate enough airstrike points in arcade or spawn points in realistic ground battles to pilot a nuclear weapon-armed aircraft into the battlefield and drop a nuclear bomb. Successful deployment of the bomb will end the game instantly in favour of the team that first dropped their nuclear armament.

Introduction into the game

The concept of a player-launched nuclear weapon was teased as far back as the War Thunder 2018 April Fool's event Silent Thunder, where one of the objective is for player-controlled submarines to capture specific points on the map in order to enable them to fire their onboard cruise or ballistic missiles, some of which are implied as being armed with a nuclear warhead. Fulfilling this objective ends the match in favor of the capturing team's side.

Nuclear weapons for applications in ground battles were teased during the build-up of Update "New Power", with the teaser video ending with a large, bright explosion in an overcast setting. This culminated into a unique event when the update was released on 17 November 2020. A countdown timer with sirens popped up for the player, counting down until a bright flash and an explosion engulfs the screen, with the game simply telling the player "Get ready for War Thunder: New Power" that prompts the player to restart the game. Upon rebooting the game, players will login to their new hangar location introduced in Update "New Power", which will then show a nuclear explosion happening in a distance away, symbolizing the destruction of the old hangar that was used prior to Update "New Power".

Upon its introduction, nuclear weapons were originally available for ground arcade battles from battle-rating 7.3 upwards, spawning in a similar manner as the available aircraft. The nuclear weapons are unavailable in battles with helicopters randomly chosen as the air support. The unlock criteria to fly a nuclear weapon-armed aircraft was 20 airstrike points (obtained by the manual destruction of 20 enemy tanks and aircraft or through other means, such as scouting, without using a "bomber"). The eligible battle ratings to spawn a nuclear-armed vehicle expanded to battle-rating 6.0 upwards in the November 19th update. This was further modified in Update "Hot Tracks" by reducing the number of required airstrike points from 20 to 15. The nuclear weapon unlock was soon expanded to ground realistic battles in Update "Ixwa Strike" on 10 March 2021, with the unlock criteria being 3,000 spawn points. This was later modified to 2,500 spawn points in the March 19th update.

The following aircraft are available as nuclear delivery vehicles in ground realistic battles:

Note that compared to the normal version of these aircraft, their payload cannot be edited away from the nuclear weapon (though their armament ammunition belt can still be edited) and lack any kind of roundels as it's used for multiple different nations.

Although all functionally the same in ending the game with a successful drop, nuclear bombs able to be dropped by aircraft are listed below:

"New Power" update teaser - War Thunder Official Channel
Nuclear explosions were teased at the end of the "New Power" teaser trailer.
New effects for the nuclear blast - War Thunder Official Channel
MY FIRST NUKE - Nuke in Realistic Battles - OddBawZ
New Power Update Nuke?? - Frostyboy2016
A unique event shows during the update transition to "New Power" where this announcement will show.
New Update Nuke - PART TWO! - Frostyboy2016
After the previous video of the announcement, logging back into the game will show this.