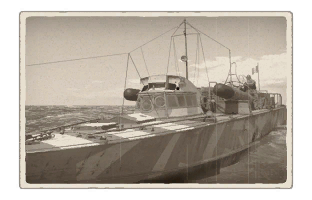 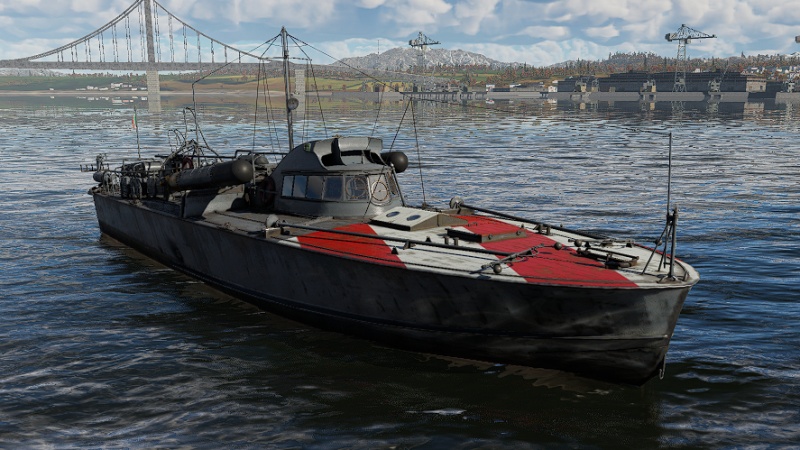 The Velocissimo Classe 500, MAS 555 is a rank I Italian motor torpedo boat with a battle rating of 1.0 (AB/RB/SB). It was introduced in Update "Starfighters".

The MAS 555's hull is protected only by 40 mm of wood with the superstructure featuring 15 mm of wood. It does not have any kind of external or internal armour this means that the ship is more vulnerable to ammunition. The survivability of the MAS 555 in general is poor because the ship only has 13 crew members, which makes it an easy target to destroy in combat.

Comparable options to the MAS 555 are the LS 3, the G-5, or the PT-6, they however have more survivability and can resist more shots.

The MAS 555 is a very fast ship up to 80 km/h in RB, 112 km/h AB. It is very manoeuvrable, this makes it very fast and agile. Providing the ability to reach the enemy quickly to initiate a first strike by launching its torpedoes and allowing sneak attacks with its use of depth charges to destroy enemy boats easily with a few drops. Thanks to its agility, it can dodge shots and make surprise/lateral attacks. 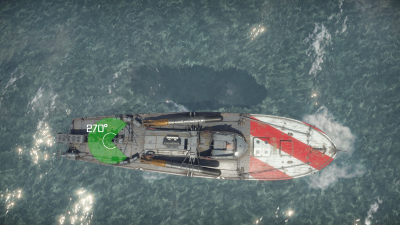 The primary armament, in fact the only armament, is a Breda 20 mm cannon. It has a rate of fire of 240 shots/min and a 12-shot magazine before reloading for a minimum of 1.8 seconds. The cannon is unable to shot in front of the ship, it is necessary to locate broadside or turn your ship 180 degrees.

Two 450 mm steam turbined W.200/450X5,75 torpedoes on the left and on the right of the ship are a useful tool against larger sub chasers and gunboats when being able to sneak up. They have a maximum speed 81 km/h, a range of 3 km, and an explosive filler of 200 kg, enough to destroy any ship at the battle rating.

The MAS is one of the reserve boats able to carry six B TG depth charges with an explosive filler of 50 kg. These however are extremely situational and most of the time defensive in nature, as you have to drive in front of the enemy ship, or wait for the enemy to pass you, to utilize these weapons. Furthermore, 50 kg of explosives is very weak for a depth charge, as most others have around 100-140 kg of TNT, limiting effective use even further.

But despite the drawbacks, making a kill with these is one of, if not the most, satisfying ways to destroy an enemy player and equally humiliating for those who are on the receiving end.

The MAS 555 is a rather strange boat, despite being the reserve boat equipped with the largest calibre, its slow rate of fire and small magazine, as well as the inability to fire directly forwards drastically limits its potential. However, it can still be a significant threat to other ships.

The best strategy whilst using the cannon is not to drive forward into battle, but to turn your rear to the enemy, and sailing in reverse. This way you can negate the limiting firing arcs at the front and still only reveal a small part of the hull, which extends your life expectancy by a few crucial seconds. The best way is to stay behind cover and move only rearwards when engaging and then back into cover. A one on one fight against almost any other PT boat will not go in your favour, therefore the element of surprise is most important.