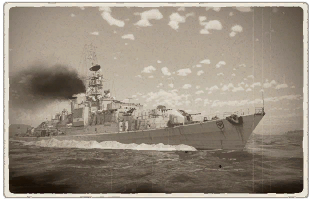 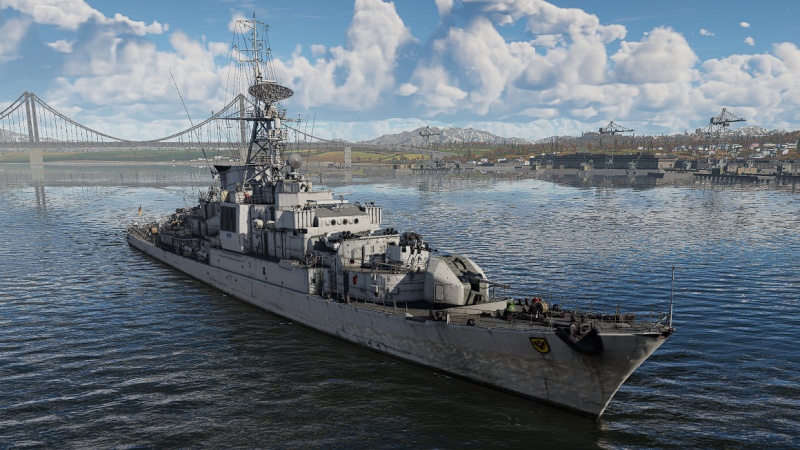 The Köln-class, Lübeck (F224) is a premium gift rank IV German frigate with a battle rating of 4.3 (AB/RB/SB). It was introduced in Update "Raining Fire" as a reward for the 2020 Wargame "Strategist" event.

Overall, the survivability of the frigate is not comparable to cruisers or destroyers but is not lacklustre either. As a modern frigate, it lacks armour which is compensated by speed and firepower. Despite not being the most well-armoured frigate in the game compared to vessels at the battle rating, it is comparable to other Cold War vessels firepower wise and mobility wise, even comparable with early cruisers and destroyers. The number of crew members, despite being relatively high, are not sufficient if head-on engagements are planned, for this reason the frigate should not be used in the frontlines as it will be often destroyed with couple hits of enemy ships, specially those with high calibre weaponry.

Mobility wise, it is one of the fastest frigates/destroyers seen in game as for now despite the ship displacement and size. As a "modern" frigate, it completely changes the doctrine of previous destroyers and frigates, meaning it compensates armour with speed. It is able to reach speeds above 40 knots (~75 km/h), making it terrifyingly fast for a ship of its size and firepower, almost on par with lighter frigates and sub-chasers (Albatros, SKR-7, etc). It is more than capable of reaching the battlefield faster than other destroyers and will outrun cruisers and battleships. When it comes to manoeuvrability, the F224 leaves nothing to desire. It is able to do tight turns (relatively tight turns but with greater speed than other frigates) as well as accelerate and decelerate quickly. Thanks to the relatively small size of the ship, it is able to stay on shallow waters compared to other frigates and destroyers which are likely to get stuck on rocks and any other obstacles.

The F224 is armed with 6 x 40 mm/70 MEL58 automatic cannons divided into 2 dual-mounted turrets and 2 single-mount turrets. They are capable of shredding anything but cruisers. The 40 mm cannons only have access to HE and HE-VT, meaning they will do little to no damage to heavily armoured targets even at point blank range. The 40 mm are your main line of defence against light and medium armoured vessels as the fast rate of fire (0.4-second reload) will cause fatal damage with even just one burst. They are also your main line of defence against any aircraft at any range from 0 to 10 km (AI gunners will not engage targets past ~10 km). They will destroy incoming enemy aircraft within seconds. The captain is able to control them manually and use the tracking radar to engage air targets manually. It is recommended to let the AI gunners engage the targets when the threat is closer than 5 km as the captain will be able to focus on more threatening enemies (other vessels or even aircraft). When letting AI gunners engage targets, be aware of which targeting setting is set (airborne and surface, airborne, surface, none) as each turret will only engage one target at a time.

1-meter depth - This is the most universal depth used for all types of engagements, being in deep or shallow waters. This depth is capable of hitting all sorts of vessels, including PT boats. The main downside is that enemy ships can see the water trail made by the torpedo which can make enemy vessels evade or fire at the torpedo.

While similar to the Köln F220, the Lübeck F224 has a different radar configuration as well as types of radars. For game purposes, nothing changes. It has the SGR105 air/surface search radar, M4/1Du, M5/1Du, M9/3Du fire control radars (FCR) and access to the KH14/9 navigation radar, useless in its current state in game. The SGR105 is located on top of the main mast. The KH14/9 navigation radar is located on top of the bridge (replacing the MV2/3Du FCR). M4/1Du is located in front of the mast. M5/1Du is located in the mast below the SGR105 radar. M9/3Du are located at the back of the ship on top of the superstructure behind the main mast. Currently only the M9/3Du is the only one modeled as fire control radar in game. Enemy pilots are often unaware of the presence of the radar as they are uncommon in-game, use surprise to your advantage. Radars can give you a huge advantage with situational awareness as no plane will be able to catch you unsuspected. Be aware of radar interference (mountains, trees, tall structures in general) as they will affect both your search and tracking radar. There are blind spots with the radars which pilots can exploit but most of them will not do so as radars are uncommon in battles. As previously stated, tracking radar can be used to manually engage targets. It is recommended to use tracking radar when engaging immediate threats the gunners are not engaging or low speed flying aircraft at long ranges (bombers). Most of the time, the use of tracking radar will not be necessary as gunners will take care of aircraft while the captain is engaging enemy vessels.

The Lübeck, as a Cold War frigate, has a very different playstyle to the WW2 frigates and destroyers, as armour is lacklustre and RPM is limited compared to some cruisers and destroyers. Thus, the Köln should be used as a support and anti air ship. The powerful 100 mm are able to decimate destroyers and even cruisers in minutes, not because of the rounds but for the rate of fire. The high speed and agility make it a decent runner when facing enemy ships and capturing points. The torpedo can be formidable if used correctly, not only for the fact they are able to destroy whatever it hits but also because they are hard to aim due to the distances the Lübeck has to navigate in order to get into a decent launch distance. The 40 mm should be used as secondary weapons for everything but sinking heavily armoured ships. They are able to decimate light vessels in seconds as well as planes. For this same reason, the Köln should be used as an anti-air flagship as it is able to detect and engage enemy planes in a range of 130 km. Absolutely no aircraft will surprise the Lübeck while the search radar is active. The Lübeck, when used in Enduring Confrontation events, is the most reliable and "Jack-of-All-Trades" ship seen in-game. Not only because it is able to dominate the skies but also because it is able to decimate enemy convoys within seconds with the firepower and torpedoes, specially if said convoys are unarmed cargo ships.

Absolutely no battleship should be engaged with the 100 mm as they are mediocre and most of the time useless due to only using HE ammunition. However, they can damage and destroy outer modules like turrets, bridge, and smoke funnels, and can start fires. When facing heavily armoured vessels, torpedoes are a must as they will be your only reliable weapon against them. The Lübeck should zig-zag when being fired at as a single salvo is more than enough to instantly destroy you. Zig-zagging reduces the chances the enemy has to hit and due to the long reload, the Lübeck is able to close distance and fire torpedoes.