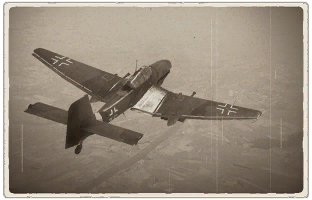 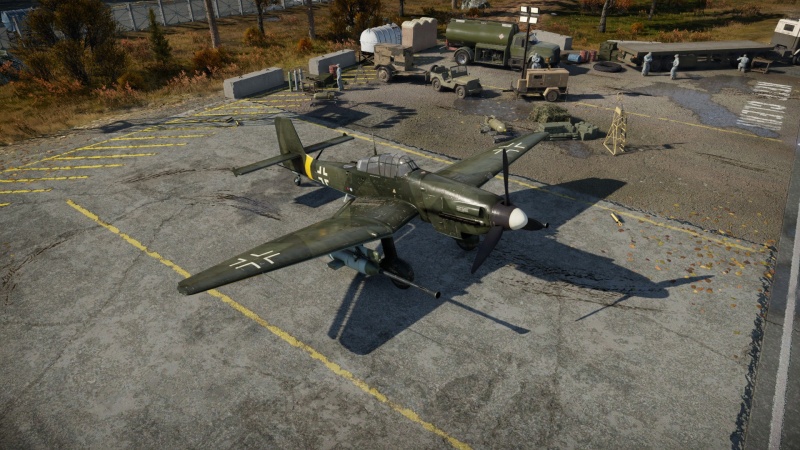 Unlocking the 37 mm belts is a must for this aircraft. The default belt is a mix of HE and AP rounds, resulting in only half of the trigger pull hitting what you want. Instead of staggering the rounds one trigger pull is HE one trigger pull is AP, it is mixed. After that, it matters not which way the Stuka pilot researches his or her modules.

The Stuka has always been famous for its ground strike capabilities. The Stuka G-1 is no exception; with twin 37 mm Bordkanone, destructive power is at your command. However, the Stuka G-1 cannot be used to hunt bombers or fighters: you can try, but the results will be disappointing.

In simulator battles, before delving into basic attacking procedure, it is recommended to trim the aircraft before anything else (once after taking off). This is to ensure the ease of aiming the turret gun, as that is your only 'offensive' weaponry. (Elevation -10%, Rudder around -1 ~ -2%?)

After taking off and trimming, fly to around 600 m above ground and lower throttle to around 80% ~ 90%. Avoid any AAA zones as much as possible, as your plane is no IL-2. Use your slow speed to your advantage to spot any possible ground targets.

When attacking, always have your Stuka fly towards the direction that is in path of the ground target. It is not recommended to 'chase' the target as that will bleed energy. Unlike the Hs. 129, the Stuka G-1 does not have forward firing light machine guns to help guide your shots, so it is best to practice a lot in custom battles on tank missions with AI tanks.

For beginners, it is best to make a habit of "one shot per run", as firing multiple times to make a hit are wasteful and risky. Remember, the plane essentially have two anti-tank guns that fires at the same time, meaning firing multiple times will reduce energy and increase risk of stall. So, if a pair of shots miss, control your urge: let go, pull up, WEP, climb, level, build energy, and try again.

The greater threat is not the ground AAs nor the enemy plane: it is the lack of patience. Have composure, memorize the mistakes, and adapt.

If an enemy plane comes towards the area of operation, ignore the enemy. Completing the Stuka's job as the objective is more important. Try your very best to squeeze in a few more grounded targets with a clear mind, as it will contribute with your Spawn Points and economy. Dealing with the enemy should be done after the objective is completed or the ammunition runs out.

It is understandable that many players want to start flying their desired fighters, but a sloppy job will contributes nothing to your team and yourself. The plane is also rewarding on good runs, so try your best. The plane may be cheap, but repeating the process is very taxing on motivation.

All planes armed with high calibre tank guns requires one virtue to be effective and this plane is no exception to it: patience.

By 1942, the need for a new ground attack aircraft was ever present. The ageing Ju 87 was proving to be obsolete, and the new Henschel Hs 129 was underpowered and ill-protected. Hans-Ulrich Rudel, a Stuka ace, proposed a pair of 37 mm cannons be added to a Ju 87 D. Thus, the "Kanonenvogel" or "cannon-bird" was born. The Ju 87 G was most famously piloted by Rudel himself, who destroyed a countless amount of Soviet equipment with it. Hans-Ulrich Rudel was the only person to be awarded the Knight's Cross of the Iron Cross with Golden Oak Leaves, Swords and Diamonds, one of Germany's highest awards. The highest-scoring ace of World War II, Erich Hartmann, also held the Knight's Cross of the Iron Cross with Oak Leaves, Swords and Diamonds – but his Oak Leaves were not gold. Rudel survived the war and his input was used to create the A-10 Thunderbolt attack aircraft.