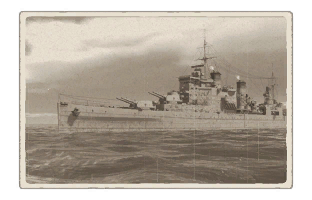 HMS London (69) was a second-generation County-class heavy cruiser. Unlike her predecessor, HMS Kent, the London has a revised superstructure and different armour protection. Commissioned in 1929, she saw extensive service before the War including the evacuation of refugees from Barcelona, during the Spanish Civil War. She was the only County-class heavy cruiser to be reconstructed, and featured a superstructure similar to the Fiji-class cruisers. During the Second World War, she participated in the hunt for Bismarck but spent most of her time serving with the Eastern fleet. She served with the China Station after the end of the war, and was scrapped in 1950.

The London, similar to her predecessors, was designed as a treaty cruiser of the Washington Naval Treaty. Thus, she was built within the 10-thousand ton standard-displacement limit and suffered, subsequently, from having little armour. She carried substantial armament of eight 8-inch (203 mm) guns in four double mounts, as well as two quadruple torpedo launchers.[1] She was also one of the only County-class ships to receive an improved anti-aircraft armament. She could make a top speed of 31 knots (57 km/h).[1]

After her commissioning, the London became the flagship of the 1st Cruiser squadron. She served with the 1st Cruiser squadron until the outbreak of war in 1939. During the Spanish Civil War, London evacuated thousands of civilians from Barcelona with her sister ship Shropshire. From March 1939, she was given a lengthy refit; though her engines were not refitted, she was given a new superstructure giving her a similar appearance to the Fiji-class cruisers.[2]

London's reconstruction was completed by March of 1941; she then participated in the hunt for the German battleship Bismarck.[1] During this time, it was found that her new superstructure caused significant weight stress to the upper hull, so she was repaired once again between late 1941 and early 1942.[2] When service with the British Atlantic fleet caused cracks to appear in the hull, she was repaired once again; this time, she would not be operational until 1943. Following the completion of repairs, she served with the Eastern fleet until the end of the war.[2]

As the only modernised County-class heavy cruiser, the London was selected to serve after the war. She sailed to the Far East in 1946 to serve with the China Station. She remained in Chinese waters until 1949, when she was relieved by the cruiser HMS Kenya.[2] It was determined that London's ageing equipment and large crew complement made an additional refit unfeasible; as a result, she was sold for scrapping in 1950.[2]

The County-class cruisers, also known as the A-Type cruisers, were the first British cruiser vessels to be developed in the interwar period of the 1920s. Their design being heavily influenced by the restrictions imposed by the Washington Naval Treaty, meant that British shipbuilders had to find compromises during development in order to comply with the treaty as well as to meet the requirements of the Royal Navy for a ship capable of trade route protection.

This resulted in the creation of a ship design with good cruising range and adequate firepower, but very light armour protection in order to stay within treaty restrictions. The orders for the first ships were placed in the mid 1920’s and construction began in 1924.

HMS London (C69) was laid down in February 1926 and commissioned into service in January 1929 as the lead ship of the second batch of County-class cruisers to be built, known as the London subclass. During the 1930’s, HMS London took part in a goodwill visit to Venice and assisted in the evacuation of civilians from Barcelona during the Spanish Civil War, before being sent to drydock for refit in 1939.

In 1941, HMS London took part in the hunt for the battleship Bismarck, after which the ship was once again dry-docked for repairs. The following year, HMS London assisted in escorting several convoys in the Atlantic, after which she was assigned to South African waters in 1943, before joining the Eastern Fleet. HMS London continued serving in the postwar years, during which the ship got involved in an incident in Chinese waters in 1949 which left it heavily damaged. Being deemed uneconomical for repairs, HMS London was sold for scrap in January 1950.