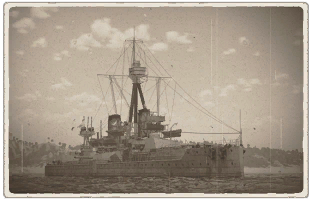 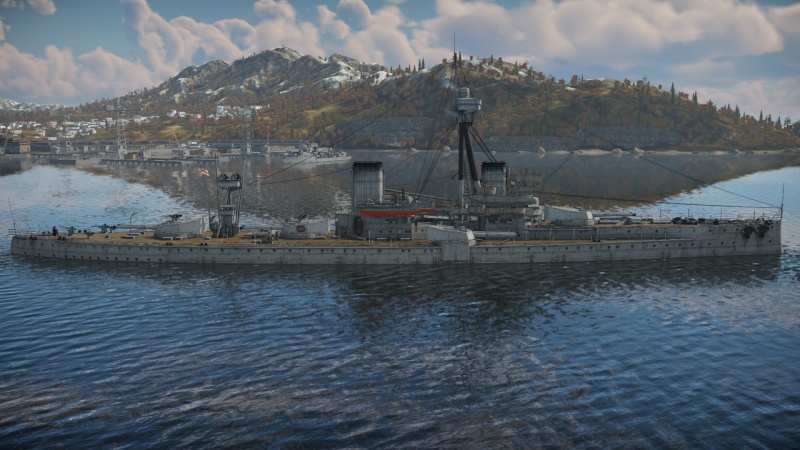 The HMS Dreadnought, 1917 is a rank V British battleship with a battle rating of 6.3 (AB/RB/SB). It was introduced in Update "New Power".

The Dreadnought is the battleship that launched the dreadnought revolution in 1906. She was the first all-big gun battleship powered by turbines to enter service with any navy, representing a quantum leap in firepower and speed over all previous capital warships and further establishing Britain's position as the leading world naval power at that time. Fittingly, the Dreadnought is also one of the first battleships to be introduced into the game.

The Dreadnought has a reasonably thick armoured belt for a first-generation dreadnought battleship. It is 279 mm thick below the waterline and 203 mm above the waterline, thinning out to 152 mm towards the bow and 102 mm towards the stern. The Dreadnought also features a "turtleback" citadel, with angled 70 mm and 76 mm plates behind the main belt designed to deflect shells that penetrate the main belt. The bow end of the citadel is protected by an angled 102 mm plate, while the stern end is protected by a 203 mm vertical upper plate and 102 mm angled lower plate. The upper deck plating is 19 mm thick and the lower deck plating is 45 mm thick amidships, 38 mm over the bow, and 51 mm over the stern and steering gear.

The main gun turrets are protected by angled 279.4 mm plating around the front and sides, 330 mm plating on the rear, and 76.2 mm plating on the turret roof and the bottom. The bow, stern, and wing turret barbettes are 279 mm thick facing outwards from the ship and 203 mm facing inwards, while the amidships turret has 203 mm all-round barbette protection.

The main gun magazines are located well below the waterline and are further protected by additional 51 mm and 25 mm plates, with 102 mm plating covering the outward facing sides of the wing turret ammunition magazines.

The bridge is protected by an armoured conning tower with 279 mm thick sides and a 76 mm roof.

The Dreadnought also has additional protection amidships from her coal bunkers, which provide the equivalent of about 40 mm of steel.

The Dreadnought has a small crew complement for a battleship, along with the British Colossus.

The Dreadnought has about average mobility for a first-generation dreadnought. As a battleship, she is displaces much more than cruisers and destroyers, and thus her acceleration and top speed are much lower. Her handling and manoeuvrability are about average for a battleship.

The Dreadnought is armed with ten BL 12-inch Mark X main guns located in five twin turrets. Two of these are wing turrets located amidships that can only fire to one side each, thus her actual maximum broadside consists of only eight main guns from four twin turrets. She can also bring six guns to bear directly ahead or astern from the wing turrets (which have 180 degrees of traverse) and the bow/stern turret. The turrets have fairly good traverse arcs towards the bow of the ship (the two rear turrets can traverse up to 150 degrees to each side) and somewhat worse towards the stern (the bow turret can only traverse up to 141 degrees to each side). The guns have a maximum rate of fire of 2 rounds/minute per gun with an aced crew.

Ammunition types consist of HE Mark IIa, APC Mark VIa, and CPC Mark VIIa (semi-armour piercing). The HE shell has the second largest explosive filler of any 12-inch/305 mm shell at ~53 kg of TNT equivalent, with only the SAP shell of the Russian/Soviet 305 mm used by the Parizhskaya Kommuna and Imperatritsa Mariya having more explosive (~55 kg TNT). It is capable of causing immense damage to destroyers, most cruisers, and other lightly armoured targets. By contrast, the APC shell is the lightest of the 12-inch AP projectiles, has a relatively small filler of only ~12 kg TNT, and has the lowest penetration of the AP shells its calibre. The CPC SAP shell is a compromise between the explosive power of the HE shell and the penetration of the APC shell. It has enough penetration to go through anything other than thick battleship belt armour, and has ~36 kg of TNT.

Dreadnought's rangefinder is quite poor, having a measurement accuracy of only 86% upgraded, reflecting its age.

The Dreadnought's secondary armament consists of 18 QF 12-pounder Mark I in single mounts. These are 76 mm guns, thus the Dreadnought's secondary battery of the smallest of any battleship in the game. Each gun has a rate of fire of 15 rounds/gun with an aced crew. Each main gun turret has two of these on its roof, with the remaining ten guns scattered around the ship's hull and superstructure. These guns can only elevate up to 20 degrees and only fire CP semi-AP shells, thus are only useful against surface targets. The CP shell has a small filler of only 520 g TNT equivalent and low penetration, thus it will struggle to do much damage against anything other than coastal craft.

The Dreadnought has two anti-aircraft QF 12-pounder 20-cwt HA Mark I guns. These have a low rate of fire of only 12 rounds/minute with an aced crew, and there is no option to use time-fused shells, making them less effective against aircraft.

The Dreadnought has four fixed 18-inch underwater torpedo tubes, two in the bow and two in the stern, with two facing port and two facing starboard. She can carry up to 30 18-inch Mark VI** torpedoes. These are fairly slow (56 km/h) and have a short range of only 5.49 km. The warhead is also quite small, at only 134 kg TNT.

As the first dreadnought battleship, and therefore the oldest one, the Dreadnought has its strengths but also some prominent weaknesses stemming from being the first of its kind. She has a fairly powerful main battery of ten guns, especially when shooting the powerful HE or SAP, but only eight of these can be used against a target at most thanks to her wing turret configuration. However, with some slight manoeuvring, she can use six guns on targets directly ahead or astern thanks to these wing turrets, while presenting the smallest target possible. The APC shell is weak for a battleship's 12-inch-gun, but this is compensated for with sheer explosive power from the HE and SAP shells along with the fires they cause.

Her secondary battery is the weakest of any battleship in the game, relying exclusively on the 76 mm guns. These are fairly ineffective against even destroyers, and only really effective against small coastal craft. The anti-aircraft armament is about what can be expected for a World War I era battleship: virtually non-existent.

The Dreadnought's survivability is generally quite good against anything other than the most powerful battleship guns. Her overall protection level is quite decent, and can be improved even further with angling. However, her small crew complement is a significant drawback, especially vulnerable towards fires. 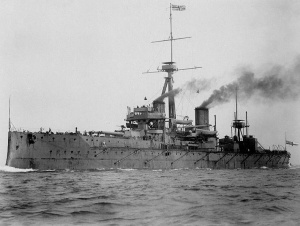 HMS Dreadnought, sole ship of her class, was a dreadnought battleship of the Royal Navy. Launched in 1906, the Dreadnought was a revolutionary battleship design featuring a large main battery of ten 12-inch (305 mm) guns in five twin turrets. Her name, "Dreadnought", would be used to describe all of the battleships built after her construction and with similar design. Dreadnought's construction led to a global arms race, as countries like Germany, Japan and the United States scrambled to build dreadnoughts of their own. HMS Dreadnought served during the First World War, but saw little service; despite her design as a battleship, her only action was the ramming and sinking of a German U-Boat. The action made Dreadnought the only battleship confirmed to have sunk a submarine. Dreadnought did not participate in the Battle of Jutland (as she was being refitted), and saw little service for the rest of the war. She was reduced to reserve in 1919, and scrapped several years later.[1][2]

In 1905, Sir John "Jackie" Fisher, First Sea Lord of the Royal Navy, began the process of designing a new class of battleship.[1] This design would become one of the most revolutionary developments in naval history. The new battleship would feature an "all-big-gun" armament; this was a stark contrast to the existing battleship designs, which had a smaller big-gun armament and numerous secondary guns. The vessel was named Dreadnought, meaning "fear-nothing".[1] The ship was also fitted with steam turbines, a novel engine type that made the ship faster than all existing battleship designs.[1]

The Dreadnought was armed with a main battery of ten 12-inch guns mounted in five twin turrets. It also carried a substantial amount of secondary guns. The ship displaced 18,000 tons, and was 160 metres long.[2] Powered by the new steam turbines, Dreadnought could make 21 knots, which made it faster than any existing battleship designs. Dreadnought was ordered in October of 1905, and launched in early 1906. It was formally commissioned on December 2nd, 1906.

Dreadnought's construction was a huge shock to the naval community, as the ship far outclassed any existing battleship design. As a result, the ship lent its name to all new battleship designs - these would be collectively known as "dreadnoughts". Any battleships built before dreadnought were known as "Pre-dreadnoughts".[1][2] Dreadnought's construction also triggered a naval arms race, as numerous nations raced to build their own dreadnoughts; these included the German Nassau-class, Japanese Kawachi-class and American South-Carolina class.

In part because of the arms race it caused, Dreadnought was made obsolete by the rapid progress of naval design.[1] Before the start of the First World War, super-dreadnoughts emerged; these ships were far more advanced than the Dreadnought, incorporating innovations such as a centerline-mounted main battery. Dreadnought, being relatively obsolete, saw little service during the First World War; it didn't participate in the Battle of Jutland, nor any other surface engagements. Dreadnought's only action occurred in March of 1915, when she rammed and sank a German U-Boat;[2] this made her the only battleship known to have sunk a submarine. Due to her obsolescence, Dreadnought was relegated to reserve in 1919; she was sold for scrapping, and scrapped in 1923.[1]

At the turn of the century, notable developments in all aspects of naval warfare could be observed, ranging from gunnery practices over torpedo design to propulsion systems. HMS Dreadnought, as it would become known, was developed to take advantage of these latest developments, in particular, by incorporating a steam turbine propulsion system and by adopting a so-called 'all-big-gun' weapons arsenal.

The latter in particular, meant a unified calibre main battery, thus moving away from the common practice of installing multiple calibres of weapons aboard a large warship, which proved increasingly inefficient. In a similar fashion, HMS Dreadnought was to become the first warship to be fitted with steam turbines, giving her a greater speed than any comparable warship at the time.

HMS Dreadnought was laid down in October 1905, launched in February 1906 and, after undergoing sea trials, commissioned into service with the Royal Navy's Home Fleet as its flagship in December - just fifteen months after it was laid down. Immediately after entering service, HMS Dreadnought virtually rendered all older battleships obsolete due to its advanced design, thus also kicking off a naval arms race, most notably between Britain and Germany.

During WWI, HMS Dreadnought saw little action, in fact missing the critical Battle of Jutland in 1916 as the ship was carrying out other duties. Although designed to defeat other battleships, HMS Dreadnought's most famous encounter with hostile forces was the sinking of the German U-Boat U-29 by ramming it in 1915!

After the war, HMS Dreadnought became surplus to requirements as more and more modern battleships took her place. After a brief postwar service, HMS Dreadnought was sold for scrap in May 1921. Although the mighty warship was ultimately broken apart, its construction represented such a milestone in naval development that history remembers it as nothing short of a naval legend.