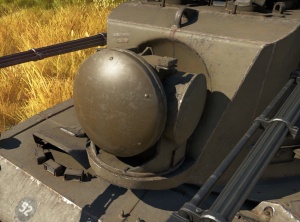 The Gepard tracking radar mounted on the front of the Gepard's turret.

The Gepard Tracking Radar is a German ground based target tracking radar. It was designed as the tracking / fire control radar for the Gepard.

This only a tracking radar, this means it can lock onto targets and provide a firing lead indicator, but cannot by itself detect targets and place them on the radar display. However all vehicles the radar is fitted on in-game are also equipped with various search radars; this allows them to use their search radar to detect targets, while this radar is tracking a target. The Gepard tracking radar can track targets in a 200 degree arc from the front of the turret, out to a maximum range of 15 km.

Compared to other tracking radars, the Gepard's has an average maximum range and a good minimum range. The minimum relative speed is about average. The azimuth tracking angles are slightly wider than some other radars at ±100° (instead of ±90°). The negative elevation tracking angle is best in class, however the positive elevation angle is very slightly (2°) worse than other radars.

Examine the history of the creation and combat usage of this radar. If the historical reference turns out to be too big, take it to a separate article, taking a link to an article about the radar and adding a block "/ History" (example: https://wiki.warthunder.com/(radar-name)/History) and add a link to it here using the main template. Be sure to reference text and sources by using <ref>, as well as adding them at the end of the article.