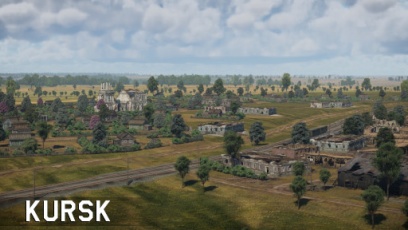 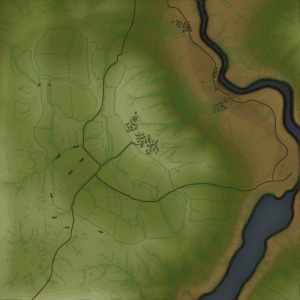 Fire Arc is a ground forces map available in all modes. Originally named Kursk, it is one of the oldest tank maps, being present in the ground forces Closed Beta Test (CBT), and being released with the ground forces Open Beta Test (OBT) in Update 1.41. The map is set in the vast open fields, of the Kursk Salient; as such the map is very open, with only gentle hills and tree lines to provide cover / concealment from enemy tanks. A river runs up the east of the map, starting in the south, and advancing out of the map area, before cutting back in, through the north east of the map. Over the years, it has received numerous small updates and changes, the most recent being a major rework to the available cover and central village in Update "Starfighters", where it also received its present name.

A large, gentle hill runs northwest to south east across the map, slightly to the east of the middle of the map. There is a small town made up mostly of wooden houses, in the centre of the hill. Although the houses look destructible they are for the most part solid objects and so can block shots. Only smaller sheds and parts of some houses can be shot through and destroyed. The destroyed church in the centre of the town is sometimes used as a capture zone. Players can partake in short range engagements in the town but most fighting will take place at medium to long range. Players often sit on each side of the hill and exchange shots at long range on its eastern face (the shape of the hill means that players on the north of the eastern face can see players on the south and vice versa). Players will also try to shoot enemy tanks trying to advance to the town, and once in the town the large spacing between the buildings mean that players in the town are still open to enemy fire, often returning shots at medium range. The hill also enables players to shoot down on enemy tanks in the eastern area of the map.

The east of the map is much lower than the hill. Reasonably thick tree lines in the southern part of the area, and along the base of the hill, provide tanks in this area with some concealment, from the enemy tanks on the hill. However these tree lines also provide the perfect hiding place for enemy tank destroyers. There is a small settlement on the banks of the river, the buildings of which can be used as cover. The capture zone in this area is outside of the town, around the wreckage of a crashed Pe-2 Peshka. The wreckage is in the middle of an open field, leaving any players trying to capture the zone extremely exposed.

The map is set in the Kursk salient; specifically the air map puts the ground forces area approximately 15km (9.3miles) west of Prokhorovka, or about 80km (50 miles) southeast of the city of Kursk. The general area seems accurate and the layout of the air forces map is correct, however the exact layout of the tank area seems to not be accurate, just inspired by the real location.

The Battle of Kursk lasted from 5th July 1943 until the 23rd August 1943, It was the turning point of the War on the Eastern Front. Following the German capture of Kharkov in February 1943, Soviet forces had been able to create a bulge 240km (150 miles) wide and 160km (100 miles) deep into the German lines, around the Kursk Salient. The Germans planned a surprise attack on the salient from both north and south, hoping to surround and destroy the Soviet forces within the bulge; however Soviet spy networks and reconnaissance provided them with advanced warning of the impending attack, allowing them to prepare accordingly. The German's hoped that a successful attack would lead to the breakdown of relations between the Soviets, and other Allied forces, who they viewed as being reluctant to open up a second front in the west.

On the 5th July 1943 German forces began their attack, however soon stalled, advancing only 16km (10 miles) in the north of the salient and 48km (30 miles) into the south. The Soviets launched counter offences in both the north and south on the 12th July. The southern counter attack led to a massive armoured clash in the area around Prokhorovka (where this map is set). The Battle of Prokhorovka is widely acknowledged as one of, the largest tank battles in history, with up to 429 German and 870 Soviet tanks (1299 total) taking part. It is believed that in total around 6,000 tanks, 4,000 aircraft and 2,000,000 troops were involved in fighting at the battle of Kursk, making it one of the biggest battles of the war.

Domination
There are three Capture Points. Point A will be in the southwest fields, B is in the town on the main hill, C is at the crashed Pe-2, near the river and town in the northeast. 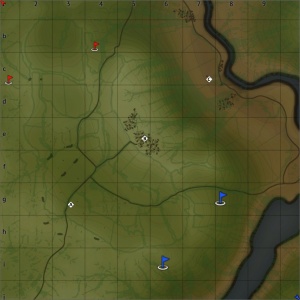 Conquest
There is are three configurations of the conquest mode, each with one Capture Point. The point will be near (although not in exactly the same place) as one of the Domination points. 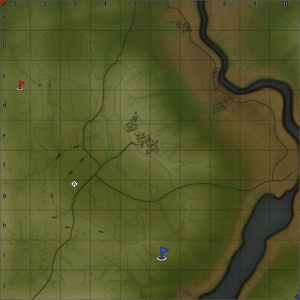 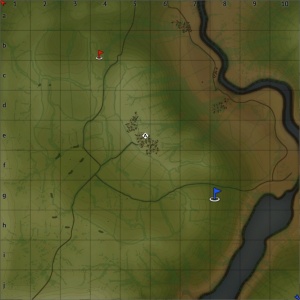 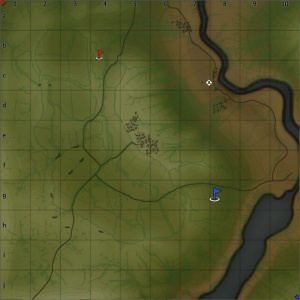 Battle
There are two capture points, each owned by one of the teams. The points are in the eastern town (near the river) and the western fields. 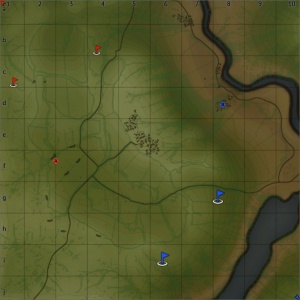