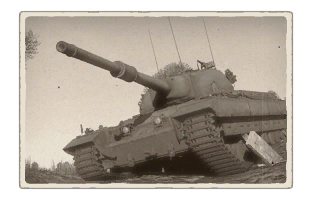 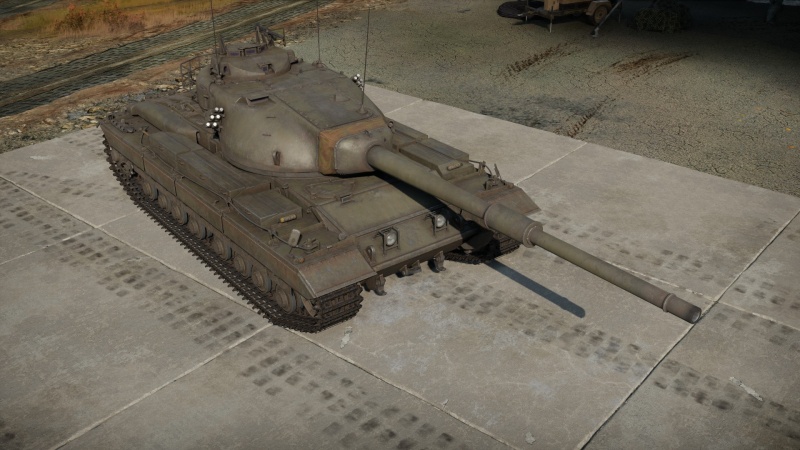 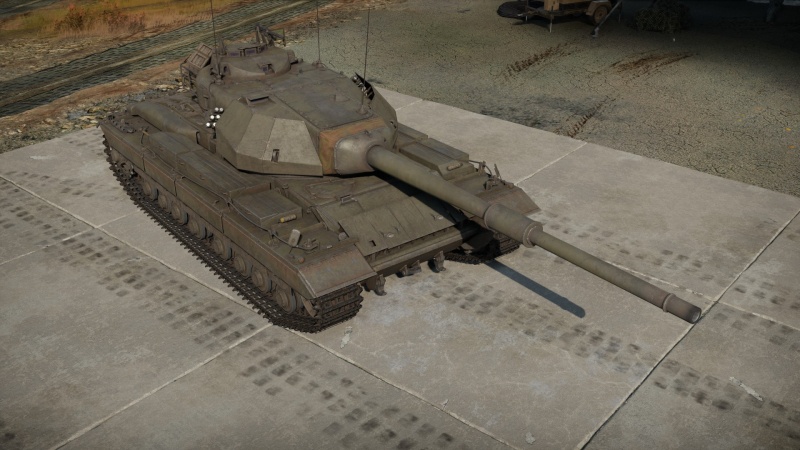 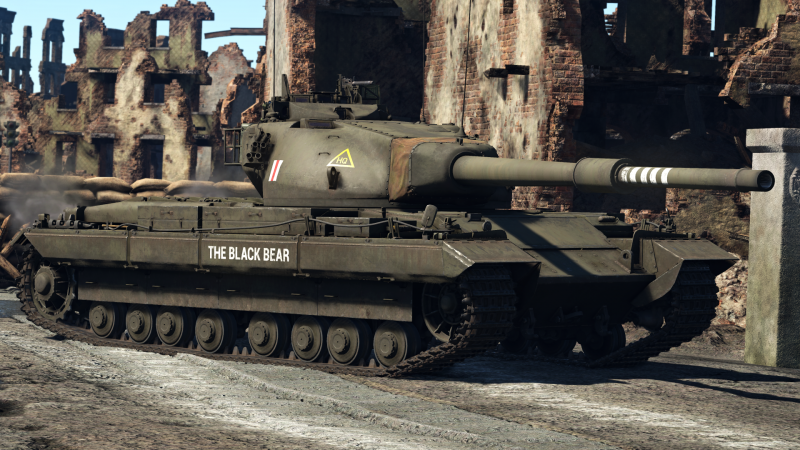 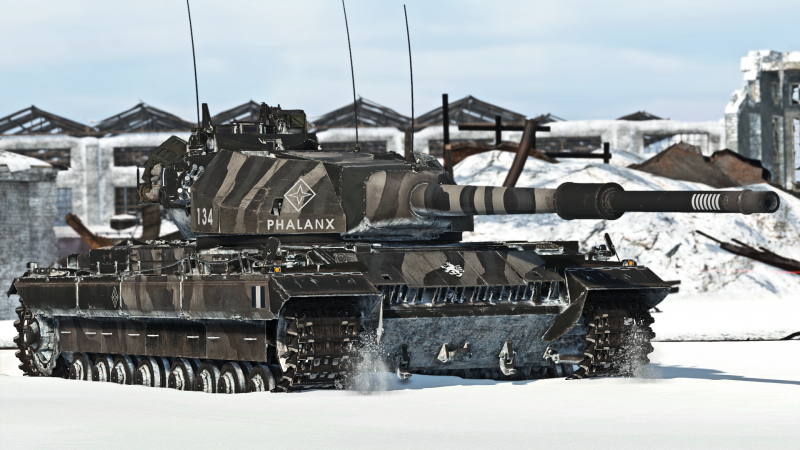 The Tank Heavy Gun Conqueror Mk 2 is a rank V British heavy tank with a battle rating of 7.7 (AB/RB/SB). It was introduced in Update 1.55 "Royal Armour" along with the initial British ground tree. Designed to combat the Soviet IS-3, the Conqueror gives the British line a much-needed vehicle with an emphasis on armour and firepower, with a 120 mm L1A2 cannon capable of defeating all of the Rank V competition it will face.

The Conqueror was the tank the Caernarvon hull was designed for. The Caernarvon itself only being a stop-gap measure, with most models being upgraded to Conquerors once the type was approved for production. The Conqueror augments this hull with a significantly upgraded turret design housing the 120 mm L1A2 cannon.

A basic weak spot of the Conqueror; the gun mantlet. The area is hit because of Conqueror's poor depression. It can be targeted by large-calibre HE, APDS and Sabot shells. -The shown camouflage is known as 'Phalanx', part of the 'Night vision' trophy.

The Conqueror utilises the same hull as the Caernarvon does, with respectable frontal armour capable of shrugging off rounds from many adversaries. Unfortunately, this hull suffers from similarly weak side and rear armour - and as such angling, the vehicle can prove extremely dangerous if it exposes the side too much. The Conqueror replaces the Caernarvon's Centurion-based turret with a fresh design, providing much better crew spacing and protection. The turret is not without its weaknesses, however; the commander's cupola protrudes quite significantly and APHE or HESH shells may disable internal turret components or crew members. There is also a weak section directly behind the mantlet at the top of the turret, penetration of which will disable crew or the breech/horizontal turret drive. Trap shots are possible, it is likely to get shot with a high calibre HE, capable of damaging the tank by hitting the base of the turret and exploding into the driver and/or ammo rack just below it. Unlike with similar tank M103 though, for most heavy tanks HE can only penetrate the driver hatch, taking them out, and damage the gun breech on a good hit. SPG calibre HE (like 152 mm of Object 268) will definitely destroy the roof armour and ammo rack, resulting in a knock-out, unless only a few shells are being carried (which is highly impractical). Non-HE shells are less likely to ricochet and do significant internal damage like this, but it is still possible to push them into the tank.

The 120 mm L1A2 is a powerful gun, derived from the M58 mounted on the M103 heavy tank. Unlike the M103's selection of HEAT or AP, the Conqueror instead utilises HESH and APDS ammunition, and again unlike the M103, mounts a two-plane stabiliser. The L1A2 exhibits excellent accuracy and long-range performance, although due to the sub-par post-penetration effects of APDS in some cases multiple rounds are required to secure a knock-out, particularly at range where critical components or ammunition is less reliably hit. 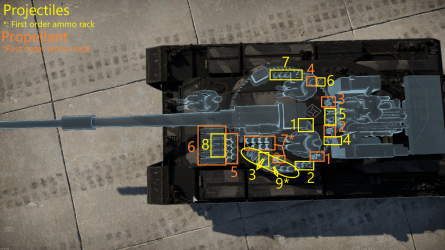 Ammo racks of the Conqueror

The Conqueror sports two machine guns, one of which is pintle-mounted and may prove itself a deterrent to some close air support. The machine guns may on occasion prove useful for destroying incoming ATGMs, given a bit of luck.

The Conqueror can be effectively played as a sniper, or a steady breakthrough tank, providing the vehicle's slow reload and weak lower front plate are considered. This heavy tank should not be played in a brawling role. It will easily be flanked and disposed by the side armour plates. Commanders are advised to remain on some of these roles:

When used in a sniper role, the Conqueror should utilise extreme ranges with some form of cover available, in case the situation goes awry. Ensure awareness is maintained for light flanking vehicles or enemy sniping vehicles on off-angles that may be able to disable the Conqueror through side armour. Play conservatively, avoiding wasting shots, having to wait for the long reload time, and avoid exposing the hull where possible.

Remember the rangefinder and if possible find locations that cover the hull of the Conqueror.

The Conqueror may be utilised in a breakthrough role, although it should be played conservatively with allies and with a level of map awareness at all times. The stabilised gun allows the conqueror to comfortably fire on the move - a rare piece of equipment at the rank - this gives it a distinct advantage over most targets it will face at close range, with the ability to reliably hit targets without waiting for the suspension sway to subside. However, the vehicle's slow reload means that calculated shots are a requirement, and wasting any round may have dire results.

As usual, keep in mind that the vehicle's sides and lower front plate are particularly vulnerable and exposing either to enemy fire will often result in the Conqueror's destruction. If the advance seems to be failing, or the Conqueror is on risk to be flanked. Remember the good reverse speed, this along smoke cover will grant second chances.

In 1949, a new requirement for the project called for the use of a 120 mm gun, possibly in response to the reveal of the Soviet IS-3 heavy tank in the Berlin Victory Parade in 1945. This new requirement would delay the initial deadlines for the tank as no gun of that calibre had been developed yet. As a interim development before such a gun could be made, the FV 201 hull was mounted with a turret from the Centurion tank and this created the FV 221 Caernarvon, with Mark I for a 17-pounder armament and a Mark II for a 20-pounder armament. However, the success of the lighter Centurion tank made the Caernarvon unsuitable in a "Main Battle Tank" role. Further development on the Caernarvon, with emphasis on the armour and armament, would develop the FV 214 Conqueror tanks, some were straight up conversions of Caernarvon Mark IIs. About 185 Conquerors were produced in Mk.1 and Mk.2 variants from 1955 to 1959.

The gun was the very large 120 mm cannon, the largest calibre tank gun available when it was introduced. The gun was American-developed, the same 120 mm cannon that would arm the M103 heavy tank. The gun uses a two-piece ammunition and the tank allowed for a ammo stowage of 35 rounds. Another notable feature of the Conqueror aside from its large cannon and thick armour was the unique and rotatable commander's cupola. In the cupola was the Conqueror's fire control system and had many features that made it ahead of its time. Being able to be rotated independent from the turret, plus with a coincidence rangefinder, the commander could align the cupola to a target, measure its range, and direct the gunner to the designated target. While the gunner located and engage the target, the commander could go and find a different target to designate and range.