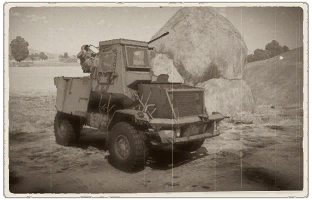 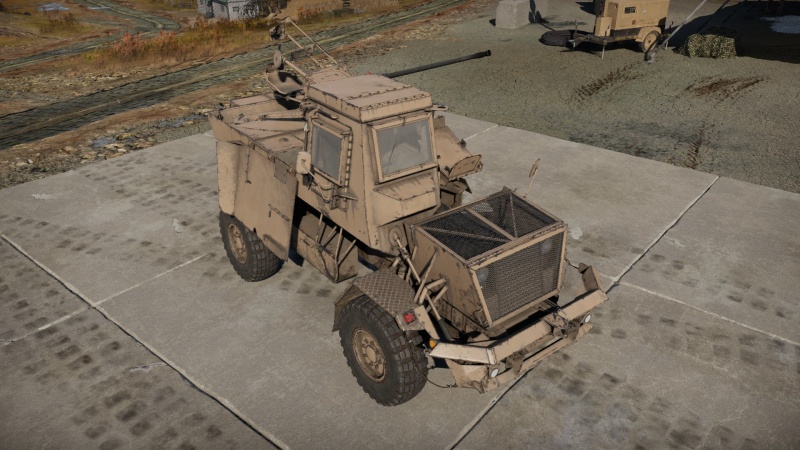 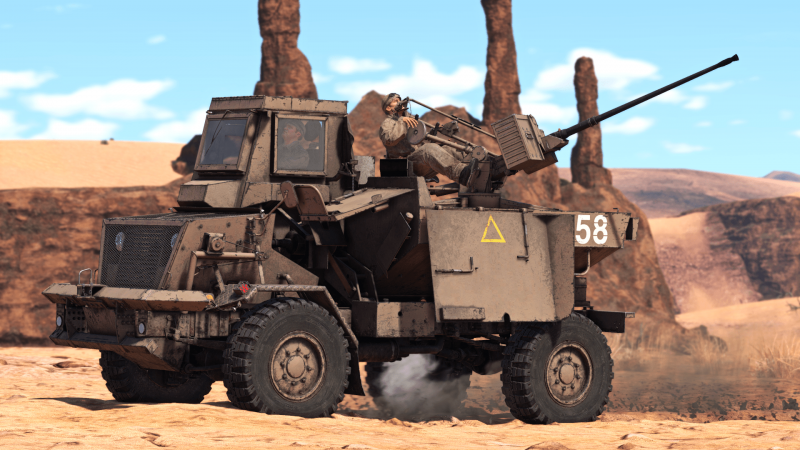 The Ystervark is a rank III British SPAA with a battle rating of 4.3 (AB/RB/SB). It was introduced in Update "Ground Breaking".

The Ystervark, much like its namesake (a 'Cape Porcupine' for those curious), can be a very prickly foe for an enemy team to deal with. With its tiny and nimble frame, accurate and fast firing 20 mm cannon. It can pull any unwary aircraft crashing down from the sky within its reach, provided the player is attentive and clever with their positioning.

As is the case with most truck or flatbed-based SPAA vehicles, the entire crew is not protected by any meaningful armour or cover. The commander and gunner sit freely outside unprotected and the driver at most is protected by thin armour and bulletproof glass. The bulletproof glass may in extreme cases or angles stop rifle calibre fire and even the odd 20 mm round keeping the driver safe but the thin armour that comprises the cabin renders any potential the glass holds practically null and void.

The survivability of this vehicle lies in its compact size and speed, the Ystervark will endure at the hands of a shrewd and map-savvy player. The vehicle can hole up in smaller spaces or bury itself comfortably in thickets and bush. It can find itself nestled amongst burning wrecks or even climb into some building ruins. it also presents a small and hard to hit target when rushing away at its top speed to elude danger.

With a top speed of 89 Km/h, the Ystervark is a very fast vehicle. Compared to most other vehicles its weight of merely 6 metric tonnes renders it incredibly agile, able to clamber readily up steep slopes and turn tight corners without the loss of much speed. However this comes with one downside in the form of the reverse speed; the Ystervark has a reverse speed of only -13 Km/h meaning that getting into a position is easy, but not always as easy to escape it when things turn south if accelerating forward is not an option.

The suspension on the Ystervark is superb, maintaining a very stable base on the vehicle when performing manoeuvres such as turns on hills or crossing uneven solid terrain. The 20 mm gun is very much operable when driving at speed owing to the performance of this suspension even while stock.

As with all wheeled vehicles, beware such terrain types as: Snow, muddy ground and deeper sand. The Ystervark suffers greatly when it is bogged in these terrain types and loses its one greatest asset: its agility. 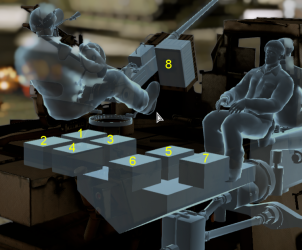 Ammo racks of the Ystervark

The Ystervark can be an exceptional ambush predator in the right hands. Whether your prey of choice is the flanks of unsuspecting tanks or aircraft buzzing overhead.

Staying low and unseen with a patient mindset when driving the Ystervark can be greatly rewarding to the player, with a 75 round fast firing belt of 20 mm ammunition the player can use their small size to lurk where aircraft will complacently fly low and not traditionally avoid (Like the opposing team's spawn where most SPAA prefer to seat themselves.). With this in mind the gun has the speed and accuracy to seize on opportunities created by the stealthy approach, often snapshot bursts are enough to bring an aircraft down with enough practise.

The same tactics can be employed on vehicles, however bare in mind the 57mm maximum penetration of the HVAP-T shells is the best the vehicle can get, further modifications from stock only change the belt composition. While this is sufficient for most medium tanks and light tanks the Ystervark will encounter at a BR of 4.3 in ground realistic there will be the appearance of many heavy tanks at this bracket such as the M6A1 at 5.0 or in a full up tier the Tiger H1 at 5.3. Neither of which the 20 mm HVAP-T can penetrate from the side.

When engaging aircraft such as strike fighters, it is advisable to employ a conserving attitude with trigger time. 75 rounds is sufficient but the fast firing rate of the 20 mm GAI C01 cannon can burn through that entire belt in just under five seconds (around 4.8 seconds during testing). With a 7 second reload from an untrained crew this can be enough time for a focused fighter to turn back and strafe the vehicle when it is completely defenceless if close enough, which owing to the non-existent nature of significant protection on the Ystervark will most of the time end in the vehicles demise.

Up until the early 1980s, the SADF anti-air regiments were reliant on towed equipment. However, as the military doctrine shifted towards mobile warfare, the need for a self-propelled anti-air gun unit became clear. As a result, South African engineers began working on a respective design, which had to be rugged enough to withstand the harsh South African terrain and threat of landmines, yet light enough to ensure a high level of mobility.

Building on the basis of a previous mine-resistant vehicle project, the engineers came up with a light SPAAG design, built on top of the Bulldog APC chassis between 1983 and 1984. Entering service almost immediately, the Ystervark was used to accompany South African mechanized battalions and to protect strategic assets, such as air bases in the southwest African region. Ystervarks were first employed operationally during Operation Thunder Chariot in 1984 - a division -scale exercise in South Africa during which the Ystervarks were first tested.

However, the Ystervarks didn't have to wait long for their first combat deployment. Taking part in several operations in the ongoing South African Border War from 1986, Ystervarks were used to great success as deterrents to low-flying Angolan attack aircraft and helicopters, even downing several Angolan MiGs in 1986 and 1987. After the conclusion of the Border War in 1989, the Ystervark was gradually being phased out of service in 1991 and replaced by the SAMIL 100 Kwêvoël mine-protected SPAAG armoured truck called the Bosvark. Officially, the Ystervark was withdrawn from active service in 1997 after more than 70 units were produced.