World War: To the combat troops

From War Thunder Wiki
(Redirected from World War: to the combat troops)
Jump to: navigation, search

Game mode with battles on the global map that are run in “Operations” format and are based on historical events.

The World War mode in War Thunder is represented by Seasons that have various scenarios, years of operations, available vehicles and theatres of war.

You can enter the World War interface using the “TO BATTLE” button menu, by selecting the “World War” option.

From here participation begins in the World War as the commanders of squadrons, their members or free players. Conditionally divided into three parts: 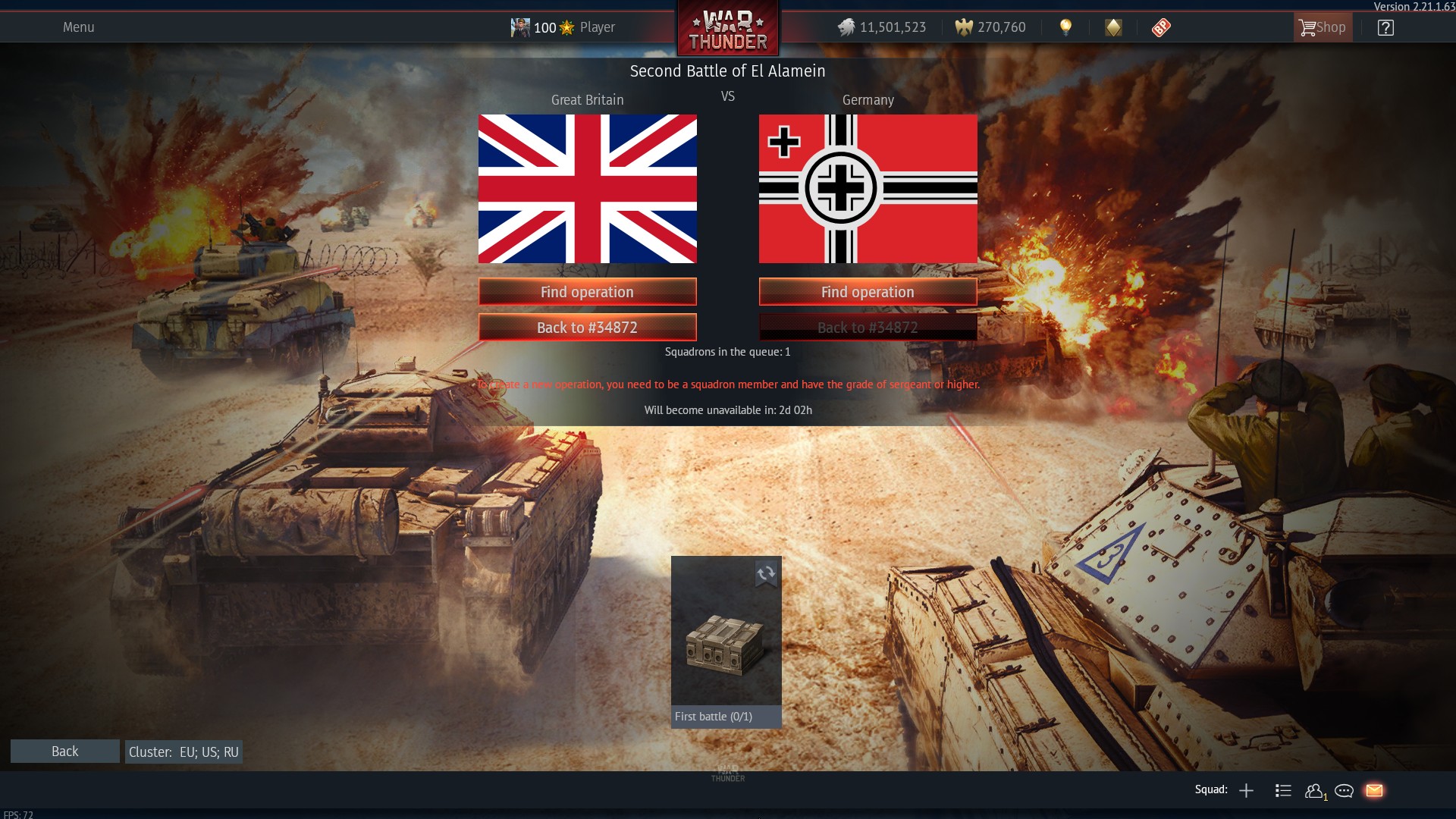 Window of all battles

This window contains a list of all available World War battles, the composition of armies involved in the selected battle, the time before a battle begins and other conditions. You can quickly find an interesting battle and join it. 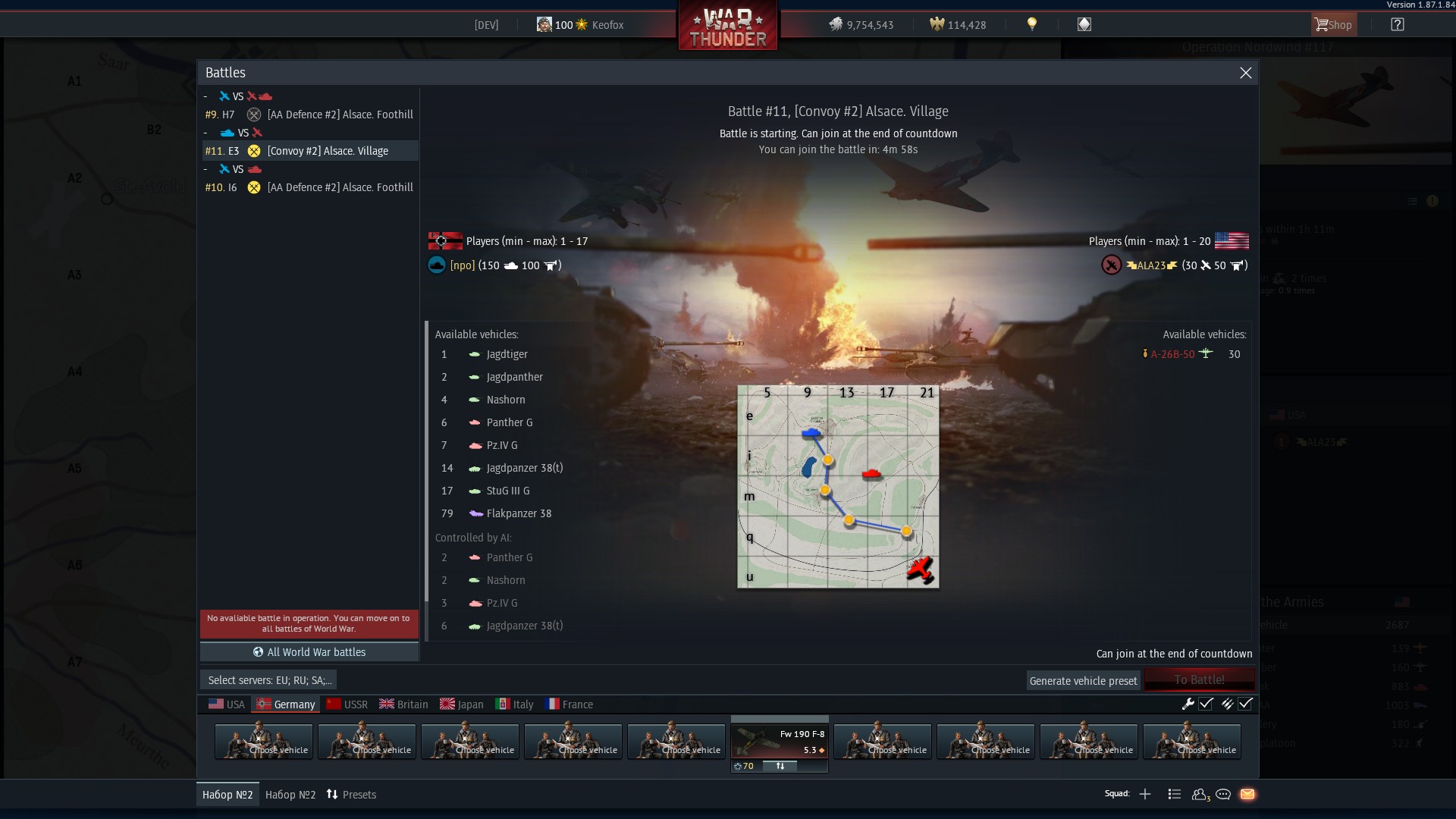 You are only able to use vehicles that form part of the battle army. Players will always receive one vehicle from each vehicle group of the army. If the player has already purchased other suitable vehicles from the vehicle group, those vehicles may be placed into a vehicle slot instead.

The vehicle will join the battle with all researched and installed modifications, but the player’s crew level will be whatever that crew’s slot is normally.

The process of placing vehicles into vehicle slots can be done automatically by pushing the “Generate vehicle preset” button. The mechanism will select, from all of the player’s vehicles, those vehicles with the highest BR for each vehicle group in the army and will put them into the vehicle slots with the maximum crew levels and highest crew qualifications in them.

Participation in the battle

After completing preparation for battle, a player selects "To battle!" and enters the mission, the tasks of which depend on many factors, including: the type of armies encountered, their composition, the conditions under which the battle has begun, and much more.

Upon entering battle, a player will receive from 1 to 3 randomly selected vehicles from the army and must complete the mission tasks in the allotted time.

Read the main article regarding the rules on distribution of vehicles among the participants, peculiarities of aviation armament and symbols.

A commander need to send the squad into battle. Members of the squad must confirm their readiness twice: the first time in the hangar interface, and then in the battle window - it is necessary to exclude the possibility of participants who did not have time to install the specified vehicles in crew slots.

There are no airfields in World War aviation missions, and the air reserve and aviation fuel reserves are limited. In order that a vehicle is not lost from the army, it is enough to fly to a special safe exit zone. A pilot in such a zone will be able to take the vehicle out of battle (button J) without losing it for the army.

Defeat in one World War battle does not entail catastrophic consequences for the entire Operation, as it was in reality, and often commanders resort to creating lost battles deliberately - for example, in order to delay an enemy attack. But every army has a morale index, which decreases with every defeat and increases with victory. An army whose morale index has fallen to zero will surrender to the enemy and disappear from the Operation map. Consider this in battle, even when fighting on the side of an unfamiliar squadron.

If you don't have an aviation army at your side in battle, the commander can send reinforcements in the form of aircraft at any time: fighters, attackers or bombers. Aircraft will begin to be distributed among the members of the allied side according to the usual rules.