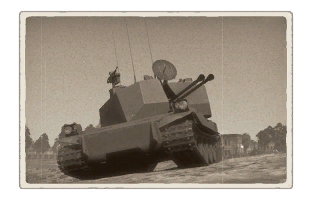 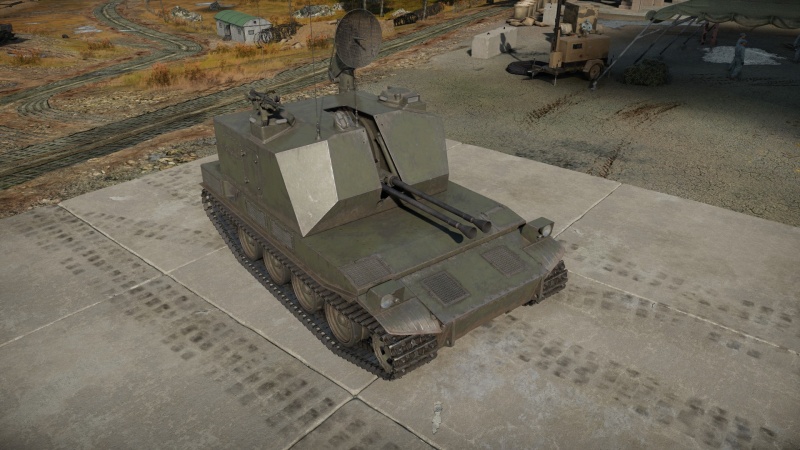 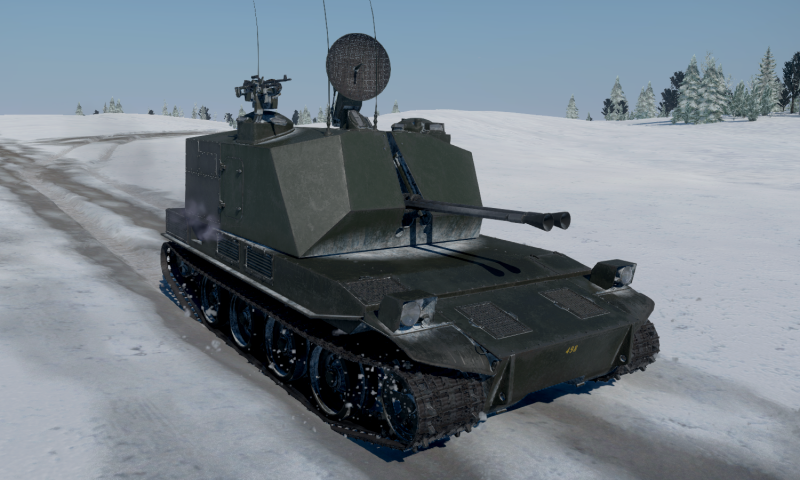 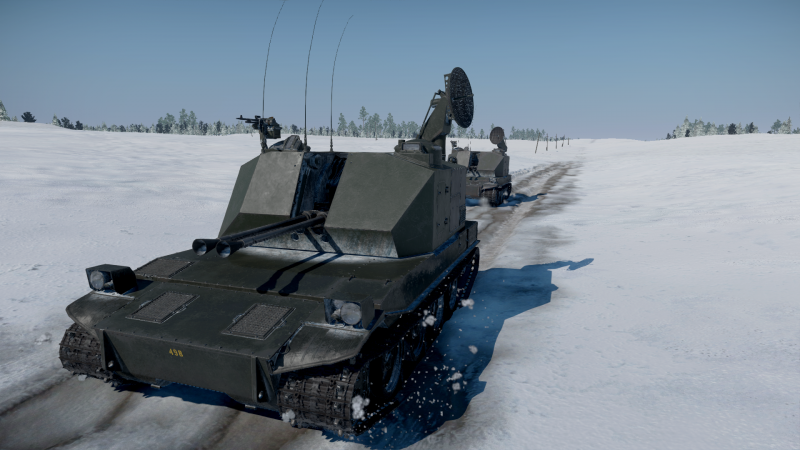 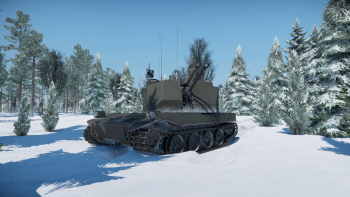 A VEAK 40 keeping the skies clear over Northern Europe.

The VEAK 40 was developed by the Swedish arms manufacturer Bofors by request of the Swedish army as a 1960s next generation Swedish SPAA following the 1940s limited production Lvkv fm/43 SPAA and failed 1950s Lvkv 42 prototype SPAA. A single prototype based on the Strv 103 chassis was built and delivered for testing in 1964. The project was delayed at this point but testing commenced and the vehicle proved to be ahead of its time regarding armament and fire control system. This however made the vehicle too costly and in the end the project had to be scrapped due to resources going to the Swedish air force rather than the Swedish air defense.

The VEAK 40 is armed with two 40 mm Bofors L/70 autocannons (Swedish designation: 40 mm lvakan m/48) which each have a fire rate of 300 rounds per minute and are capable of firing proximity-fused high explosive shells which will airburst and damage aircraft when reaching their vicinity. It has mediocre mobility and subpar protection but does feature excellent vertical and horizontal traverse speed for the guns. It also comes equipped with a tracking and search radar that allows the player to find and track airborne targets within a 12 km radius.

The frontal armour of the VEAK 40 is roughly 15 mm thick all around with very limited sloping angles to back it up. The gun mantlet, roof of both hull and turret, as well as the back are 5 mm thick and vulnerable even to 40 mm HE, as well as 7.62 mm MG at flat angles.

Heavy machine guns can knock it out by firing at the turret from all directions. The turret is also very big and boxy and also houses all of the vehicles ammunition and crew, thus a shot there usually results in an ammo rack detonation.

The hull however is fairly empty of components and only houses the transmission and engine which are located in their own compartment, resulting in tons of empty space in the hull under the turret. There is also a small internal screen to protect the turret compartment from stray shots. Attack to the lower hull usually leaves the vehicle combat capable.

The radar is placed too high to let vehicle hide behind a hill line, but it can be turned off and hidden behind the SPAA to reduce probability of a hit. 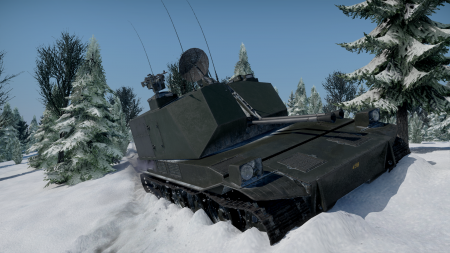 The VEAK 40 moving through though thick snow.

The mobility of the VEAK 40 is excellent. The vehicle is based on the chassis of the Strv 103A and features the same transmission and engine (although currently lacking turbine engine sound) while being 7.9 tons lighter. The engine gives out 540 hp in realistic when fully upgraded, giving this 29 ton vehicle a power to ton ratio of 18.62. This gives the tank great acceleration on shorter distances and allows it to effectively move around the battlefield like the average speedy light tank.

After those it is best to unlock the ammunition (slsgr m/484 HE-VT* and slpprj m/42B AP). Depending on the desired playstyle you can either go for the HE-VT or AP first. The slsgr m/484 is excellent for taking out aircraft, while the slpprj m/42B is great at taking out tanks in the side.

If you desire to kill tanks then go for mobility upgrades such as Filters, Engine and Transmission. This will allow you to easily flank and outmanoeuvre enemy tanks with some planning.

If you desire to kill aircraft then go for fire-control upgrades such as Horizontal Drive, Adjustment of Fire and Elevation Mechanism. This will give you one of the best targeting speeds in the game.

The last upgrade to unlock is Crew Replacement. Due to the limited survivability of the VEAK 40 and its ability to stay fully combat capable without one crew member there is rarely a need to restore a dead crew member. 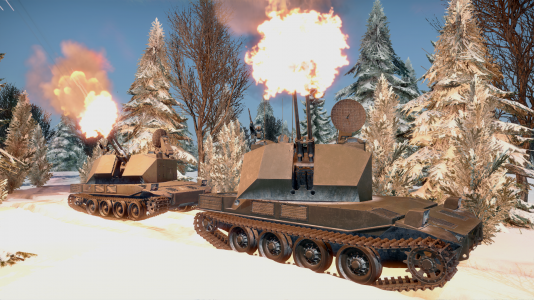 The downside compared to 35 mm counterparts is the questionable accuracy. It is also really easy to spend half of the ammunition without even noticing - each gun consumes a clip every 10 shots, but the UI presents it as 20 shots in the same box, which might be confusing. To avoid confusion, always divide current amount of clips by 2.

The ammunition of the VEAK 40 is excellent for its type. While not perfect in all regards, specific belts do what they are expected to and sometimes more. For example, the effectiveness of HE-VT* ammunition against aircraft is not to be questioned, with a bonus feature of being able to detonate above open-topped ATGM tanks like the Khrizantema-S or SAM with spectacular results. The penetration values even of the AP ammunition is too low to penetrate any heavy tank, but it can penetrate lighter tanks through weak spots in the majority of situations.

Beyond its main weaponry, the VEAK 40 also features a cupola mounted 7,62 mm FN MAG machine gun, in Swedish service designated 7,62 mm ksp m/58B. This is extremely rare for SPAAs and makes it one of two SPAAs that has a secondary machine gun (the other one being the Lvkv 9040C). Due to the characteristics of its main weaponry there is rarely a need to use the secondary machine gun, but it can be used when suppressing ATGM carriers or low flying helicopters (as VT shell requires 500 m range to activate and will not disable them at close range). 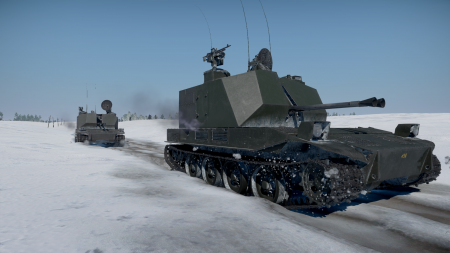 Two VEAK 40 driving in a convoy.

The VEAK 40 is a fairly basic tier 5 SPAA. It has a radar and effective anti air guns that will easily take out any aircraft even at longer ranges with ease. The guns also has fairly high penetration on its armour-piercing ammo and will easily take out lightly armoured vehicles in the front and the majority of vehicles in the side. Its protection is more or less non-existent and the VEAK 40 can even be dealt with using regular low-calibre machine guns. In arcade battles, it is one of the earliest anti-air vehicles with VT shells.

When playing the VEAK 40 it is best to stay in spawn and shoot at incoming aircraft, or using the great mobility to follow team-mates into battle and support them with suppressive fire and anti-aircraft support. If there are no aircraft to shoot at then it is viable to cruise around the map at high speeds and hunt lightly armoured targets and capture points.

Due to the large profile of the turret there are rarely options for hiding behind cover and thus it is best to play aggressively and using your high speed, stabilized guns and high fire rate to defeat enemy tanks. The radar mast retracts behind the turret like on a lot of other radar SPAAs when turned off, allowing you to become slightly less visible. Turning it off may be a good choice, if you are not looking to be spotted as easily if you believe enemies may be nearby.