Greetings, and this is the user page of godzilla5549. I have been playing War Thunder off and on since 2013.

I primarily play Realistic Battles in Ground and Air as well as Arcade Naval Battles. Recently, my focus has been on Naval due to my interests. I typically play American and German trees, although I have some progress in the Soviet tech tree as well.

I am a student of history and have a large interest in 20th century warfare, primarily naval warfare. While I am new to the War Thunder Wiki, I am not new to creating historical and factual write-ups of warships.

This page will mainly serve as a collection for things that I like to have on hand.

Here will be a series of empty tables to use.

This is an idea that I have come up with as a way to rework the progression in naval so as to alleviate balance issues and allow for correction of some battle ratings. While ground and air forces currently have a purely vertical progression system (progress down each line, with different lines for different vehicle roles), naval forces has a combined vertical and horizontal aspect to it. You must traverse the tech tree to unlock the sufficient number of vehicles to move down the tech tree.

Through this, you begin with horribly weak torpedo boats with a handful of machine guns but soon unlock torpedo boats that are much more armed. After, you can unlock motor gun boats that give up their torpedoes but have much more firepower. Then you move on to unlock submarine chasers and minesweepers, beginning with some of the weaker examples but eventually unlocking much more powerful ones with multiple auto-cannons and even heavy artillery (3" guns, automatic 6-pdr guns). These often lead in to large corvettes or frigates which dwarf the small torpedo boats they can face, but are armed with an array of guns to wipe the seas clean. You then move to research the finest examples of motor boats there are, some with very high powered torpedoes, others that are bristling with guns, some that have heavy armor and even a few with modern automatic cannons.

And then you unlock the first destroyer. And this whole cycle repeats again, with terribly weak destroyers giving way to far better examples. But then it all repeats again after unlocking the first light cruiser, which is also a weak ship in comparison to other cruisers. All the while, the battle ratings are compressed so as to keep a large portion of these ships fighting each other with massive gaps in relative power.

So instead of having this continue, I have decided to come up with a way to reorganize the progression of naval forces tech trees that would more closely resemble the progression model of ground and air forces. This will be a continual work in progress that will take some time, but I will hopefully keep it updated and will likely add on theoretical extensions of the tech tress with additional ships fitted in. 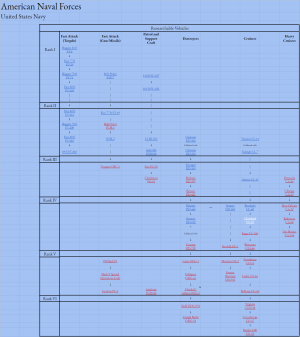 Update 5 October 2019: I have made a bit of progress on my idea, with a tentative tech tree for all of the nations that have a naval tree in the game as of current. I have also began to make an index of sorts to reference all of the relevant information for any ship that I have included (as well as any that is already in the tree). As an example, I will include a screenshot of the American tech tree that I have as of now.