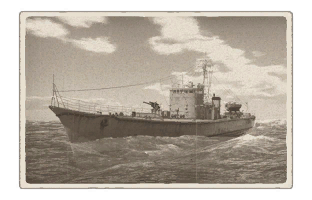 The Type K-8 No.13, Kusentei is a premium gift rank II Japanese sub-chaser with a battle rating of 1.3 (AB/RB/SB). It was introduced during Update "Hot Tracks" as a reward for the 2020 Operation W.I.N.T.E.R. event.

The Type K-8 No.13, Kusentei's primary characteristic is her exceptional survivability for the battle rating. With a crew count of 68, she's got nearly the double of the second-best vessel, and nearly 7 times the crew count of any US vessel in this battle rating. She's also the only ship within the battle rating to have 7 hull sections, at least one more than all the other ships. Overall this gives her an outstanding ability to survive even a focused gun fire from multiple boats.

That said though - the Type K-8 No.13 has some weak points to her survivability. First of all, she has one of the thinnest armour layers, making it impossible to deflect even the lowest calibre guns at nearly any range. Secondly her primary gun is fully exposed, leading to it being often disabled under enemy fire. And lastly her ammunition storage is exposed fully over the water level, directly under the primary gun, making for a significant chances of ammo-racking the ship.

The Type K-8 No.13's primary armament is a single 8 cm Type 3 cannon. It can fire up to 20 shots/minute of Type 0 HE shells that are relatively potent, with 480 g of TNT, being able to one-shot individual hull sections on most boats she'll encounter, but struggling with larger units like submarine chasers.

The more familiar with the K-8 will realize that on the 1942 refit there are no 25 mm's to be spotted unlike on the Type K-8 (1944) which would only get the anti-air package late in the war.

With the benefit of being a whole battle rating lower compared the 1944 refit, it has an easier time engaging targets and lighter targets to shoot at which will perish with most of the 8cm gun's hits.