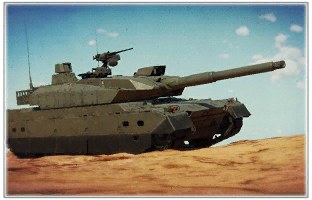 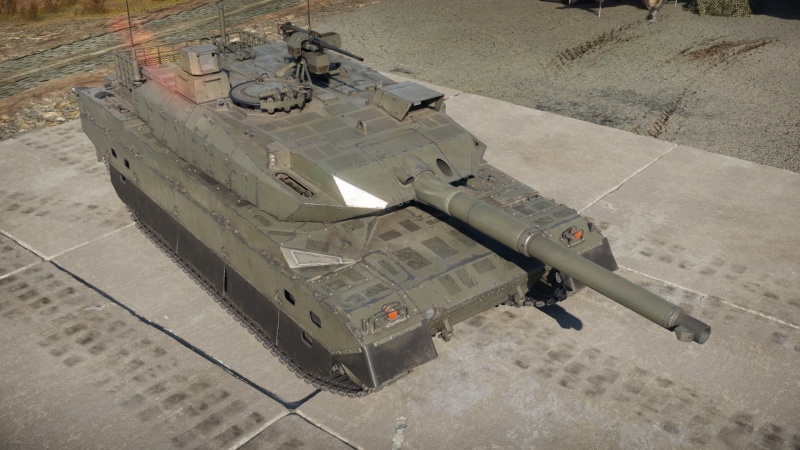 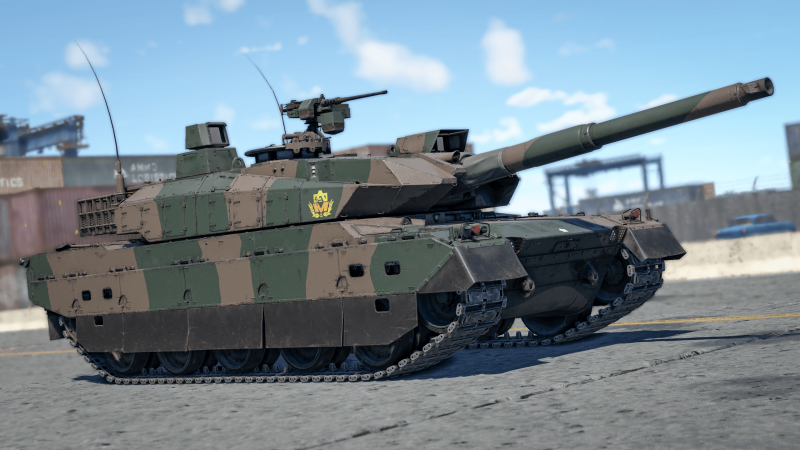 The Type 10 is a rank VII Japanese medium tank with a battle rating of 11.0 (AB/RB/SB). It was introduced in Update "Winged Lions".

Also known as Hitomaru (kun-yomi pronunciation of the number 10), the Type 10 MBT was initially accepted into service in 2010 (with effect in 2012) to replace or complement the existing Type 74 and Type 90 main battle tanks. Compared to its predecessors, there was a bigger emphasis on the C4I system, weight reduction, and modular armour.

The Type 10 was designed to be a lighter yet more protected version of its predecessor, the Type 90 (Kyumaru); thanks to advances in technology during the two decades and its overall design, the Type 10 reaches a high level of protection with an detachable composite block on the front of the hull, the turret has also been designed to fit new composite armour blocks. The overall protection of the hull front can reach up to 575-580 mm against kinetic rounds on average, while the turret is another story - with only frontal arc protection and around 500 mm of KE protection, chances are most darts at the same BR range can penetrate the turret with relatively ease, and turret sidescraping is not an option as the inner part of the turret has very little protection.

The lower glacis is yet another story, with its fairly large area and very low protection, it can be the death sentence of the Type 10 if the spalling after penetration spreads in a wide area and does fatal damage to the crew.

The huge hull can mitigate some spalling from KE rounds thanks to its relatively hollow battle compartment, but having only 3 crew members like the Type 90 means that a loss of 2 crew will result in a knock out.

Type 10 utilises a new domestic 120 mm smoothbore gun, developed by Nippon Steel Works; thanks to new alloy technology used on this gun, the new gun can fire rounds at even higher bore pressure, thus enhancing the penetration even more than Type 90. Another key feature is the 14 round autoloader that reloads every 4 seconds, located at the back of the turret, making Type 10 a very formidable opponent in battle.

The Type 10 is equipped with thermals for both gunner and commander and night-vision for the driver. these thermals have a resolution of 800x1200, this qualifies them as 3/2+ gen. thermals.

The stock shell that comes with the tank is very familiar to JGSDF players: JM12A1 HEATFS, equivalent of DM12A1 and M830 HEATFS of NATO guns. At top tier, it struggles to penetrate any modern MBTs with composite armour with up to 900 mm CE protection and its explosive filler is nowhere near enough to overpressure any MBTs as well, just enough to ruin the day for lighter vehicles or SPAAGs. However, thanks to the Type 10's above average mobility, taking the flanks is still achievable; and the reload rate is forgiving for misplaced shots, players might still have a second chance to knock out the enemy's gun or the whole tank right away with its 4 second reload.

The first kinetic round is another familiar shell as well: JM33 APFSDS, equivalent of DM33, at tier I modification. Players who have experienced the Type 90 duo knows how the shell struggles when facing the masses of Soviet/Russian MBTs with sturdy front arc protection; only well-placed shots on their weak spots or lower glacis can knock them out. This is still far superior to the stock JM12A1, and should be a priority for research.

The final researchable shell is the brand new Type 10 APFSDS, which is also the latest shell of JGSDF that came commissioned with Type 10 itself. New technologies on this dart boost both its penetration and velocity - delivering a whopping 615 mm of penetration every 4 seconds can certainly be the nightmare of any tanks trying to break through the frontline.

The Type 10 mounts two machine guns; one pintle-mounted 12.7 mm and one coaxial mounted 7.62 mm. These can be used as deterrent for aircraft, clearing light obstacles or crew from open-top vehicles, or spotting enemy vehicles.

Type 10, the latest MBT of the JGSDF, is designed to serve as an alternative to the previous Type 90. They share many similarities such as a high-power diesel engine and firepower, but the Type 10 also received vast upgrades in terms of protection and ammunition thanks to the advance in technology.

To handle a Type 10 to its greatest extent, players should keep in mind that speed is still their friend, but the UFP armour is also something that can be relied on thanks to its around 580 mm KE protection. Although it might not have the strongest frontal arc among top-tier tanks, this could help stop a few rounds, enhancing its survivability against its enemies. For less aggressive gameplay, Type 10 could find a ridge line and stay behind it, its gun depression and hydropneumatic suspension can further enhance its odds to survive against masses of enemies; while being aggressive is also viable, but players should keep in mind that the LFP is paper-thin in MBT standards, a well-placed shot can knock out multiple crew members, resulting in a kill for the enemy. Its tank gun with 4 second reload, superior FCS with one of the latest TVD sights and new Type 10 APFSDS certainly can be nightmares for groups of enemies trying to break through the line. Alternatively it could be a second-line tank for a group of tanks, its rate of fire certainly could save frontline players if they missed the chance to knock out an enemy with a single shot. Its high reverse speed also gives the type 10 the ability to back out of tough front-line situations and/or when you're on a ridge line and your LWS goes off. With this big mobilty advantage combined with the fast reload makes for easier combat controle and giving you more options where, when and how you engage a target.

In the mid-1990s, after the introduction of the previous TK-X, Type 90 (Kyumaru), the Ministry of Defense (防衛省) soon realised that, despite its superior FCS even for NATO standards, further upgrading the Type 90 would be impractical (for the time being) due to its already heavy weight in Japan's standards; while the previous Type 61 (Rokuichi) had no chance when facing even the earliest MBTs and Type 74 (Nanayon) was too costly to be upgraded. The possible rivals of Japan, like Mainland China and the Russia Federation had already developed their new MBTs (PLAGF ZTZ96 and ZTZ99/Russian T-90A); in view of maintain a team of tank designers as well as a part of national defense, JGSDF passed a new plan for a next generation MBT with redundancy for further upgrades (modularity), thus inherited the project name: TK-X. 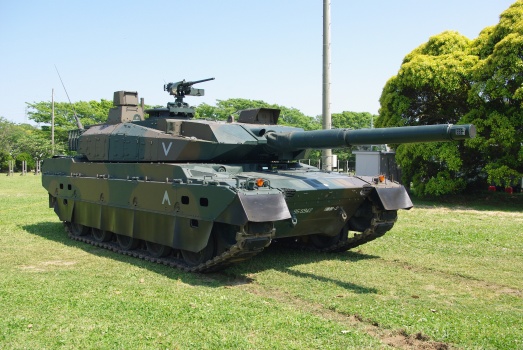 The TK-X project aimed for the light weight of a Type 74 (at 40 tons, loaded) while being smaller than Type 90, equipping a domestic 120 mm smoothbore gun with latest C4ISR system, modular composite armour, and new engines paired with HMT transmission. TK-X was lead by Technical Research and Development Institute (防衛省技術研究本部; TRDI) with help from Mitsubishi Heavy Industries (三菱重工; MHI). The new smoothbore gun and its new APFSDS was developed by Nippon Steel Corporation (新日本製鐵) and Daikin Industries (ダイキン工業) respectively. These designs had been tested on a Tank Test Bed (TTB) developed from the 6th prototype of Type 90 and was first shown in a booklet in early 2000s; the result of TTB proved the designs and project TK-X started from 2002. The 1st prototype was assembled at November 2004 and tested at JGSDF Camp Higashi-Chitose (東千歳駐屯地); MHI built the 2nd prototype in 2005, while there were also 3 Type 90s converted as the test bed for tank platoon command systems.

Finally, with the evaluations from JGSDF Fuji School (富士学校), Ordnance School (武器学校), and leaked photos of the 2nd prototype, TK-X was unveiled on 14 June 2010 to the public during the opening of JGSDF East Fuji Manoeuvre Area (東富士演習場) and it was then named Type 10 at October. It served as the most advanced MBT of the first decade of the 2000s, and is an icon of the JGSDF moving forward into the 21st century.