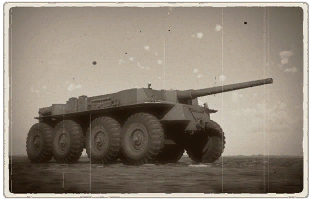 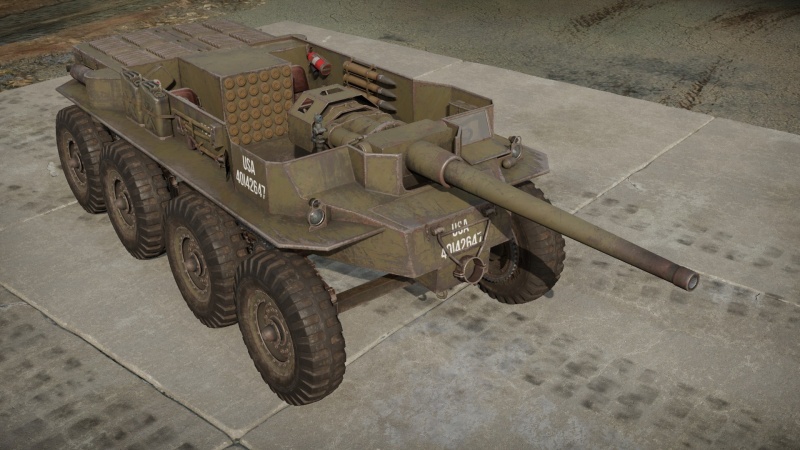 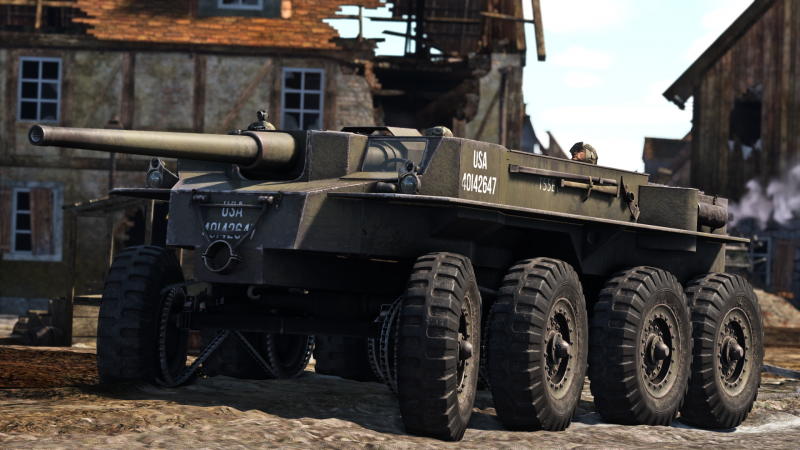 The 3 inch Gun Motor Carriage T55E1 is a premium gift rank III American tank destroyer with a battle rating of 4.3 (AB/RB/SB). It was introduced during Update "Hot Tracks" as a reward for Battle Pass: Season II, "Steel Centurion".

The armour on the T55 is next to none, even a random burst from a machine gun can easily kill you or critically wound your crew. However, as the armour is paper thin, APHE shells tend not to detonate inside your tank. Your most dangerous enemies will be vehicles equipped with heavy machine guns or autocannons. The ammo rack is your biggest weak spot, however if you only load 10 or 12 shells, your side racks are empty and your centre rack is mostly empty. Any plane is a danger and you should seek cover and hide from them.

The T55 can move at around 80 km/h (50 mph) forward and backwards. It drives more like a car than it does a tank and has a hard time to flip. Your wheels can also allow you to climb to vantage points before anyone else.

The T55E1 uses the 76 mm M7 as its main and only armament. The 76 mm M7 cannon is a high velocity anti tank gun, and can punch through the armour of most tanks all the way up to 6.7. The M62 APCBC shell has enough explosive filler to take down most tanks in one well aimed shot. This cannon may be familiar to players as it is the same armament present on the M10 GMC as well as the M6A1, as well as being similar to the later Shermans' 76 mm cannon. The vehicle however possesses a noticeably better reload than all the aforementioned vehicles due to having 2 loaders. That said, unlike the previous vehicles, the T55E1 not only lacks a turret but also posses a very limited horizontal guidance.

The T55E1 is able to use 3 different types of ammunition: AP, HE, and APCBC. 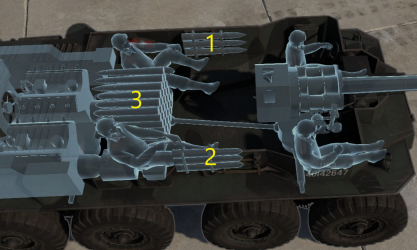 You should use the T55 as a flanking vehicle or sniper at the beginning of the match. Your speed outclasses other vehicles and you can use it to get to a flanking position or a sniping point before anyone else. Then use your gun's excellent angles to aim at a place where you can see the enemy's side. As mentioned above, try to avoid MG fire and if you can. It is not recommended to shoot on the move as you will tend to miss your shots. 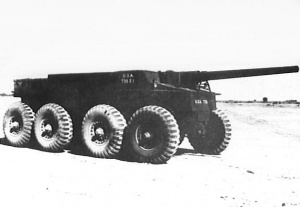 The Cook Brothers Equipment Company designed an experimental 8x8 wheeled desert vehicle which a prototype of was completed by 1942, according to photographic evidence. The vehicle used a chain drive, and the wheels were set up in two 4x4 bogies, each with it's own engine. The desert vehicle was used as the basis of a wheeled tank destroyer after they received a contract from the US Army in August 1942. One prototype was built by the Allied Machinery Manufacturing Company and was called the T55 GMC (GMC standing for Gun Motor Carriage). The T55 had the front engine moved to the rear of the hull in order to fit the main armament, a 3 inch or 76.2 mm M7 gun, at the front of the hull. After initial testing of the T55 GMC in December 1942, the Cook Brothers were requested by the Army to design an improved version. 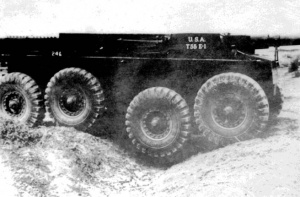 The redesigned version of the T55 GMC was named the T55E1 GMC and it was basically a simplified version of the T55; both the T55 and T55E1 gained the unofficial nickname of "Cook Interceptor", signifying their designers. The largest visual difference was a much lower profile. The T55E1 GMC retained the 76.2 mm M7 gun from the T55 GMC, which was mounted in the front of the hull; it was casemate mounted rather than turret mounted. The T55E1 was lighter than the T55 it was based on, and as such it had a significantly improved driving performance. Powered by two Cadillac engines at the rear, the maximum speed of the T55E1 was 80 kilometers per hour or 50 miles per hour.

The single T55E1 GMC prototype was completed in early 1943 and underwent testing at the desert proving grounds of Fort Irwin in California. In the same year the Army decided that all self-propelled gun designs would be based on tracked tank chasses rather than on wheeled chasses. As such the T55E1 GMC project was dropped and it never entered production.

The American T55E1 wheeled tank destroyer was created on the chassis of an experimental all-terrain 8x8 vehicle. The Cook Brothers company received an order for the development of the project in August 1942, and in the fall, the first prototype, named the T55, was ready at the Allied Machinery Manufacturing facility. After the first tests, the military suggested that the designers modify the vehicle, since some issues appeared during the tests. So, at the beginning of 1943, the T55E1 appeared - a more densely assembled and improved version of a promising self-propelled gun.

The T55E1 role in combat was assumed as fire support of advancing infantry, while being able to operate on any type of surface. The T55E1 had no turret, and the massive 76 mm M7 gun was located on the front of the vehicle. This arrangement required the shifting of the power plant of two 110-horsepower engines to the vehicle's rear. At the same time, the SPG received a low profile, sufficient traverse angles and excellent elevation angles. The upgraded T55E1, due to improved driving characteristics and a decrease in total weight, showed a speed of just over 50 mph (80 km/h) in tests and good results in overcoming obstacles. At the same time in 1943, a special commission recommended that the army completely abandon the use of armoured wheeled vehicles in favor of tracked platforms, and the Cook Brothers project was closed. But we are sure that this curious tank destroyer will definitely find a place in War Thunder!