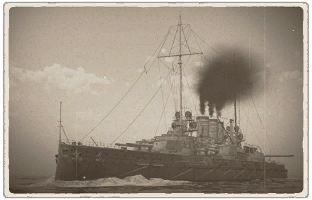 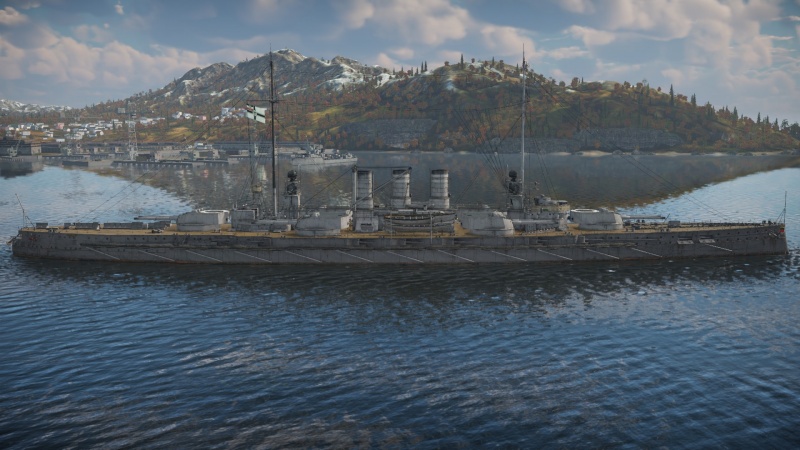 The Helgoland-class, SMS Helgoland, 1911 is a rank V German battleship with a battle rating of 6.3 (AB/RB/SB). It was introduced in Update "New Power".

This Helgoland-class dreadnought comes with a thick side armoured belt of 300 mm, and other places being 90 to 170 mm thick. This can stop 356 mm HE rounds except at the higher sections of the bow and stern.

All 6 turrets have thick barbettes, which AP shells have to go through after the already thick side armour.

Ammunition is surrounded by coal bunkers, in addition to a turtle-back armour scheme.

In short: she is one of the toughest battleships in the game, as long as she faces fair opponents.

To survive longer, do not repair secondary battery. Doing so will remove crew from your armoured hull and put it in the vulnerable secondary turrets, for them to be killed again.

Being a dreadnought, it was all about armour and firepower. She will reach a little bit over 38 km/h maxed out.

Her primary armament is somewhat lacking for her size. She has 6 turrets, but only 4 can fire at a broadside. 3 can fire most of the time and worst case scenario only 2 will fire.

Her turrets have each double 305 mm guns, this is somewhat lacking for long range fights.

While her primary armament is lacking, she makes it up with great secondaries.

She has fourteen 150 mm guns in casemates all around the ship, and fourteen 88 mm guns with fragmentation shells. Torpedo boats will not like getting close to you.

Even her 150 mm are a real threat to any destroyers, even light cruisers.

She comes with fixed underwater torpedo tubes. Being an old ship, her torpedoes are not remotely good.

She carries a total of sixteen torpedoes, in several launchers: 1 forward, 1 rear, 2+2 per broadside.

Her torpedoes carry only 160 kg of TNT, which may not be enough to break through the torpedo bulges of other dreadnoughts and heavy cruisers. This means that several hits are needed. 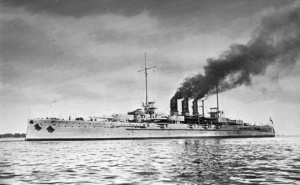 SMS Helgoland was the lead ship of the Helgoland-class of pre-WWI dreadnought battleships. Being an incremental improvement upon the preceding Nassau-class battleships, they featured a more powerful 12-inch (305 mm) battery and improved propulsion system. Built in 1909, she saw service in World War 1; she served in the raid on Scarborough, Battle of Riga, and Battle of Jutland. After the war, Helgoland was handed to the United Kingdom as a war reparation; she was scrapped in 1924.[1][2]

The Helgoland-class was of overall similar construction to the preceding Nassau-class. They displaced 22,500 tons standard, and with 28,000 shaft horsepower, were capable of making 20 knots (37 km/h).[1] The Helgoland featured a unique hexagonal main armament arrangement, similar to the Nassau-class, but had a higher-calibre main battery of twelve 12-inch (305 mm) guns in six twin-turrets.[1] The Helgoland also carried numerous 5.9-inch (150 mm) guns and 88 mm guns in casemate mountings.[1] She later gained four 88 mm high-angle anti-aircraft weapons, but this is not reflected in the game. As a result, the 1911 Helgoland didn't have any anti-aircraft protection. Finally, the Helgoland carried six 50 cm torpedo tubes mounted underneath the waterline.[1]

The Helgoland was laid down in November of 1908, named after the Heligoland archipelago in the North Sea.[2] She was launched in September of 1909. She was completed and commissioned on August 23rd 1911, after the completion of three years of construction.[1]

The Helgoland entered service with the German 1st Battle Squadron, which formed the core of the German battleship strike force.[2] She participated in some training exercises before the war, along with her sister ships. After the start of the First World War, Helgoland saw her first combat action at the Raid on Scarborough, Hartlepool, and Whitby. Due to heavy fog, the British and German forces never directly engaged despite the fact that Helgoland was at one point just 10 nautical miles away from the British fleet. Helgoland later participated in the Battle of the Gulf of Riga, though she failed to see major combat action.

Helgoland participated in the Battle of Jutland, where she was located at the centre of the German battleship line. As a result, she saw less action than ships at the front of the formation, such as the battleship Konig. Despite this, Helgoland still fired 63 12-inch shells, and took a hit from a 15-inch shell that caused a moderate amount of flooding.[1][2] The battle of Jutland was a tactical victory for the German fleet, having lost less ships and men than the British. However, it was a strategic victory for the British as the German grand fleet would never set sail in large numbers again.[1][2]

Helgoland, along with her sister ships, were docked at Wilhelmshaven until the end of the war; she was supposed to participate in the suicidal German raid against the British fleet, in an attempt to secure better surrendering conditions.[2] However, this failed as the sailors manning the ship mutinied.[2] Thus, Helgoland was handed to the British as a war reparation, along with her three sister ships. She was eventually scrapped by 1924.[2]