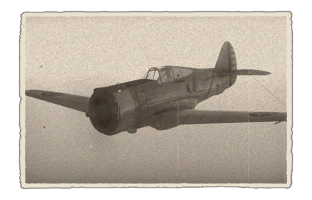 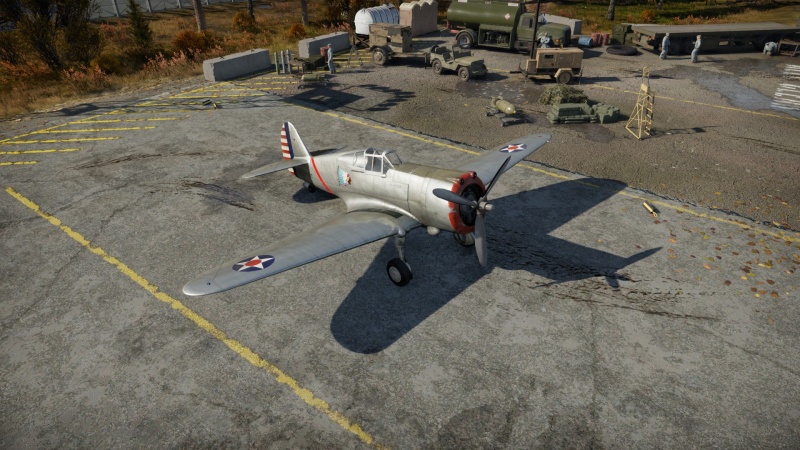 The P-36A is a relatively easy fighter aircraft to fly and requires only a relatively short space to both takeoff and land. During World War II the P-36 was ferried over to Pearl Harbor aboard an aircraft carrier from which they took off and then landed at the Army Air Corps base.[1] In the game, due to the very low stall speed, the P-36 can land on an aircraft carrier to a complete stop and take off again. Due to the fantastically low wing loading rate of 23.9 lb/ft2[2], this fighter is an excellent turning aircraft and accompanied by a strong rudder can spiral climb easily especially during WEP cycles. This aircraft has the advantage of being both a turn fighter and a Boom & Zoom fighter, depending on the situation, type of aircraft which are flying against and mission type. The P-36 will out-turn many fighters of its rank and can prove difficult to follow if attempting to shoot it down.

As with many early pre-war fighters, not much emphasis was put on the survivability of the aircraft. The best course of action was for the pilot to not let anyone get behind them. The P-36A's only sources of protection for the pilot is the engine block and the 9.5 mm (angled at 24° for effective thickness of 13 mm), that being said, depending on the engine block to save the pilot may do so at the expense of the engine, thus requiring the pilot to glide back to base if possible or bailout. The P-36 lacks self-sealing fuel tanks, so if any of the three are punctured (one directly behind the pilot and two below the pilot's feet) they will leak fuel and if accompanied by fire, will rapidly degrade the aircraft structure to failure and destruction.[2] There are also two unprotected oil coolers if which are punctured, the aircraft will leak oil until depleted eventually causing the engine to seize up.

For the P-36A fighter, the armament of a single 12.7 mm and 7.62 mm machine gun is quite weak in comparison to the level of performance this aircraft is capable of. Later Hawks rectified this situation by adding two or four machines guns. For this aircraft, both machine guns are mounted in the engine cowl and fire through the propeller arc. The disadvantage to this is that the machine guns' rate of fire is limited since they're synchronized with the rotating propeller. However, with these guns nose-mounted, there is little need to adjust for convergence. Options in ammunition will allow the pilot to select the type best suited for their mission whether it be as an interceptor, ground target hunter or a stealthy pouncer.