This article will explain how to create custom missions with some of the available game modes, for example the Free For All game mode where there is no teams and everyone fights against each other, or the Race game mode where you can race against other players. Basic knowledge about multiplayer mission creation is required, you will also find there how to add slots for players which will not be explained here.

Free For All (FFA)

In this game mode there are no teams and everyone is fighting against each other, depending on the mission settings it is or not possible to respawn during the battle. In the statistics list there is only one long list of all players and they are sorted by the kills amount. This is the most basic and simplest to make game mode, you only need to enable the special setting in the mission editor and then add spawn zones around the map. It works for all unit types. Players will not be in the same team even after switching the team to the same one in the custom battles lobby screen.

Setting up the mission settings

It enables the FFA mode.
GT_FFA can also be used and the only difference between them is lack of the kill counter at the top of the screen.

Airplanes, Tanks, Ships or Helicopters, you can see more than one type.

By default with this option disabled it is 500, one kill in game reduces the number by 100 but it can be changed in deathPenaltyMul setting which sets a multiplier of the default number, so for example when it is set to 0.1 every death will decrease the tickets amount by 10.

Remember to not put them close to each other, especially if it will be for tanks or ships only, then after the spawn units should not be able to see each other for at least 20 seconds. There is an option which let you put the an objects which check the visibility from the certain point (its position), it can be accessed by pressing the Create view point which is located next to the icon for creating waypoints, then put in on the ground and press the F1 button to enable it.

2. Set up the trigger

It will make the spawns selectable right after the mission start

These two options need to be enabled in order to make this game mode work.

Race game mode is a mission type where all players are flying, driving or sailing through the circles, the first player to reach the final circle wins. At the top of the screen there is a time counter and a number that shows your place. It can be made for all available units types. There are no teams, all players are flying are each other.

Setting up the mission settings

It enables the Race game mode.

Airplanes, Tanks, Ships or Helicopters, you can see more than one type.

2. (Optional) Disable the ability to shoot during the mission
2. Add the mission tags

It will be later used to set different spawn for the normal and reversed track version.
Make sure that you have a squad unit with all players units in it.

Waypoints in this game mode are used to set the race track, if you want to make a track that is supposed to have more than one lap then the last waypoint should be close to the first one.

1. Create areas
All of them need to start with the same name and have the number at the end, their order also matters, they can not be placed in order like 01 → 03 → 02. 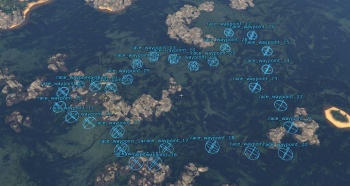 Spawns need to be placed just before the first waypoint and their direction should be set towards it. 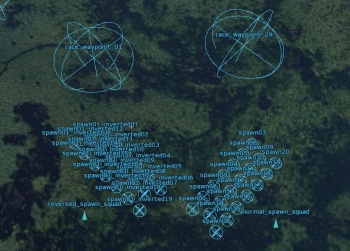 You can just copy the first set and in the Clone window set the name to spawn_reversed_01, they will be named automatically after that.
This set will be used for the "reversed" configuration.

This condition refers to the missionType{ code block.

It will allow the game to use specific spawn zones sets for both configurations, it can be done so there is the same spawn zone for both but it can cause some issues.

Now it should be possible to select a different spawn in the normal and reversed version.

Setting up the triggers

The next step is to assign all created areas for the track to an action.

This is a preliminary set up to show the time counter.

3. Add an action to begin the race mode

If enabled it will allow the player to see two waypoints at the same time, the one that is the closest and the next one.

It controls how big will be the waypoint marker (circle for planes, arrow with a circle under it for ships and tanks).

It sets the respawn position offset after the player dies, makes the vehicle appear in front of the waypoint.

4. Copy the beginRaceMode action
It will allow the mission to load the track's waypoint in the reversed order.

The next needed trigger is a trigger that checks if there are any active players.

1. Create a trigger that check for active players

Another thing that is required to make everything work is a time counter that shows when the race will begin.
This part is a little harder because the next trigger will use two variables.

This will make the trigger activate when there are active players in the session.

Needs to be set to 1 to make it subtract the start_time_integer value by 1 every second.

This condition will keep changing the number of start_time_integer variable until it reaches 0, at the start of the mission it should be set to 20.

Everything from this part will be repeated until the integer number reaches 0.

This will set the value of the start_hint_string string to the text that is stored in the main game's CSV file, in this case it will be Race starts in: .

This variable will be subtracting the start_time_integer variable's value by 1.

This will add the number to the text which will be shown on the screen, in this case it will add current number from start_time_integer, for example 3, to the start_time_string value, so it will shown as Race starts in: 3 in game.

Used to show the text in game.

Everything from there will be activated when the integer number reaches 0.

Optional and only for planes, it will make it so all players will have a smoke effect coming from the their wing tips, you can find that option under the Visual params.

Set to empty value to hide the text.

3. Disable shooting during the race