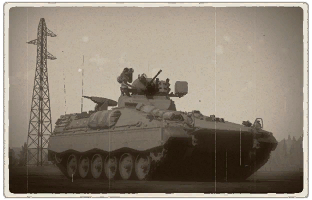 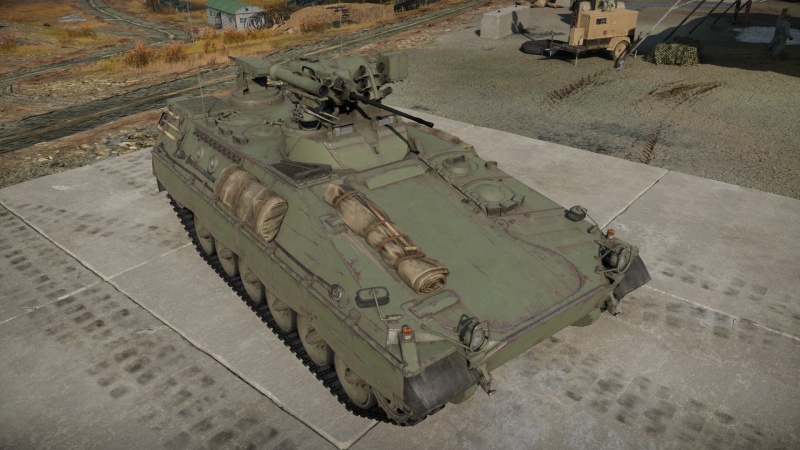 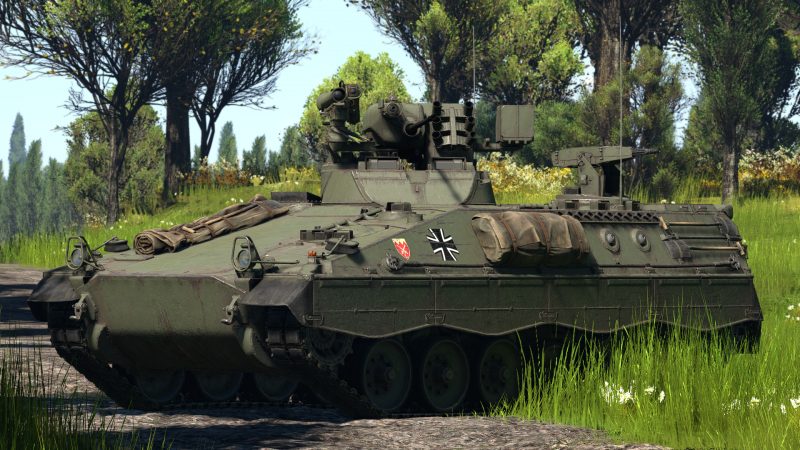 The SPz Marder A1- is a rank V German light tank with a battle rating of 7.3 (AB/RB/SB). It was introduced in Update "Red Skies".

Being the first true German IFV in the tech tree, the Marder A1- offers some unique options to its operator with regards to dispatching its opponents, no matter if they come on the ground or in the air.

Overall, armour on Marder A1- is to be expected from an IFV; thin armour that relies heavily on slopes for protection. However, the turret is unmanned and coupled with a great gun depression of -17°, allowing for a hull-down really well.

From the frontal arc, the armour can shrug off most heavy machine guns and autocannons up to 23 mm calibre, like those found on Shilkas. Be wary though as lucky shots can get through the turret ring or shatter on the driver's optics, sending shrapnel inside the fighting compartment.

From sides and rear, even .50 cal will do some serious damage to the vehicle and crew, so keeping the front of the armour towards the enemy is the key for survival from MG fire.

With only three crew members available, the Marder can't afford to take any hits. When looking at Marder from the front, the driver on the right side is protected only by an 11 mm thin armour plate angled at 73°, so expect the driver to die first a lot to enemy fire. Meanwhile, both commander and gunner sit side by side below the unmanned turret, protected by transmission and engine (similar to Merkava tanks). While that won't protect them from rounds with explosive filler or modern kinetic penetrators, it can negate shrapnel from older chemical and HESH rounds. Commanders and gunner survivability are thus significantly higher than that of a driver, allowing to fire back at the opponent in most cases.

The last thing to note about the armour is that the roof armour is only 11 mm, making the Marder heavily vulnerable to air attacks if the gun isn't trained on the attacker.

The mobility of Marder is really, really good, allowing it to rush favourable positions at the start of the battle or flank effectively. With a reverse gearbox, it can move backwards as fast as going forward, making disengaging from an enemy or retreating from unfavourable situations an easy task.

Since the Marder A1- is already powerful in the firepower department thanks to its MILAN ATGMs, even in its stock configuration, it should have no problems dispatching your enemies. After Parts and FPE, one can either start upgrading its mobility or go for a fuller APIT belt to have better chances when fighting light vehicles.

Since it can't engage enemies at longer ranges with the autocannon and MILANs are SACLOS-guided, getting a laser rangefinder is not a priority when playing solo. Instead, going for optics upgrades and smoke grenades might be preferable. Night vision devices could be also considered, but night battles on this BR are uncommon.

The Marder A1- is armed with a dual-feed Rh202 20 mm autocannon. This gun can also be found as a secondary weapon on the KPz-70 and Leopard 2K; the difference being it gets dedicated belts on Marder instead of being limited only to multipurpose stock belts.

Rh202 has fantastic gun handling. Even though it is not equipped with a stabiliser, it's barely noticeable even when firing on the move, allowing to successfully engage enemies without stopping at close range.

With a great rate of fire (noticeably faster than 30 mm found on BMP-2s), it can shred light vehicles, low flying planes and helicopters to pieces in a matter of seconds. Even heavier tanks are not safe since it is able to disable their critical components with a well-aimed burst, crippling their main and secondary armaments and tracks, making them easy kills for its MILANs or more-heavily armed teammates.

With 65° degrees of gun elevation, it can even work ad hoc as makeshift SPAAG. This is especially useful against helicopter rushes, which are common at the start of the round when chances of friendly SPAA being active are low. Even planes are not safe when the Marder is around, since it is able to successfully engage low flying aircraft with enough practice.

Rh202 operates on 200 round belts, Marder can take 6 of them in total and you can switch between different belts with ~1-second delay. An empty belt is reloaded after 8 seconds when Aced. 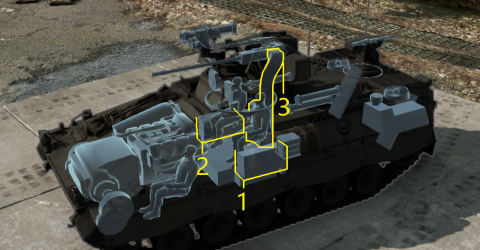 Ammo racks of the Marder A1-

The Marder A1- is armed with a MILAN ATGM launcher with SACLOS guidance. It's an older missile, lacking a tandem warhead, but since composite and reactive armour is a rare sight at the battle rating, it works wonders. It is the main weapon of choice when engaging targets beyond 200 m and when engaging anything heavier than a light tank or SPAAG. The Marder only gets 4 of those, so firing them recklessly can leave it unable to dispatch heavier opponents. Frequent visits to capture points are a must in order to keep fighting.

To fire them, the Marder A1- needs to be going slower than 5 km/h, which can be disadvantageous against enemy tanks with stabilisers - be sure to distract the enemy first with the autocannon fire or make sure the enemy doesn't know at all from where the Marder will be striking.

Also, be aware that the launcher can't depress as much as the autocannon - this is of utmost importance when fighting in hilly terrain. While it is possible to fire and hit an enemy, the missile needs a few seconds and distance to correct itself, making close-range shots impossible without considerable skill and practise (for some theory on this, visit Striker wiki page).

MILANs are guided in a SACLOS manner, meaning they follow the crosshair, making them much easier to use than older missiles such as SS.11 or Malyutkas. The Marder is also one of the earliest vehicles to get SACLOS missiles, together with Ratel 20 and BMP-1, and unlike BMP-1, the Marder is equipped with it stock.

The last thing to note about these is their limited range - just 2 km. Most of its engagements do happen inside this range, but on larger maps such as Maginot Line, it won't hurt checking enemy distance with the laser rangefinder before firing.

As SACLOS missiles, they can be used with some success against ATGM helicopters hovering on the battlefield, but again, checking their range is necessary in order not to waste the few missiles it has.

The Marder is armed with two MG3 machine guns. One is coaxial to the Rh202, second is in a small independent turret above the troop compartment.

The MG3 is the standard machine gun for current day Germany. While having a nice rate of fire, they are rifle-calibre and thus have very low penetration, useful only as a deterrent against low flying aircraft and helicopters and to clear obstacles in front of the vehicle. They are almost useless against enemy tanks, and only pose a threat to few open-topped vehicles.

One thing of note is that the second MG3 in its independent turret can only turn in a 90° degree arc on the back of the Marder, thus making it way less practical than the coaxial. It can be used to paint enemies that manage to sneak up on to you from behind, or, if you turn your back against incoming aircraft or helicopters, to increase your firepower against them. Other than that, it only blocks your Rh202 from depressing on the back of your vehicle.

By using the "Select machine gun" key, it is possible to scout enemies with sniper mode from this turret in realistic battles. This allows only the empty rear of the vehicle to be exposed, which, even if shot at, can keep the crew quite safe.

Marder A1- is a pretty decent IFV for its rank, but it is not designed to fight enemy tanks head on.

Best strategy is to either rush favourable positions near capture points in order to spot and counter enemy light vehicles rushing them while occasionally firing your ATGM at high-value targets.

Another good strategy is to go for flanks - most of the time, you will meet enemy light vehicles flanking, and your autocannon shreds them like cheese, denying enemy flanking routes and funnelling them towards your allied tanks. Keep spotting, and save your ATGMs for self-defence, since you will be away from capture points in this scenario and thus unable to rearm. That doesn't mean you can't take out high value targets such as top tier tanks which happen to drive into your sight line.

If forced to CQC or brawl, try to stick to your allies and support them. As soon as you see enemy tank fire, rush him and disable his gun and tracks, making him an easy target for your team mates.

If there are no allies in close proximity, then your speed and ability to fire on the move can be exploited in aggressive pushes, but narrow corridors and streets often present major disadvantages for your lightly armoured IFV; so sticking to ambush tactics might be preferable.