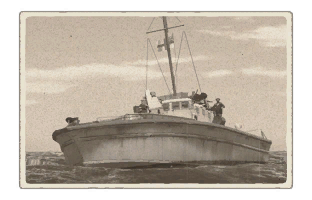 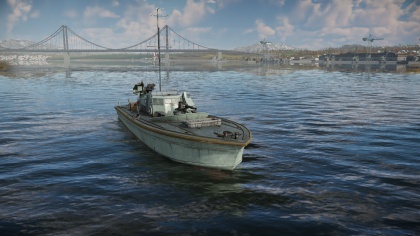 MGB-75 has the following armour layout: 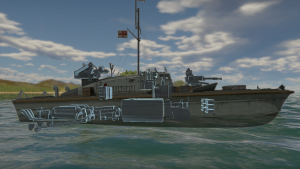 Any gun in the game will easily be able to penetrate anywhere on the boat, including the gunshields, at practically any range.

MGB-75 can be hull-broken by any gun with a diameter greater than 4 inches (102 mm). Hull-break triggers when a capable gun destroys any hull compartment or the bridge, resulting in instant destruction of the rest of the boat. At MGB-75's battle rating, the only guns capable of hull-breaking her are the 8cwt QF Mk I, found on Dark class (FPB 1101), and the 10.5 cm SK C/32, found on AF D3. The ability to be hull-broken by guns larger than 4 inches is a trait that applies to the vast majority of boats in tier 1 and 2, so in that respect, MGB-75 isn't better or worse than most other boats.

When moving forwards at high speeds, the bow will lift out of the water. This creates a blind spot in front of the boat where the 40 mm 2pdr QF Mk.IIc won't be able to depress far enough to engage surface targets.

In her primary armament group, MGB-75 has one 40 mm 2pdr QF Mk.IIc automatic cannon in a single mount, mounted centerline in front of the bridge. It has 1,400 rounds of ammunition available. The mount can traverse horizontally at a rate of 25°/s and vertically at a rate of 25°/s. The gun has a magazine capacity of 56 rounds and has a rate of fire of 200 rounds/min. With a stock crew, it can be reloaded in 7.8 seconds; with an aced crew, it can be reloaded in 6 seconds. Its maximum range against surface targets is roughly 3.1 km.

In her secondary armament group, MGB-75 has two 20 mm Oerlikon Mk.II in a twin mount, mounted centerline behind the bridge. It has 4,080 rounds of ammunition available, 2,040 per gun. The mount can traverse horizontally at a rate of 75°/s and vertically at a rate of 75°/s. Each gun has a magazine capacity of 60 rounds and has a stated rate of fire of 450 rounds/min, though in actuality, the gun on the gunner's left side fires at a faster around, 485 rounds/min. With a stock crew, the guns can be reloaded in 8 seconds; with an aced crew, they can be reloaded in 4 seconds. Their maximum range against surface targets is roughly 2.1 km.

In her anti-aircraft armament group, MGB-75 has four 7.72 mm Lewis machinegun 1916s in two twin mounts, one on either side of the bridge. For each mount, there are 1,940 rounds of ammunition available, 970 rounds per gun, for a total of 3,880 rounds. There are no stated horizontal or vertical traverse rates given in-game, but the mounts handle very similarly, if not exactly, like other twin and quadruple 7.72 mm Lewis machinegun 1916 mounts which can traverse horizontally at a rate of 75°/s and vertically at a rate of 75°/s. Each gun has a magazine capacity of 97 rounds and has a rate of fire of 550 rounds/min. With a stock crew, the guns can be reloaded in 18.2 seconds; with an aced crew, they can be reloaded in 14 seconds. Their maximum range against surface targets is roughly 1.6 km.

There are no choices available. Though not directly stated in-game, there is one tracer round every other round, so the guns most likely fire the standard default ammunition choice of the 7.72 mm Lewis machinegun 1916, which has the following composition: 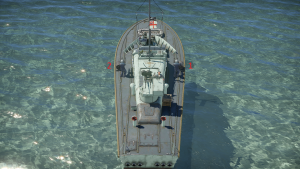 Mk.VII depth charges numbered 1-2 according to their drop order (click to expand).

MGB-75 can carry two Mk.VII depth charges mounted amidships, one on each side in front of the twin 7.72 mm Lewis machinegun 1916 mounts facing outwards. The depth charges are dropped one at a time in this order (see the image):

While the MGB-75's primary armament, the 40 mm 2pdr QF Mk.IIc, is a good weapon. It has a very good damage output, and, with a maximum range of roughly 3.1 km, it can outrange any opponent armed with 20 mm cannons. The gun can deal a lot of damage when the rounds hit; however, getting them to land may not always be the easiest task, mainly due to MGB-75's construction. MGB-75 has a relatively short hull, and she isn't particularly heavy for her size, so she is easily thrown around by rough waters. This, of course, makes accurately aiming the gun at long ranges practically impossible unless the sea is calm. In addition to this, MGB-75 has a planing hull, so the bow will lift out of the water when moving at high speeds. The 2pdr QF Mk.IIc can't depress far enough to compensate, so, when on the move, it won't actually be able to target most enemies in an area extending roughly 500 meters in front of the boat. Take care to either turn the hull or to slow down to engage enemies. Other shortcomings of the gun are its relatively long reload and that it's very easy to disable. For the former, if there are less than 20 or so rounds left in the magazine, it's best to fire off the remaining ammunition after each engagement to minimize the chance of needing to reload during the next engagement.

If the 2pdr QF Mk.IIc is knocked out or if it is reloading, switch to the secondary twin 20 mm Oerlikon Mk.V cannons. These guns have a shorter reload than the 40 mm, and they have a much faster traverse and elevation rates, so it tends to be better for close engagements. Since the default position of the mount is to face directly aft, it's best to have it targeting the enemy currently being engaged (default: X + 2) when not in use in order to have it already facing the enemy if it's needed. Of course, this also means that it won't be able to target any other boats or aircraft while the current target is still selected, so try not to be tunnel-visioned and always keep an eye on the surroundings. Aside from that, just like the 2pdr QF Mk.IIc, always be aware of how much ammunition is left in the magazines. If there are less than 40 rounds of so rounds left between the two guns, fire off the remaining ammunition to load a full magazine.

The fore 40 mm 2pdr QF Mk.IIc cannon can fire in ~143° to either side, centred forwards. As mentioned before, a blind spot is created when moving at high speeds which prevents the gun from firing in an area that extends ~500 ahead and which covers ~45° to either side. The aft twin 20 mm Oerlikon Mk.V cannons can fire in all directions except for a ~45° arc, centred forwards. When moving at high speeds, this blind arc is increased to ~75°.

For the 20 mm Oerlikon Mk.V cannons, the best ammunition choice is the 20 mm HE. There isn't much of a point in using the 20 mm AP belt because the primary armament is much more suited for engaging armoured targets anyway.

There is no practical reason to take them into battle, especially since, if they're not dropped, they essentially become unarmoured ammo racks.

By early 1941, many of the British Power Boat Company (BPB) 60-foot, 63-foot, and 70-foot boats had been completed and were in Royal Navy Coastal Forces service, and already, their weaknesses began to show. The boats were small and lightly constructed, and the living condition for the crew was cramped. Additionally, because of their underpowered engines, they were slow. While their low top speed was certainly acceptable for the anti-submarine work, as they were initially built to perform, it was insufficient by 1941 as most of the boats had been converted into motor gun boats by this point. Thus, in 1941, BPB began designing a larger, faster boat.

BPB's new design had a length of 71 feet 9 inches (21.9 m), a beam of 20 feet 7 inches (6.3 m), and a draught of about 4 feet 3 inches (1.3 m). It was powered by three Packard petrol engines driving three shafts which allowed it to achieve a top speed of 42 knots. The BPB 71'9" boats formed the bulk of Coastal Forces' MGB fleet until the introduction of the larger and more heavily-armed Fairmile D boats. In total, 96 boats were built:

MGB-75 was part of the original order placed in November 1940. She was ordered as a motor anti-submarine boat but was completed on 8th May 1942 as a motor gun boat. MGB-75 was commanded by the following: