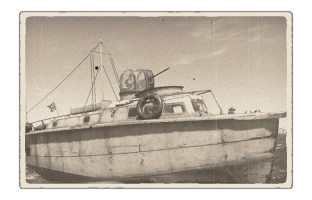 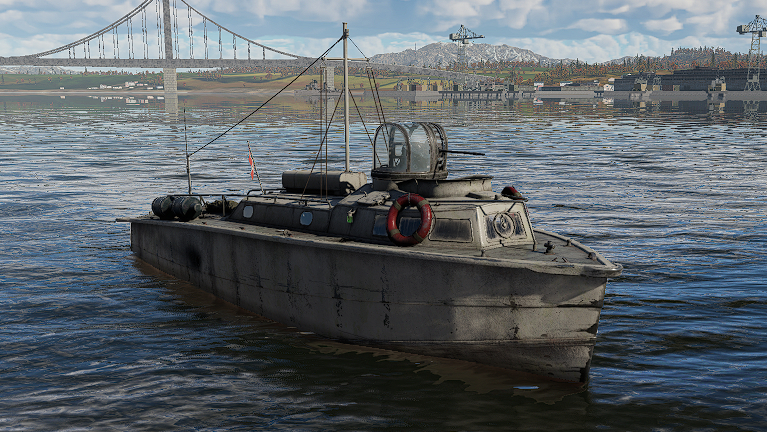 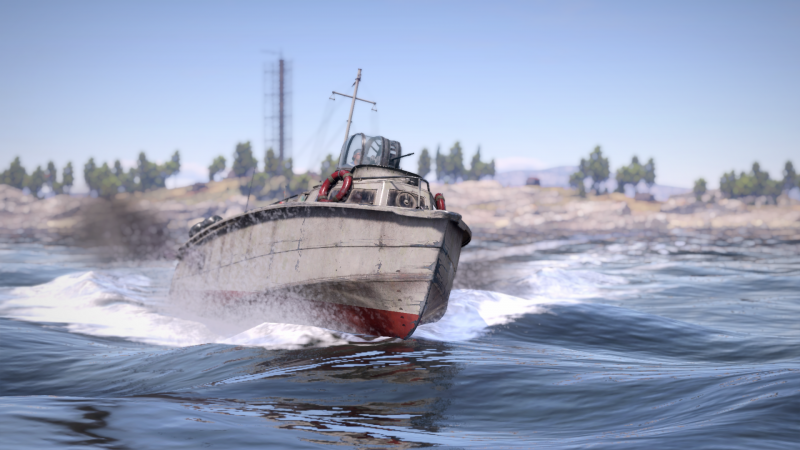 The LS 3 is a rank I German motor torpedo boat with a battle rating of 1.0 (AB/RB/SB). It was introduced in Update 1.79 "Project X" as part of the fleet closed beta test.

The LS 3 has no armour to speak of, any shell will piece the hull like a knife through the butter. However, the boat's interior is quite spaced and despite the crew of 7 is all located at the front, the bridge can soak a good amount of frontal damage and protect the crew and modules from machine gun-calibre rounds (that is very common in its BR). With an ace crew, it can still remain afloat even with only 3 crews left.

Still, the paper-thin armour of the LS 3 made it incredibly vulnerable against larger calibre rounds that only an nearby blast from these big guns can deal a serious damage or even knock out the ship in one shot.

The 15 mm MG 151 is the same gun found on the rank IV VS-10 and it is one of the deadliest weapon in the game. It has an insane fire rate of 750 rounds per minute, which means it can take small boats and aircraft at its BR in seconds. On top of that, the 15 mm gun is loaded with an impressive API shell that can penetrate up to 33 mm at point blank and 17 mm at optimal range (~1,750 m) and is capable of setting fire when scoring a hit, and HEF shell that can deal a good amount of damage against lightly armoured ship and aircraft, as well as gun being mounted on a 360° turret with no blind spot. This made the tiny LS 3 capable to put up a good fight against enemy boats from much higher BR with an exception of armoured boats and barges

Like the AN/M2 MG, this gun has large belt capacity of 600 rounds, and long reloading time. However, this cannon overheats easily, and it has very limited overall ammo stock of 1,200 rounds, so trigger discipline is a key to effectively use this weapon.

The LS 3 can carry two 450 mm torpedoes, housed inside the vessel. These torpedoes are highly adequate against any large, slow vessels the LS 3 might face at its BR. However, the torpedoes are extremely short-ranged when stock, with a range of just two kilometres. Their speed of 74 km/h is also relatively average for a torpedo of its size. The "Torpedo Mode" modification should be considered as it increases the range to six kilometres at the cost of speed; this will allow the LS 3's torpedoes to hit far-away targets. With a decent 250 kg warhead, the torpedoes will be able to destroy most destroyer-sized vessels with a single hit.

The LS 3 is arguably the best overall reserve unit in-game. While it only possesses a single 15 mm cannon it is also one of the best weapons in-game (as it was the same gun mounted on the rank IV VS-10) mounted high on a full 360° rotation turret with a gracious 90° elevation and whopping 30° depression with no blind spots or dead zone. In short, the gun has better coverage than 2, or even 3 guns on other boats, and the bonus is the best AP round of its class. Combine its high top speed, two 450 mm torpedoes, and artillery strike call it is capable of hitting well above its BR.

Success in-game is using the MG 151 correctly. Trigger discipline is absolutely necessary as the gun can overheat very fast and ruin your sortie right there; use 1/2 second bursts unless point blank kill strike. As the MG heats up its precision falls. Up to 1/4 hot is pin point, as it gets 1/2 hot round the rounds start spreading and over that you can see rounds fly everywhere. Range wise one can hit targets at 1,750 m with cold barrel and deal a considerable damage. Best is to be less than 800 m were the accuracy and power rip your targets apart.

While default Universal ammo is perfectly fine, the API-T belt is 25% better against most naval targets you will face (only swaps one HEF for API-T) , while the HEIT belt is very deadly against air targets and some paper-thin targets, but had somewhat less potental against naval targets at range. You will be paying for reloads often, so best is to always have Default as one of your game loads and API-T as other in case you forgot to restock ammo. Again, keep the MG cool, short bursts unless point blank.

What it lacks in the protection area it makes up in mobility. The LS 3 is second to only the G-5 in terms of speed. This in tandem with its incredibly tight turning circle and slim profile, makes the LS 3 very well suited for cover hopping and flanking capture points. Use its speed to sneak in to capture points and rush at vessels not paying attention. Its high top speed also makes it useful to rush cap points at the beginning of a match. That being said, be careful not to overextend, or you will find yourself overwhelmed very quickly. Instead, use its superior speed to be the first to reach a capture point then hide behind an island, selectively engaging enemies that come into the line of sight.

Don't forget your smoke and artillery! Both are incredibly useful to prevent enemies from hitting you. Although a really small target, large cannon (50 mm+) ships have a good chance at hitting you well outside your guns range. Significant threats are the Japanese dual 40 mm Type 91 AA and Bofors 40 mm, and at closer range a battery of 20 mm cannons, like on a PC-451 or S-100. The sides of the LS are the most vulnerable, so facing directly at the enemy as much as possible.

At the time the desired engines (Daimer-Benz Maybachs) were not available thus forced to used less powerful Jumo 205 Diesels, and neither were the torpedoes. Instead of torpedo boats they became minelayers, and combined with other issues resulted in disappointing performance and the idea was put on hold at start of war in Europe.

The next year the idea was revisited, this time Dornier's all metal boat was chosen, Daimler-Benz MB 507 light Diesel engines and so were 45 cm torpedoes. In addition a new 15 mm MG 151 cannon was installed in a turret on the roof. Two were built, the LS 3 (delivered on October 10th, 1940) and LS 4. There is a deviation from historical and game at this point, as the records indicate the LS 3 carried 4 mines, not torpedoes, and the LS 4 would also have 15 mm cannon, not 20 mm (but the MG 151 was interchangeable, so would be easy to upgrade to 20 mm MG151/20).