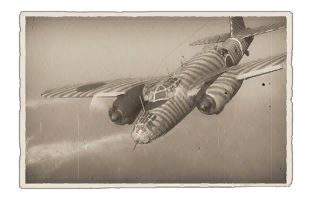 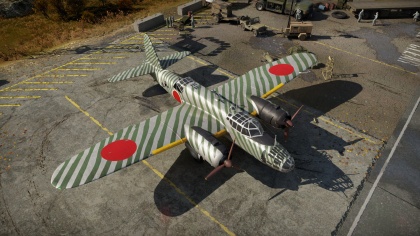 The Ki-49-IIa Donryu is a rank II Japanese medium bomber with a battle rating of 3.7 (AB/SB) and 3.3 (RB). This bomber has been in the game since the start of the Open Beta Test prior to Update 1.27.

The Ki-49's role is a low-altitude medium bomber capable of destroying ground targets such as pillboxes and tanks. Although hindered by a low total bomb capacity, this aircraft is renowned for its impressive manoeuvrability. This being said, it is very easy for the Ki-49 to hover above an area and drop all of its payloads rather quickly. Heavy bombers such as the G8N1 Renzan have a harder time due to their sheer size and slow rate of turn. Make sure to select either of the 4 x 250 kg bomb load outs if attacking targets like tanks, pillboxes, or smaller ships.

The Ki-49-IIa can be outfitted with the following ordinance:

This aircraft has the ability to hold up to 1000 kg of bombs in several different variations. 12 x 50 kg bombs, 4 x 250 kg bombs and 1 x 500 kg bomb. Use the 12 x 50 kg bombs to attack light tanks and light pillboxes. They are not viable against bigger targets since direct hits are needed to destroy. This loadout is particularly useful on maps like Zhengzhou where there is an abundance on non-moving targets (light pillboxes). Use the 4 x 250 kg bomb versions to destroy heavier targets such as medium tanks, pillboxes, destroyers, and cargo ships or mini bases. Use the 500 kg bomb to destroy targets like carriers.

In arcade battles, this aircraft is particularly proficient at bombing bases, especially with a maxed reload crew skill. Since you can virtually turn on a dime, instead of having to line up longer bombing runs like heavy bombers you can "hover" over the base or airfield and attempt dive attacks. The 500 kg bomb is useful here because you only have to drop one bomb instead of spamming multiple. It's also possible to use this same tactic against pillboxes or tanks. With fighter cover, a good reload time skill and good aim it's possible to destroy dozens of ground units.

If attacked by fighters, it is important to remember and recognize the Ki-49's turning capabilities. It is actually possible to win lateral turn fights against fighters with this aircraft. Try not to act like a "sitting duck" because the Ki-49 features little armour protection and has limited defensive capabilities as far as weapons go. If found in a sticky situation, the hard-hitting 20 mm dorsal cannon is deadly. The only problem is that it's not located directly on the tail. If an enemy is directly behind or below the Ki-49, the 20 mm tail gunner's arc will not reach it. Therefore, you may need to change altitude in order to have the enemy plane both above and behind you. Pulling hard manoeuvres will throw the enemy off and allow you to set up for more defensive fire.

Although unconventional, this aircraft is a fantastic weapon if you want to bait the enemy. Ideally, you would want to attract a higher flying enemy down to you and to get into a turn fight. This way, depending on the enemy aircraft you can outmanoeuvre and distract him while teammates fly down to finish him off. Also if the enemy aircraft attacks from above, the 20 mm Ho-1 cannon can do a lot of damage.

Being a bomber, speed is not necessarily an important attribute, however, payload and armament are. Upgrading the bombs allows for more target flexibility and damage potential while turret upgrades will help survivability. the turret belts and the "new turrets" upgrades are useful. The "new turrets" upgrade will allow you to fire the turrets for longer periods of time and having access to multiple ammunition belts is also helpful. The engine upgrades are also useful in that they will help you reach your target faster and will control engine temperature. Having all of the weapons upgrades will help drastically in unlocking the other modules on this aircraft.

The best way of grinding with this aircraft is to play cautiously and to use communication. As with any bomber, if you're caught alone or off guard you are as good as dead. Although not a sure tactic, having a fighter escort will boost RP gains drastically. This goes for both arcade and realistic battles. Generally, try to destroy as many targets as possible without wasting bombs. If done in a speedy fashion it is possible to drop multiple payloads in RB. The same goes for simulator battles. In arcade battles, having a high reload speed and a fighter escort will allow for constant bombardment. If done correctly, flying the Ki-49 in all modes will net you large amounts of RP.

In the spring of 1942, it was decided that the Ki-49 should be fitted with new engines, the Nakajima Ha-109 radial piston engines, rated at 1450 hp. This required only a slight modification of the engine nacelles, as the new engine was a similar size to that of its predecessor.

However, the oil cooler could not fit inside the nacelle along with the engine and was put outside, instead. Other changes were made to improve combat conditions: the armor protecting the airplane's crew was upgraded and self-sealing fuel tanks were installed, as well as a new bomb sight.