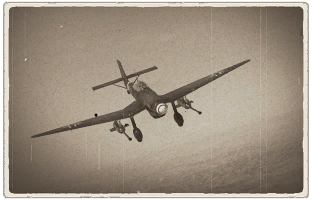 Like other ground attack aircraft, the Ju 87 G is heavily armoured, tarnishing its flight characteristics. However, with enough speed, the Ju 87 G can turn on a dime. This is the case with all Ju 87 variants. Once that speed is gone, however, the Ju 87 turns painfully slowly. Mitigate this by using dive attacks to gain altitude. At higher altitudes, the Ju 87 G can be a fighter's nightmare. With enough speed and energy, a Ju 87 can outmanoeuvre most fighters. A Ju 87 G pilot's best chances of surviving an encounter are a good aim, teamwork, and speed. Boom & Zooming 10 meters above the ground will make the Ju 87 G a very easy target, so one must stay at higher altitudes if they wish to survive a dogfight.

This plane is mainly used for killing tanks. When hunting tanks, equip armour piercing shell rack and do not lead your shots. Aim straight at the front end of the tank and it should hit. When hunting for bombers, only engage if they are lower and you and not heavily armed like the B-17s. It is important to note that this aircraft is an easy target for fighters and so it is recommended to stick close to allies and stay around them for a while until the bandit numbers have thinned out. When you feel you are safe from any harassment then only engage the ground units. You may engage ground units if you have cover or you feel that bandits are already engaged. You have limited ammo so make it count! This is a fun aircraft to fly and should give you practice to flying the Hs 129.

Skins and camouflages for the Ju 87G from live.warthunder