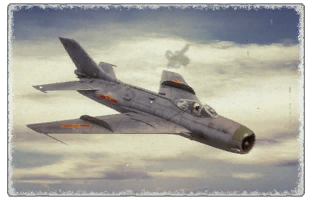 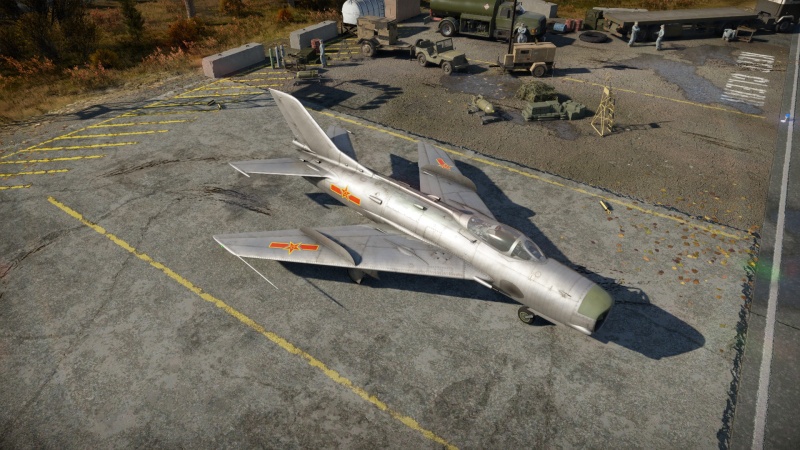 Largely identical to the Soviet MiG-19PT, the J-6A is the first supersonic PLAAF jet available in the Chinese tech tree and has much to offer; radar, air-to-air missiles, and powerful guns in addition to high speed and acceleration. The only physical difference between it and the MiG-19PT is the relocated braking parachute, which is now placed at a bulge on the base of the rudder instead of underneath the engines.

Compared to the F-100A, its Taiwanese counterpart across the strait, the J-6A flies much better but has inferior suspended weapons. The J-6A's meagre selection of small bombs and rockets may be disappointing in combined battles. Still, pilots who practice with this plane or are used to its Soviet version can pose a major threat to enemy fighters. Despite having a lower top speed than many of the aircraft it encounters, the J-6A's excellent acceleration and relatively good manoeuvrability let it punch above its weight when flown carefully.

The recommended belts for this aircraft are "Armoured targets", they're more reliable than the "Air targets" belt and tend to take off wings and large sections, and destroy engines with one hit, in comparison to the "Air targets" belts which tend to spark or just damage external modules. The ground belts contain APHE rounds with 60 mm of penetration, but it is not really worth going for ground targets as the limited ammunition and high speed of the aircraft makes it very difficult to hit or kill anything.

The J-6A can be equipped with PL-2 missiles, licensed copies of the Soviet R-3S with identical performance.

The J-6A, aka Dongfeng 102 (东风102) or Type 59 Interceptor (59式歼击机), was intended as an equivalent of the MiG-19P and first flew in 1958. Quality control issues, resulting from the limited experience of the Chinese manufacturing industry at the time, meant that the performance of the aircraft was inferior to the original. The aircraft was rejected by the PLAAF and production was limited. In the mid 1970s, production was restarted with new jigs from the Soviet Union. These new aircraft were of an acceptable standard and entered PLAAF service in extensive numbers.

A large number of variants and prototypes were made, though their designations and designs are muddied and difficult to research. The "J-6B" variant was a copy of the Soviet MiG-19PM interceptor model, which lacked cannon armament and was armed solely with beam riding air-to-air missiles, though its performance was unsatisfactory like the early J-6A and only a small number were produced. Several models were designed after the MiG-19S and a handful entered serial production. Later variants relocated the braking parachute to the base of the rudder. Various prototypes experimented with MiG-21 style shock cones. Reconnaissance and two-seat trainer variants were also manufactured, the latter being notable since the Soviet Union did not manufacture any MiG-19 trainer variants. One trainer airframe, known as BW-1 (变稳-1) was used to test the fly-by-wire system of the JH-7 fighter-bomber.

During its 4-decade-long service life since 1962, J-6 served as the cornerstone of PLAAF and scored quite a few victories over ROCAF and USAF/USN; the J-6 was also exported to several nations under the "F-6" designation and participated in several conflicts. The F-6 was operated by Pakistan in the 1971 war with India (with some victories over the IAF), by Vietnam in the Vietnam War (alongside the original MiG-19), and curiously enough by both Iran and Iraq during the Iran-Iraq War. In these conflicts the F-6 was often relegated to air-to-ground missions since its speed and avionics were inadequate, though it was capable of dispatching subsonic aircraft and could outmanoeuvre faster jets in a dogfight.