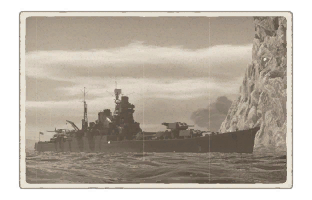 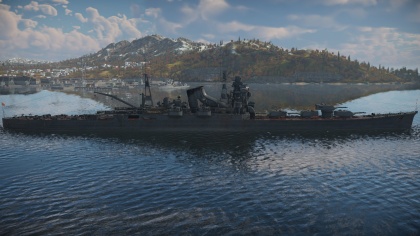 The IJN Tone (1945) is a rank V Japanese heavy cruiser with a battle rating of 5.7 (AB/RB/SB). It was introduced in Update "Starfighters".

The IJN Tone is capable of carrying 24 Long Lance torpedoes in 4 sets of 3, 2 per side. Each torpedo tube has an onboard quick reload, so 12 torpedoes can be launched per side before needing to reload in a capture zone or port. One notable characteristic about the torpedo launchers is that the aft sets have better forward-firing angles than the fore sets, but the forward angles still aren't particularly incredible. However, all the sets have good rearward firing angles.

As the torpedoes are Long Lances, they can detonate if they are hit and will destroy the IJN Tone nearly 100% of the time. Essentially they are completely unarmored ammunition racks. Conversely, if an enemy ship is hit with a Long Lance, there is a high likelihood of destroying it outright or sinking it via flooding.

The IJN Tone was the lead ship of the Tone class of two heavy cruisers built for the Japanese navy. Designed as a scout cruiser to operate within large task forces, the ship was built with a unique armament scheme and a large rear deck for carrying seaplanes. Completed in 1938, she saw extensive service during the Second World war and served in many major battles including the Battles of Midway, Santa Cruz and Leyte. Relegated to training duties by early 1945, she was sunk by American naval aircraft in July of that year, and was later raised and scrapped.[1]

Tone, along with her sister ship Chikuma, were designed as a pair of heavy scout cruisers to provide long-range reconnaissance services to the Japanese carrier fleet. Due to the Japanese doctrine of not carrying reconnaissance aircraft on their carriers, the Tone carried six Aichi E13A reconnaisance floatplanes on a huge spacious rear-deck. Thus, the ship featured an unconventional main armament configuration - four twin 8-inch (203 mm) turrets all located forward of the superstructure.[1] She also carried numerous anti-aircraft defences and four triple 610 mm torpedo launchers located at the sides. She displaced 11 500 tons, and could make 35 knots (65 km/h).[1]

The Tone was present during the attack on Pearl Harbour in December of 1941, and launched her reconnaissance aircraft in support of the raid. She later participated in the Battle of Midway, where her floatplanes helped discover the inbound American carrier group. Later on, she participated in the Battle of the Solomon Islands, and the battle of Santa Cruz. During the latter engagement, the Tone played a major role in delivering supplies to the troops at Guadalcanal, and performing scouting duties for the Carrier task force.[1]

Tone then returned to the Japanese port of Kure to receive additional anti-aircraft guns. She served a short stint as a commerce raider in the Indian ocean, but was then reassigned to the Japanese carrier group as a scout and escort for the Battle of the Philippine Sea. At the battle of Leyte Gulf, Tone provided her floatplane scouting duties as required; she survived with minor damage while her sister ship Chikuma was sunk.[1] At that point, she retired to the Japanese home islands, where she would stay for the remainder of the war. On July 24th 1945, Tone was attacked by USN aircraft; hit by nine bombs, she settled onto the seabed. She was stricken from the navy list, and subsequently raised and scrapped after the end of the war.[1]