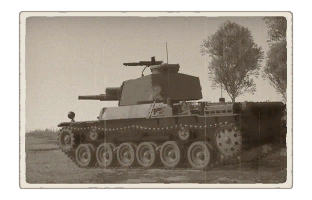 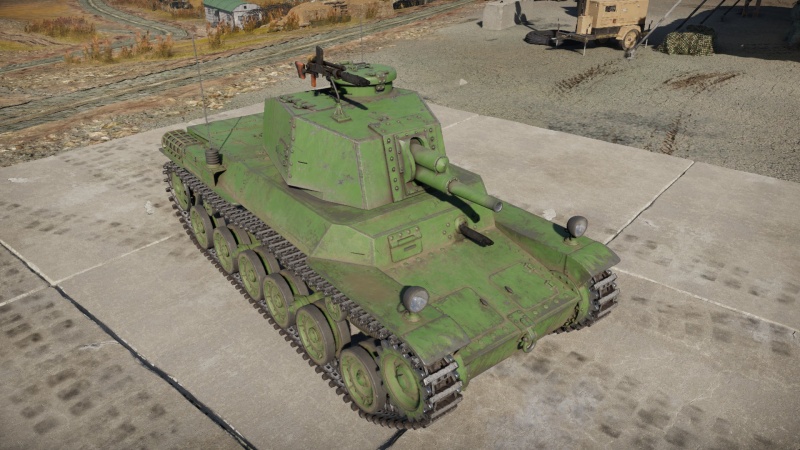 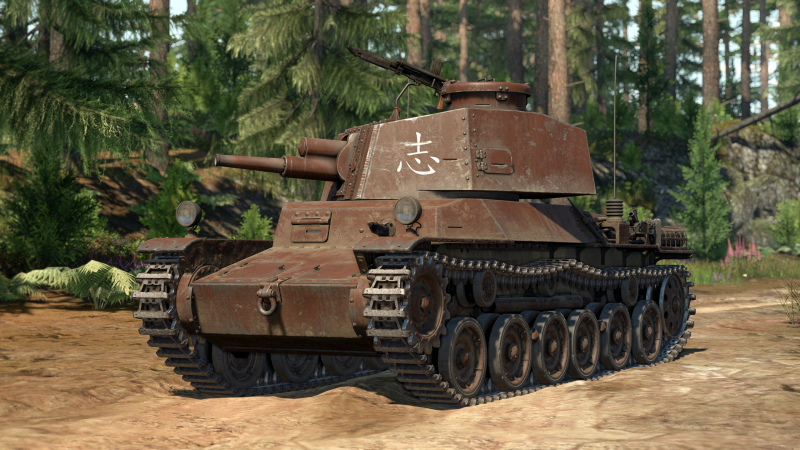 The Type 2 Ho-I is a rank I Japanese medium tank with a battle rating of 2.3 (AB) and 2.0 (RB/SB). It was introduced with the rest of the Japanese ground forces tree with Update 1.65 "Way of the Samurai".

The general configuration and proportions of the Ho-I are largely similar to the Chi-Ha Kai. The most apparent differences are the angular, welded hull and turret, which will become a familiar sight for the rest of the Japanese medium tanks in Rank II and III. The protection is improved significantly, no longer having the paper-thin armour plaguing previous tanks, but it is still nothing to boast about. Closer inspection reveals a larger, stubby 75 mm gun that is trickier to use than the reliable 47 mm gun on the Chi-Ha Kai but is fully capable of penetrating most tanks it will face. Overall, the Ho-I is comparable to the Pz.IV E, a balanced medium tank with a short 75 mm gun.

The armour on the Ho-I, while being an upgrade over the Chi-Ha (50 mm at the turret and hull front, compared to 25 mm), still leaves much to be desired. Most contemporary tank guns can penetrate the flatter surfaces and the side armour is not even completely proof to heavy machine guns. The internal modules aren't the most resilient, as the turret is rather cramped, stuffed with ammunition, the rather small cannon breech, and 3 crew members. A single APHE shell will almost invariably kill all the turret crew.

Ammo racks of the Ho-I

While it has the classic bow-mounted Type 97 machine gun featured by Japanese wartime tanks, the Ho-I also features another Type 97 on a pintle mount. The Type 97 is disappointing by rifle-calibre machine gun standards, having a very small magazine and a relatively low rate of fire. While this is not a big drawback when fighting other tanks, it makes mowing down open-topped SPAAs, fending off aircraft, and spotting enemies on the minimap more difficult. Having two of them compensates slightly for these flaws.

The Ho-I should generally be played as a support tank. While its mobility is good, its gun packs a punch, and its armour is halfway decent, the poor ballistics of its shells and the substandard gun handling are a considerable liability at its rank, where speedy light tanks are common. A missed shot at closer distances against a Stuart or BT tank could have unfortunate consequences, allowing them to flank or put a round into the Ho-I's weak spots. Conversely, it should go without saying that the Ho-I makes for a poor sniper, so staying in back of the map and providing covering fire is unlikely to be productive. For those not very familiar with the tank, it is best to stay just behind advancing teammates and allow them to attract attention; this provides extra time to line up shots and avoids sudden surprises. When missing shots is less of a concern (e.g. against slow targets or in close quarters), the great firepower can be brought to bear.

The Ho-I has a sizeable arsenal of shell types. The stock Type 95 APHE round is quite underwhelming, having a bit less penetration than the Ke-Ni reserve tank's gun. The larger calibre provides some overmatch effect, but in general it is not a reliable weapon against anything more heavily armoured than a reserve tank. The M3A1 Stuart's turret is immune to the round and the hull has a decent chance of shrugging off the shot at a slight distance! On the bright side, it contains an enormous 460 g of TNT filler, so any target that the shell manages to penetrate will be annihilated in short order. The Type 94 HE round has 12 mm of penetration and is of little value, though it may be useful for destroying lightly armoured vehicles with overpressure effect. The unlockable Type 2 HEAT round has 90 mm of penetration at any distance. This is enough to go through the frontal armour of nearly all tanks at its rank, though the post-penetration damage can be punctual and it has the worst ballistics of any shell type available to the Ho-I. Try to aim for critical crew members or ammo racks. Lastly, the Type 90 smoke shell is available. While smoke is always nice to have, especially at lower ranks where fewer tanks have smoke grenades or shells, it is especially useful for tanks with low-velocity guns like the Ho-I. In a support role, smoke shells can be used to hide teammates and the user from view when driving in the open or capturing objectives, but they can also be used offensively by blinding entrenched targets. This makes it easier for the Ho-I to advance safely and get into firing range. If the enemies decide to leave the smoke cloud, they will be noticeable to the Ho-I slightly before their own vision clears up, providing time for a careful shot.

Experience gained with the Ho-I can be applied to some extent to the later Chi-He, Chi-Nu, and Chi-Nu II, as they all use the same chassis. Out of these tanks, the Ho-I is the only model that has to deal with a low-velocity gun, but it currently has the lowest battle rating and the armour holds up the best as a result.