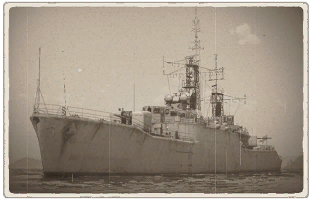 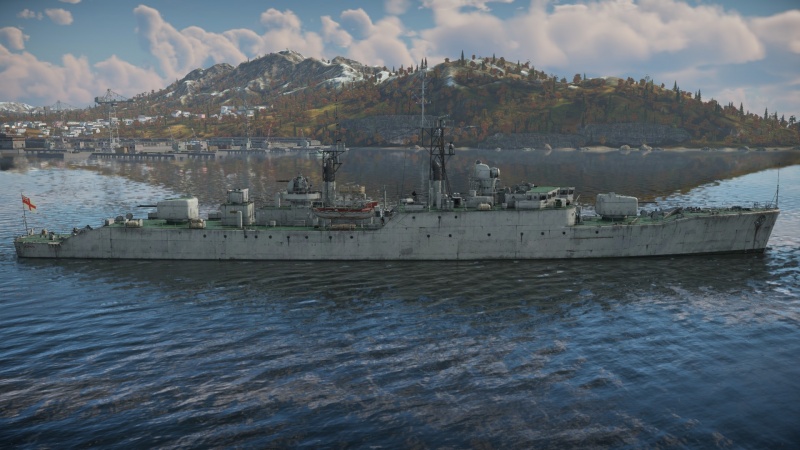 The Leopard-class, HMS Leopard (F14) is a rank V British frigate with a battle rating of 4.0 (AB/RB/SB). It was introduced in Update "Red Skies".

HMS Leopard was the lead ship of the Type 41 anti-air frigates. The concept of this frigate began in 1944 when the Royal Navy sought a new anti-submarine frigate. Original requirements asked for a mass-producible frigate with enough speed (around 25 knots) to chase surfaced U-boats and sufficient main gun firepower to engage them[1].

By 1945, the design concept witnessed significant changes due to the new threats and additional requirements. The new U-boat, Type XXI, could reach 15-18 kn submerged for an extended period, leaving the existing frigates (their speed was no more than 20 kn) or other escorts obsolete. Furthermore, the new enemy, the Soviet Union, who had paid a lot of attention to submarine warfare, would inevitably develop fast submarines. On the other hand, the Director of Anti-Submarine Warfare suggested to implement alternative Anti-Submarine Warfare (ASW) and Anti-Aircraft Warfare (AAW) armaments on the same hull as the previous 'Loch' and 'Bay' classes. The AAW type could provide air defense for the convoy and assist anti-submarine missions with a basic anti-submarine weapon such as depth charges. Besides, an Aircraft Direction (AD) type was added to guide land-based aircraft and provide early air warning for the convoy[2].

Further design modifications were included in the post-war era. In 1946, the British observed the Bikini nuclear test, demonstrating that the open deck seemed vulnerable against the atomic explosion. Thus, the new frigate design featured an enclosed bridge with minimized altitude and integrated all operations rooms (compass deck, radar room, etc.) within the enclosed structure. Debates on powerplant of different variants continued into the late 1940s. Finally, in 1947, it was decided that the AAW and AD types would use diesel machinery to achieve an endurance of 4,500 miles at 15 kn[3], while the ASW type would be equipped with new steam turbines to reach 27 kn for hunting down the Soviet equivalent of the Type XXI. In 1948, one AAW prototype (Leopard) and one AD prototype (Salisbury) were ordered, and the final design was approved by the Board in 1950[4]. This series of ships were marked as the 1951 Frigate Programme with Type 12 as ASW version, Type 41 as AAW type, and Type 61 as AD variant.

The AAW type shares the same all-welded[5] hull (340ft length, 40ft beam, 16ft draught) and machinery (8 Admiralty Standard Range diesel engines) as the AD type and differs in armament and equipment. Type 41 mounted two twin 4.5-inch dual-purpose guns, while Type 61 has only one mount. Both ships are equipped with completed radar systems, including Type 275 anti-air fire control and Type 960 air-warning radar. Compared to Type 61, Type 41 also mounted Type 262 close range anti-air control system and the Type 992Q surface/low-level search system for engaging aircraft[6]. That extra equipment and firepower caused the Type 41 to displace 1,835 tons, about a hundred tons heavier than Type 61 (1738 tons) [7]. The early number requirement for Type 41 was 11 in 1953, but eventually, only four ships were produced for the Royal Navy.

HMS Leopard was laid down at Portsmouth dockyard on 25 March 1953 and was launched on 23 May 1955[8]. She and her sister ships formed the 7th Frigate Squadron to show the flag at the South American station during peacetime. On 29 July 1963, Leopard was involved in a collision with South African minesweeper Pietermaritzburg during training exercise Capex 63, sending the ship back to Portsmouth for repairs[9]. Between October 1964 and February 1966, Leopard received a major refit to install new Type 965 and Type 993 radars with other ECM and ECCM equipment. In 1973, Leopard was deployed to support European trawlers in Britain's fishing dispute (or second 'Cod War') with Iceland. She was involved in a close confrontation with patrol ship Ægir but did not open fire. She also conducted another patrol in supporting British trawlers during a fishing dispute in 1975.

In the 1970s, the lack of missile armament made the Type 41 frigate obsolescent in modern warfare. However, a large-scale modernization of weapons was impracticable for economic reasons, as well as the ships' deteriorating condition[5]. Therefore, these frigates were either retired or sold to other countries in the late 1970s. In 1977, Leopard was sold for scrap at Dartford[7].