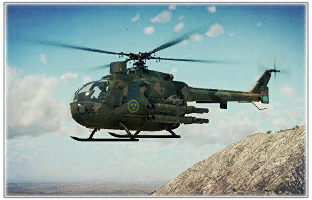 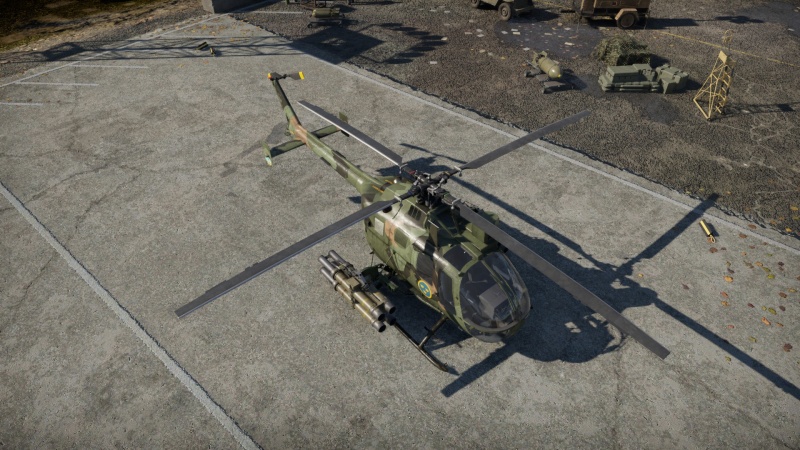 The HKP9A is a rank VI Swedish utility helicopter with a battle rating of 9.7 (AB/SB) and 9.3 (RB). It was introduced in Update "Wind of Change".

The HKP9A is a light utility helicopter operated by the Swedish army. Although different in designation, the helicopter is identical in flight performance to the German BO 105 CB-2, only being differentiated in loadout options. This family of helicopters are some of the most agile in game, able to perform most advanced manoeuvres without sacrificing a lot of altitude. All control surfaces are incredible responsive and quickly react to any input a pilot throws at it. This can often allow pilots to be much more aggressive when facing gunfire, as the helicopter can change directions almost immediately. On top of this, the HKP9A is one of the smallest helicopters in the game, making it difficult to both spot and shoot down. It is this small profile that allows the helicopter to manoeuvre with ease, as it is very lightweight. A consequence, however, of this weight saving, is the lacklustre engine power that despite its size makes the HKP9A slow in both top speed and climb rate. Although not detrimental to its general combat effectiveness, it can be a noticeable downside especially when avoiding incoming aircraft, or trying to gain altitude over mountains.

As the HKP9A is a light utility helicopter, the vehicle lacks any form of protection against small arms fire. The helicopter has directly exposed pilots at the front, and a fuel tank stretching the entire underside of the vehicle. This makes it so that a lot of hits from below sets the helicopter ablaze, while most hits from the front knocks out both crew members. This makes the flak jacket modification a vital component for protection as it can allow the crew to survive longer in battle. The engine is also prone to catching fire, and the lack of significant thrust makes the loss of one of the two powerplants enough to take it down.

The HKP9A can be outfitted with the following ordnance:

The eight TOW missiles is the most ideal loadout for the HKP9A as it allows for a lot of stopping power against ground vehicles. Having this amount of missiles is fantastic, especially for its class, where four or six missiles is usually the average. Despite this quantity, the general flight performance stays almost identical, still allowing for aggressive manoeuvring.

A researchable modification on the HKP9A is the installation of 12.7 mm gunpods fixed against the fuselage. This weapon type can be carried one on each side or in combination with the TOW launcher. Although this weapon type limits the quantity of missiles the helicopter is able to carry, it gives the HKP9A some form of self-defense against flying targets, as it lacks any sort of air-to-air capabilities otherwise. It can be worthwhile for a player to carry a combination of missiles and guns if they expect to face off against other helicopters.

As this helicopter is incredibly light with a lot of firepower for its class, the general playstyle should be one of risk-reward. The HKP9A can be played effectively in both long range and close range territory, depending on what a pilot prefers. Both playstyles can be equally effective employed correctly but have their own drawbacks.

As the HKP9A carries missiles with almost 4 kilometres of firing range, staying out of sight from close range SPAA is one way to approach the helicopter. A pilot can in this case decide to utilize cover around the map, hiding behind buildings and mountains peeking out of cover to fire on stationary targets. This playstyle is most optimal when the enemy has a lot of SPAA active. Most of these players will be stationary in their spawn point looking for enemy helicopters, which the HKP9A can take full advantage of.

As a downside to this playstyle, the HKP9A is very vulnerable to incoming aircraft, as the helicopter has to operate entirely by itself. Being situated in a high battle rating without any strong defensive weaponry makes it a perfect prey for enemy pilots. The playstyle also limits the offensive capabilities of the HKP9A as the missiles are much slower than their Soviet counterparts. This means that moving targets can escape into cover before the missile impacts, resulting in wasted time. On top of this, the helicopter requires visual contact with the enemy while firing, sometimes requiring upwards of 20 seconds spent outside of cover.

Almost opposite to the defensive one, the HKP9A can counteract the slow guidance speed and weak air-to-air protection by playing inside the map boundaries. This allows the HKP9A to take advantage of allied SPAA units using them as cover, allowing a player to spend more time focusing on ground targets instead. On top of this, the closer distance between the helicopter and target allows for less time where the enemy can retaliate. The slow travel speed of the TOW missiles will instead work in a player's favour as it allows for better accuracy when guiding.

This way of fighting requires a bit of map knowledge and spatial awareness as enemies can spawn in their own SPAA to retaliate almost immediately. On top of this, a closer proximity puts the HKP9A in range of roof-mounted machine guns, which are heavily prominent at this battle-rating. Although you can hide behind cover or stay directly above a target to counter it, this only works in the short term as the longer you stay alive the more people will become aware of your presence, putting more and more emphasis on staying out of sight.