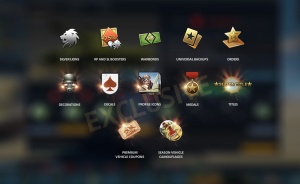 Each Battle Pass season lasts a minimum of 13 weeks. The level lineup is endless and after receiving all exclusive awards you can continue to participate in the “Battle Pass” season and receive new awards.

Seasons have exclusive awards and their duration can be adjusted to suit other game events.

There are 14 tasks available in one single season. They are not immediately available: