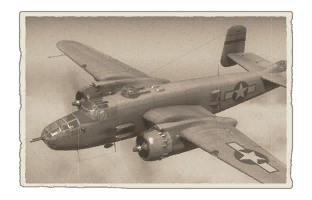 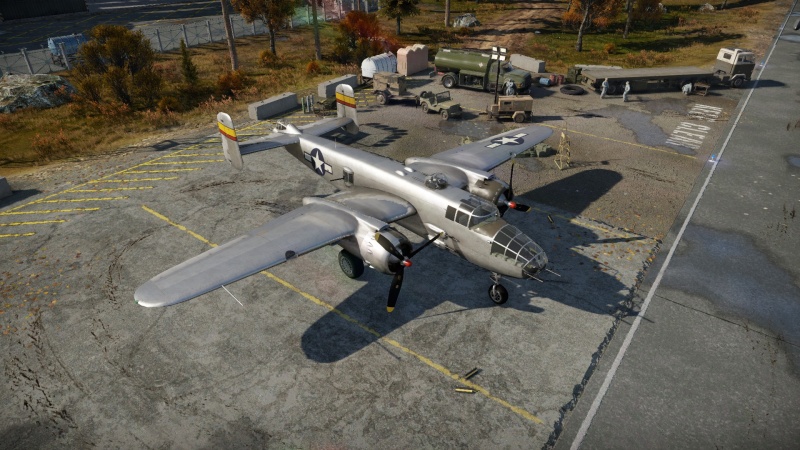 As later models moved from the dedicated bomber position and morphed into more of an attacker role, bomb payloads were reduced to allow for more armour around the cockpit and more offensive weapons and ammunition to fill the attacker mode it took on, especially under the command of U.S. Marine Corps squadrons. With more than 10,000 B-25 aircraft variants built, they saw action in all theatres of war and were even subject to part of the lend-lease program which China and the USSR benefitted from. So versatile was this aircraft that a flight of them were specifically outfitted and their crews trained to take off from an aircraft carrier and bomb mainland Japan in a daring raid. This historical mission was called the "Doolittle Raid". Impressive for an aircraft not meant to take off from an aircraft carrier. 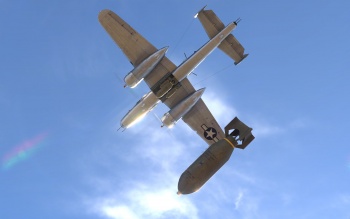 B-25J-1 releasing its bombs over a target.

Rugged, sturdy, though, the B-25 is all of those things. Featuring crew armour protection that outclasses the B-17 Flying Fortress in a handier, smaller design, the Mitchell is a tough nut to crack and even harder to devoid of the crew. Calibres above 20 mm are a must for a quick kill, otherwise, the B-25 will repay in kind. Forgoing all defence is good, but all offence, too? It is called overkill, of the pursuit fighter.

The two Wright R-2600 air-cooled radial engines are themself hard to destroy and with dropped payload, the Mitchell will just keep flying on a single damaged one. Denying under armed fighters the ability to lethally cripple it. Yet this aircraft has got one downside: fuel tanks. While present in all planes, the armour, crew and bomb bay take up all the fuselage. Leaving only space in the wings. A common cause of a crash of a B-25 is hence a fire and thus a structural failure of the wing spar. 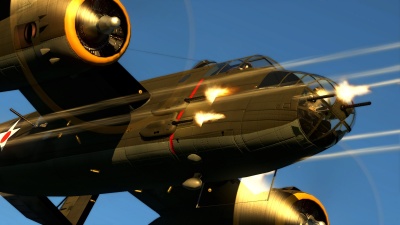 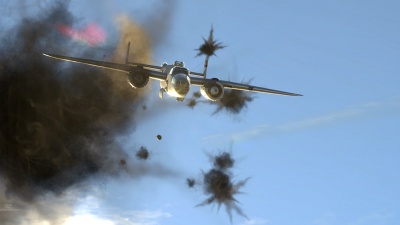 The B-25J-1 can be outfitted with the following ordnance: 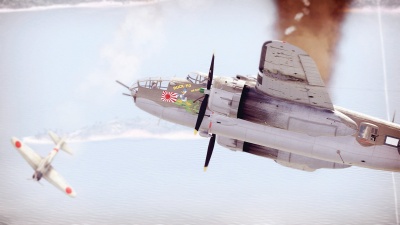 B-25J-1 tangling with a Japanese fighter over enemy territory.

In Realistic battles (and Arcade to an extent), it is highly recommended against exclusively bombing strategic bases and in general to not bomb from high altitudes. It was rarely used this way in combat, and it makes it very easy for enemy fighters to approach and attack you from your defenceless belly. Also, the bomber's maximum payload of 3 x 1,000 lb of bombs is not enough to destroy an enemy base in Realistic battles, which is useless in regards to decreasing ticket count and, most importantly, does not help your team. Thus, leave base bombing to the British heavy bombers you will likely also encounter on your team, whose payloads vastly outclass yours, and instead - if you wish to help your team as much as possible - use your five nose-mounted Browning machine guns on ground targets. Ground target strafing is not only infinitely more exciting than base bombing, but it can also lower the enemy's ticket count drastically, therefore helping your team win. Fly at low altitudes and attack light pillboxes and soft targets with your guns. If you fail to destroy a target, then pitch up and use your turrets to finish it off. Save the bombs for targets the .50 cal guns cannot destroy, such as heavy tanks and heavy pillboxes; the bombsight is very helpful in doing this (something which the dedicated strafing variants such as the PBJ-1J lack). Make sure to use a fuse timer, 3 seconds should be enough when bombing at treetop level with 1,000 lb bombs.

When strafing, be sure to watch your minimap at all times for any incoming enemies so you can adequately prepare for an attack. When being attacked, try to identify the attacker. If the attacker is of lower rank or a vehicle that don't have a lot of frontal armour, try to perform a head-on attack on them. All of the B-25's frontal .50 cal are in the center so it is very easy to snipe their pilot or blow out their engine with the .50 cal firepower. However if they are a lot stronger than the B-25 (basically any German heavy fighter or very high-ranked aircraft the B-25 can face) or they try to manoeuvre out of the frontal gun fire (don't chase them because the B-25 is not very agile), fly away from the assailant and try to get them on your tail, and manually open fire with the defensive guns while they try to turn to get behind the B-25, making sure to watch your tracers and adjust the direction of fire, so they hit the target. Remember that the turret guns will jam if fired for a long duration, requiring them to be reloaded, which usually takes almost twenty seconds, during which an attacker will most certainly destroy the B-25. If the reticle starts blinking, the guns are very close to jamming, so immediately stop firing and wait for the weapons to cool down. Many experienced players will attempt to utilise the dead zones on your belly and the arcs beyond your twin rudders in their attack. If you find an enemy doing this to you, then switch back to flight view and manoeuvre so that they are in the firing arcs of your guns again and try as much as possible to keep them out of your dead zones and, mostly, make their attack as difficult as possible. The attacker will then either eventually lose patience and try for a head-on, or you will get a successful snipe on their aircraft. It is also very advantageous to use the keyboard controls for pitch, roll, and yaw in the gunner view as it will allow you to make small manoeuvres while still concentrating on defending yourself, letting you, for example, dodge fire or roll/pitch/yaw and shoot someone in your dead zones. Also, use Universal belts for your turrets as they will do the most damage to enemies and cause devastating fires. While doing all these activities, look for the closest ally or friendly ground anti-air gun. Their cover can give the B-25 player an advantage in the fight against the pursuers. 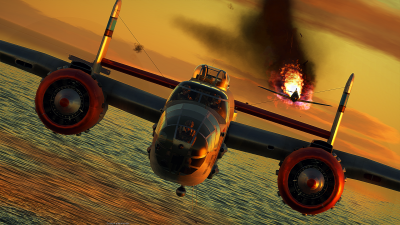 B-25J-1 showing how deadly the tail gunner can be.

If you lose tail control for whatever reason, then immediately turn back to the airfield and use combat flaps to keep your nose up. Make a landing by alternating between takeoff and combat flaps and, if needed, landing flaps. Make sure that your speed does not go too low; if you start nosing down with takeoff flaps then do not use landing flaps (unless in an emergency) as you'll lose speed and potentially crash. Instead, engage WEP and wait for your nose to rise. There is no set method for doing this and it takes lots of practice, but making these daring landings is very rewarding. If you lose an engine, do not engage flaps as you will lose speed, end up in a stall and will die, fly straight and slowly make your way back to base, using WEP if needed. If using manual engine controls, close the radiator of the dead engine, feather it, and open the radiator of the working engine to allow you to use WEP all the way back to the airfield without overheating.

Approach at 150 km/h (92 mph/80 kt), flaps set to landing. Keep applying about 60% thrust, or as necessary to maintain 150 km/h. Touchdown at the beginning of the carrier runway, slightly to the left to avoid the island. Apply hard braking, immediately retract flaps, and if necessary fire forward-facing guns to utilize the recoil to stop faster.

Early in 1939 as tensions were rising throughout Europe, the Soviet Union and Asia, the United States Army Air Corps (USAAC) issued requirements for a new medium bomber contract. Specifications for the medium bomber included carrying a payload of 2,400 lb (1,100 kg) while flying over 1,200 mi (1,900 km) at a speed of 300 mph (480 km/h). Fortuitously North American Aviation (NAA) already had a previous design for their NA-40B which they had already built as a prototype known as NA-62. After initial service tests, the USAAC placed an order with NAA to produce the NA-62 as the B-25. Alongside the B-25, the USAAC also ordered the Martin B-26 Marauder into production, though it was still only drawings on paper.

NAA had a head start through utilising their existing NA-62 aircraft. Initially, the plane had a constant-dihedral or and upward angle to the main wings. Unfortunately, this configuration caused stability issues which resolved when the wing shape became slightly anhedral just from the engine nacelle to the wingtip. The flattening of the outer wing led the aircraft to have gull shaped wings; however, this eliminated any stability problems previously encountered. Though not as noticeable was the increase in the size of the tail fins and decrease their inward tilt. These factors would also help improved stability and increase the aircraft's responsiveness, especially when carrying heavy loads.

Development continued through 1941 and in 1942 the first B-25A and B-25B models reported for duty with the USAAC. Variants of the B-25 from B through H changed over time, and the military experimented with using the aircraft as a bomber and a strafing aircraft specialising in an anti-shipping role with its skip-bombs, 14-18 forward-facing machine guns or even a 75 mm M4 cannon. The B-25J versions of the plane were essentially the same as a B-25H; however the 75 mm cannon was removed, and the nose of the aircraft was changed out. Now there were two versions of the nose which could be field swapped to change the usage of the aircraft. The B-25J-1 strafer version incorporated a metal nose outfitted with eight 12.7 mm Browning machine guns while the second option utilised a glass nose with a single crew usable 12.7 mm Browning and single 12.7 mm Browning which was fixed and operated by the pilot often in conjunction with four blister mounted 12.7 mm machine guns. This aircraft while developed for mid-level bombing instead excelled as a low altitude strafing bomber, often flying at tree-top levels and at times mast-level with ships. Frequently strafing B-25s lead the charge to eliminate enemy gunners and anti-aircraft instalments while bomber B-25s followed immediately behind to destroy airfields or vessels, often causing havoc at the target site.