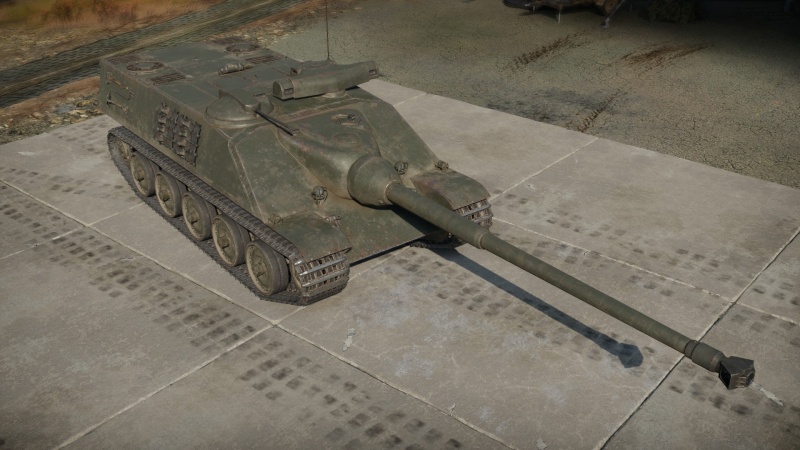 The AMX-50 Foch is able to withstand every single round it faces in combat except HEATFS and 105 mm APCR sub-calibre shots frontally. It is often confused with the CA Lorraine and vice-versa due to its similarities in profile, size and frontal plate. For the same reason, people may think you are fragile yet you are one of the toughest armour to crack at the battle rating. Only the front is the strong section of the tank. Roof, rear and sides are the most vulnerable places of the tank, even for 20 mm autocannons.

APBC: This is the first and only anti-tank ammunition the AMX-50 Foch. Despite having a "low" penetration (compared to other rounds seen at the battle rating) it should not be underestimated. It has the penetration to deal with all heavy tanks frontally (with exception of Maus and E-100) as well as enough spalling to destroy lightly armoured vehicles. This round is a 90% confirmed knock-out with a single shot due to its tremendous mass.

The MG151 can be considered as one of the most reliable HMG (Heavy Machine Gun) in game due to multiple factors: ammunition capacity, muzzle velocity and penetration, stopping power and rate of fire. It is a Jack-of-all-trades when it comes to ground battles, it has a faster muzzle velocity than 20 mm cannons but has more destructive power than the 14.5 mm (Russian HMG calibre) machine gun but it overheats really fast. The MG151 is almost exclusive to this specific tank and is able of doing multiple things:

During the early 1950s, DEFA worked to produce the third version of the AMX-50 heavy tank which featured a 120 mm self-propelled gun, however, during upgrades weight became a factor severely hampering the speed of the vehicle. 1955 saw a team of seventy German engineers brought in to help solve the problem maintaining the 120 mm cannon plus have the necessary armour and maintain a 65 km/h speed. Due to the delays and problems encountered during construction, only five prototypes were constructed and only one was finished which became known as the Canon Automoteur AMX-50 Foch, named after the supreme allied commander during World War I, Marshal Ferdinand Foch, general and military theorist. The main purpose of the AMX-50 "120 mm" was to provide long-range support for the medium AMX-50 "100 mm" tanks. An ambitious task of designing a version with a 155 mm cannon was started, however, this never made it past the drawing stage.