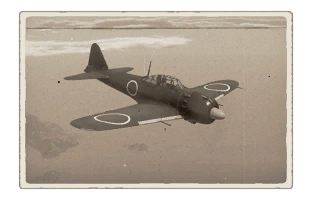 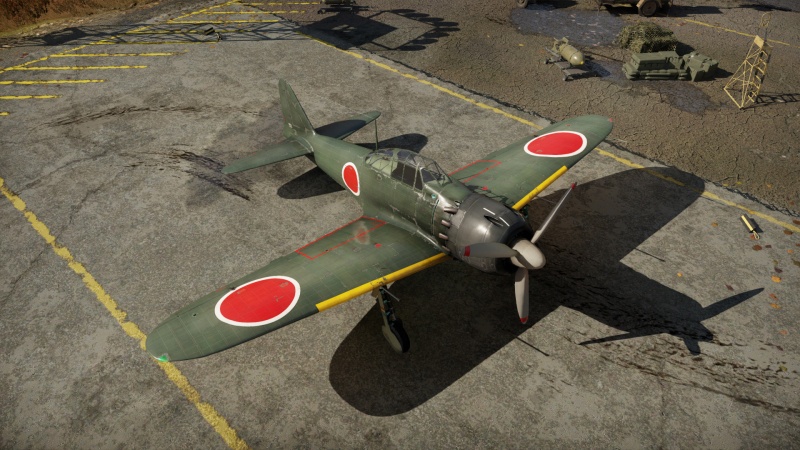 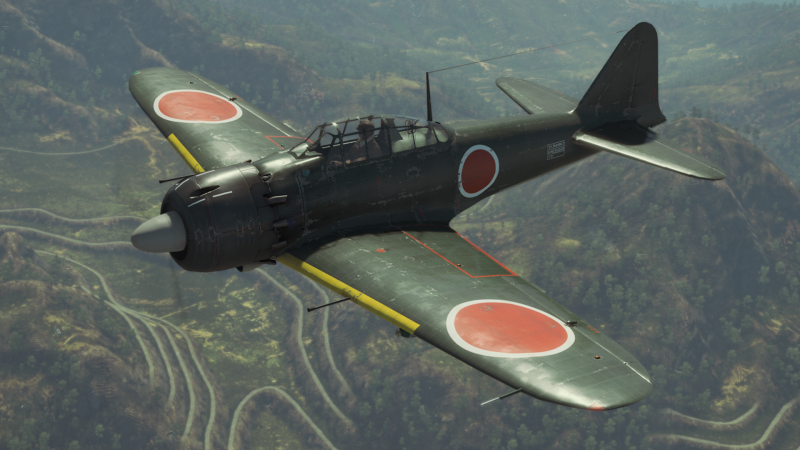 The last main-production variant of A6M series is the Model 52, once more the wings get redesigned, making them shorter and increasing the max speed. On top of wing changes, the engine peformance was improved due to the modification of the Sakae engine's exhaust system to point the stacks aft and distributing them around the forward fuselage, providing an additional increase in thrust.

The A6M5 mod. 52 retains the armament of the A6M3 mod. 22A (Ko) which fielded the better Type 99 Model 2 (20 mm) over earlier A6Ms. The A6M5s in War Thunder also come with a late-war modification which allows them to be converted into "bakusen", mounting a 250 kg bomb in place of the centerline drop tank.

The A6M5 excels at low to medium speed turning engagements. It possesses an excellent horizontal turn time combined with an acceptable roll rate. This allows the plane to be an absolute monster if opposing planes get slow enough for it to catch and force them into a dogfight.

However, with its impressive dogfighting characteristics come the Zero's inherent weakness: speed. It is vulnerable to enemy fighters that do not engage it on the Zero's terms at low speed and instead chose to stick to high-speed passes.

There is a less noticeable decrease in the wingspan of ~1 m leading to slightly worse turning performance over early Zero variants but it helps push the speed to 565 km/h.

The A6M5 can be outfitted with the following ordnance:

The A6M5 is an excellent dogfighter, nearly peerless in a low-speed engagement, even the renowned Spitfire looks clumsy and slow compared to an A6M5. However, it faces some extremely difficult opponents. Many opposing fighters tend to be specialized in performance-based energy manoeuvres with Boom and Zoom fighting styles rather than the classic turning and dogfighting of the A6M5. This can lead to the A6M5 struggling to engage them on the offensive due to its weak performance and low top speed and all too often is forced onto the defensive. The Zero is capable of evading attacks and striking back, but it requires a confident and knowledgeable pilot.

Aircraft position is incredibly important to the A6M5. While it can win any dogfight, a low-speed Zero distracted by getting its guns on target is a very easy target to dispatch. If in a dogfighting stance, success can be had with the A6M5; but to excel, consideration between different tactics need to be had. Pick the battles and only use dogfighting as a last resort and attempt to use Energy fighting as the primary mode of attack when possible.

The A6M5 can begin with a disadvantage, spawning from carriers on Pacific maps. However, this can help the Zero as it is quite a good low-speed climber thanks to its low wing-loading, spaded it will climb to 6 km in ~5 minutes. For manual engine control users, climb at ~220 km/h (100% prop pitch, 30% radiators and supercharger change at 3.4 km on WEP or 4 km otherwise), this will place the plane in a good position to select targets at a similar altitude to the Zero's position. The A6M5 performs considerably worse above 5 km, so be mindful of the limitations to prevent being in a position of disadvantage.

When fighting on the offensive, select a target lower than the Zero, or in rare cases slower, then stick to Energy fighting and dive on them. Reset after each attack, resist the temptation to be drawn into dogfight. Battles can be won, but it will cost a considerable amount of energy that might be needed later. The fight might also leave the player distracted and vulnerable to other fighters, so stay cautious.

Be conscious of the Zero's low dive limit of 740 km/h so do not power dive onto targets. Many fighters will also be able to outrun the A6M5 in an extended dive, in these cases it is better to give up and recover than engage in a protracted chase that will ultimately equalize on energy.

When fighting on the defensive, speed is critical in engagement because most of the enemies will be considerably faster than the A6M5. Use the barest minimum to evade opposition fire to keep the speed as high as possible. The biggest and longest window to return fire on an enemy is when they overshoot and begin to zoom away. The A6M5 has a very low stall speed of 121 km/h with flaps, so pursuing an opposition fighter in a zoom climb is possible. However, the Nakajima Sakae engine makes it difficult to recover energy quickly so choose when to extend carefully or the Zero will end up lacking the speed to evade when the enemies begin to attack.

A preferred evasion tactic is to perform a shallow spiral dive; turn tight enough to keep out of the opposition fighters guns, but try to keep it just close enough to make the enemies believe they could still catch the A6M5 in its sights. A rather difficult manoeuvre, but this move can tease enemies into longer turns and cause them to burn more energy while on the A6M5 tail. The enemy's lowered speed will benefit when the A6M5 moves around to gun them, especially when the enemy overshoots.

The A6M5 can be a frustrating bird to fly due to the considerable disadvantages on the performance front while emphasizing on manoeuvres to get the enemy into the sights. However, a skilled pilot with the A6M5 can be immensely rewarding in surviving and securing kills in defensive flying. Not a beginner-friendly plane, but an A6M5 player surviving in the War Thunder battlefield can consider themselves a skilled pilot.

Belt Selection:
7.7 mm Type 97
Though not very effective weapons being 7.7 mm, time and patience with the aiming can still secure tallies and the weapons are still better than nothing. "Stealth" allows for sneaky attacks while having several incendiary rounds that could start fires. "Tracer" can also be used as a pure AP belt, so while fires may be hard to start, it may penetrate the cockpit armour and hit the pilot, or even force the enemy into costly defensive evasion to help put them into the Zero's sights.

20 mm Type 99 Mk 2
These are quite effective cannons even if the rate of fire is a little low at ~500 rpm. "Stealth" belt provides a pattern of three HEF and two AP-I rounds, giving a good rounded HE fragmentation and AP damage potential with the added bonus of not letting the opponents see the shells as they travel by. "Universal" belt with a one HEF-T, two HEF, and one AP-I pattern is a decent second choice if a tracer element is needed to aim. "Tracer" belt with pure HEF-T is rather excellent, but the tracer round has less explosive filler than the pure HEF shell, so overall power is reduced with the ability to guide each shot. Finally, "Ground targets" belt give a mix of five AP-I, one HEF, and one HEF-T with the AP-I more useful against fighting ground targets, especially when there are ground targets such as light tanks on certain maps.

All enemy fighters will be considerably faster than the Zero, but less able to dogfight so should be approached in the same way.

Bombers should be avoided unless confident in aiming and crippling the bomber on the first pass. The Zeros are quite fragile and the defensive gunners on a bomber can easily shred the A6M5 if it is not approaching fast enough to engage and disengage before being hit.

The Japanese had hopes of a new interceptor becoming available to fight against newer allied fighters. When no such plane could be produced, the A6M3 was modified to continue to fill that role. In late of 1943 changes were made to simplify the aircraft. These changes were made to help speed up production, as well to increase dive speed. The wings remained the same size and shape as the A6M3 Reisen mod. 22. Modifications were made including the removal of the wing folding mechanism. The A6M5 received heavier gauge wing skinning as well. Other noticeable modifications were made to the aircraft's exhaust. The A6M5 also had CO2 fire extinguishers installed in the wing fuel tanks starting from production number 4274 onward.