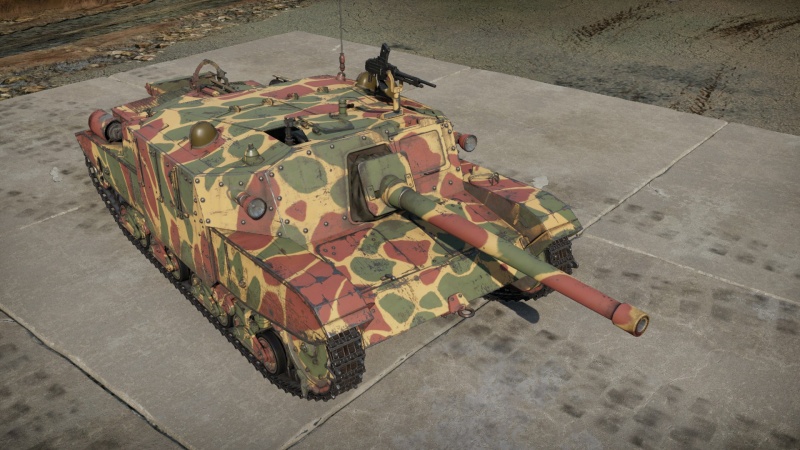 The 75/46 M43 has the same protection as the 75/34 M43 but sits at a higher battle rating, reducing its effectiveness. While still effective against earlier guns, it will begin to encounter enemies with weapons that can easily defeat its armour, such as the American 76 mm M1 or British QF 17-pounder. The upper glacis will be easily penetrated by these guns, and the superstructure, while more heavily protected, will similarly be easily penetrated, and due to the confined nature of the fighting compartment likely result in destruction of the vehicle. The lower glacis is easily penetrated at closer ranges, however the transmission will typically absorb most of the damage. Angling can be used to increase the effectiveness of the superstructure, however exposed cheeks become a weak spot for enemies to target. Using an obstacle to hide the vehicles cheeks while angling is important to maintain effective armour.

The 75/46 M43 has reasonable mobility for a tank destroyer, being able to hit and maintain around 37 km/h when driving off-road on level ground. The vehicle has an average reverse speed, reaching -6 km/h in its single gear. Despite its lack of neutral steering, the 75/46 M43 can traverse its hull reasonably quickly from a full stop, greatly helping to overcome its lack of a turret.

The Semovente's M43 75/46 lacks any kind of turret, which has its benefits and its disavantages. At a distance, the Semovente's M43 75/46 limited traverse is less a handicap and makes it harder for the weak spots of the vehicle to be hit. The vehicle's primary advantages include its low profile and powerful gun which can easily defeat most enemies it will encounter at range while remaining a relatively obscured target. Using the vehicle's gun depression and low profile to take advantage of terrain, such as a rock, building, or hill, will make it harder to hit, increasing its survivability. Unlike other Self propelled guns, the Semovente's M43 75/46 does not have unreliable armour, this allows the vehicle to play a more aggressive role.

Against weaker enemies, such as vehicles equipped with the American 75 mm M3, it can more aggressively expose itself, but care must be taken in case the M43's mobility is impaired or against vehicles with more powerful guns. If you play too close to the frontline, most tanks will be capable of disabling you due to your weak sides. If you are exposed any enemy can simpily flank you and easy take you out of the match without too much effort.

In terms of armament the 75 mm OTO 75/43 mod.40 gun can defeat most enemies at its ranking, with only some heavier tanks able to effectively resist the gun, such as the Churchill VII or the uparmoured KV-1 (ZiS-5). In this case, waiting for the enemy to expose a vulnerable area of their armour or identifying them for allies to target is ideal. Attempting to flank or more aggressively approach should be avoided. If facing higher ranked vehicles, more caution must be used, as there will be more enemies able to resist your fire while being able to defeat your own armour. Knowledge of appropriate weak spots can help defeating vehicles like the M4A3E2 Jumbo or IS-1 tanks, but these may be unreliable, meaning a more cautious approach is safer.

Mobility wise, it's not the greatest but it will be adeqaute enough that you won't usually be lagging behind your comrades in a match unless the map features a lot of muddy terrain or water. Its good to note that the Semovente M43 75/46 has weak sides, if you expose your tank to enemy vehicles you won't have enough time to react. So it is overall vital that you do not get flanked and you always have friendly tanks to aid you whenever you are in trouble.

The story of the Semovente M43 75/46 began during the late stages of the second world war. In mid-1942, the Italian Army put out a set of requirements for a new vehicle that could double up as both an infantry support vehicle as well as a tank destroyer, depending on the situation. In response to this, Fiat-Ansaldo and OTO Melara both began developing together prototypes around these requirements in parallel. The two competing designs primarily differed in the chassis choice. OTO picked the newer chassis of the P40 heavy tank whilst Fiat-Ansaldo chose to opt for a newer and larger version of the chassis already in production for their Semovente M42. This decision allowed Fiat-Ansaldo to complete their prototype much sooner. In February 1943, the Semovente 105/25 M43 was presented to military officials and was soon afterwards ordered into production, following successful trials. Production began in April 1943, with a planned production run of over 800 vehicles. However, with Italy's industry at this late stage of the war being severely crippled, production was slow and reaching such high production goals was more than unlikely. Just prior to the signing of the armistice in September, the 30th vehicle rolled off the assembly line. The Semovente 105/25 M43 proved itself in combat during the defence of Rome, where the SPGs successfully engaged German forces trying to retake the city. The 75/46 M43 is a further variant which was developed from the Italian Semovente 105/25. The main changes included improved armour to the vehicle, which greatly increased its surviability against allied tanks. Another change included the adoption of the German Pak 40 anti-tank gun in place of the original 105 mm howitzer.[1] Due end stages of the war, and the consistant bombardment of Italian factories and supply lines, it lead to the low production of the Italian-licensed version of the cannon. In the end only eleven 75/46 M43 were fully built, while others were outfitted with the available Italian 75 mm Ansaldo L/34 gun, leading to the production of the 75/34 M43 tank destroyer.