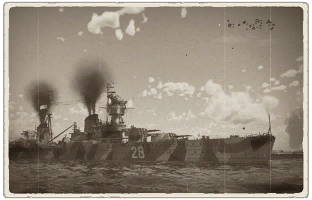 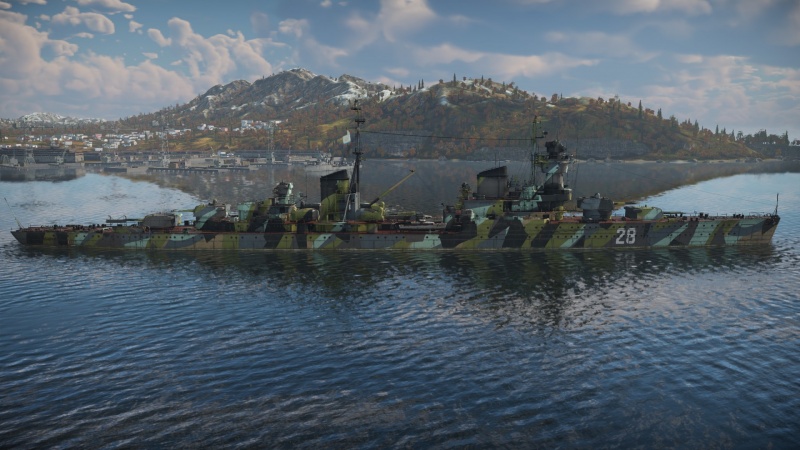 The Pr.68-K, Zheleznyakov, 1951 is a premium rank IV Soviet light cruiser with a battle rating of 6.0 (AB/RB/SB). It was introduced in Update "New Power".

While this cruiser's armour is not enough to protect you from semi-armour-piercing and armour-piercing shells, it is still enough to prevent major damage from being easily inflicted by every shell that comes your way. Destroyers and any HE shell will have trouble with anything belowdecks, as the main battery ammunition, engines, and transmissions are all protected by 100 mm of rolled homogeneous armour. The front and rear belt armour are only 20 mm and 30 mm thick RHA; while this isn't very useful, there is also not much in those areas that can damaged besides the steering gear in the stern. The ammo elevators are protected by 130 mm RHA, while the turrets themselves have 175 mm thick fronts. The turret sides and rear are much thinner but this isn't a major problem as long as you keep your main batteries pointed towards whatever is shooting at you. Secondary batteries have 20 mm thick antifragmentation armour, which is only useful against smaller autocannons and strafing aircraft. Anti-aircraft batteries have no armour at all and are often knocked out. The bridge has a 130 mm thick belt surrounding it but can still be knocked out by rounds exploding above and below it.

While this ship is still a light cruiser, it can survive quite a bit of damage before succumbing due to its effective belt armour and main turrets that are tough to knock out. It isn't recommended to expose this ship to torpedoes though, as they often explode below the belt armour and unleash catastrophic damage. Aircraft bombs are still a threat to the crew compartments and weapons, as the turtleback armour is very thin and already below many of these modules. The crew of 1,184 can last you for a long time, but the compartments they are housed in are easily knocked out so it is best to not get into close-quarters combat or engage multiple targets at once.

The Zheleznyakov has a max speed of 61 km/h which is pretty good for a ship of its size. Turning ability is pretty standard for a cruiser, but it will still have issues avoiding close-in torpedoes or aircraft-dropped ordnance.

The Zheleznyakov sports four triple-gun turrets, two fore and two aft, equipped with the 152 mm B-38 cannon. These guns have rather high firing arcs at long range, but work very well at short-medium range and have access to multiple effective shell types. All rounds have an initial muzzle velocity of 950 m/s.

The Zheleznyakov comes equipped with four SM-5-1 secondary mounts, each packing two 100 mm dual-purpose guns. These are excellent weapons for close and medium range with good ballistics and shell speed (all but the AA-VT shell have a muzzle velocity of 1,000 m/s, while the AA-VT gets 995 m/s). However, there are only two turrets on each side of the vessel which limits their overall usefulness.

The anti-aircraft armament of the Zheleznyakov is a mixed bag. The fourteen twin 37 mm V-11 automatic cannons are devastating against enemy aircraft, but compared to other autocannons have a less than stellar aiming speed, allowing manoeuvrable aircraft and/or skilled pilots to easily evade their deadly shells. Against enemy coastal vessels and unarmoured destroyers, these can be incredibly powerful due to the massive amount of ammunition they can send downrange and are useful for every scenario you can find yourself in. The long range of these guns allows you a longer time cushion to engage aircraft than smaller autocannons, such as the 25 mm mounts on Japanese vessels, would allow.

Eight of the fourteen turrets are mounted on the sides of the forward superstructure, four on each side. The remaining six are positioned just forward of the rear main battery turrets, two on each side and two raised up on the ship's centerline. This usually means that six to eight of the turrets can fire on enemy vessels to either side, with more turrets being usable against aircraft due to their higher relative elevation.

The Zheleznyakov is a ship that can fill many roles, but is most successful at duking it out with enemy destroyers and cruisers. While it isn't recommended, this ship can find some success in close-quarters combat due to the quick reload of the main guns and a large number of secondary and AA batteries. The ship is at its happiest when it can fire at enemy ships from medium range without return fire, or when supporting a larger cruiser or battleship with its fast-firing guns.

One of the five Chapayev-class cruisers completed for the Soviet Navy, Seventeen were originally planned, eleven were ordered, and seven were laid down. Two were destroyed during World War 2 when their shipyard was overrun by German forces, while the other five were not completed until 1950.

The Zheleznyakov was laid down on October 31, 1939 and launched on June 25, 1941. She was mothballed soon after, finally entering service with the 4th Fleet on September 7, 1950. Afterwards she served in both the Black Sea Fleet and the Baltic Fleet before being withdrawn from the Navy on April 18, 1961 and reclassified as a training ship for air surveillance radar operators. She was disarmed and discarded from the Navy on October 21, 1971, stricken on March 15 of 1976, and then broken up in 1977.

The Zheleznyakov's namesake was Anatoli Zheleznyakov, a Russian sailor known for dispersing the short-lived Russian Constituent Assembly during the October Revolution and for his death at the hands of anti-Soviet White Army members while helping the armoured train under his command escape from an ambush.