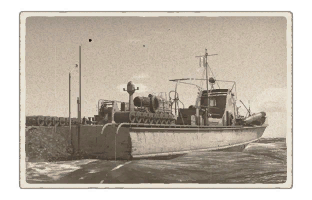 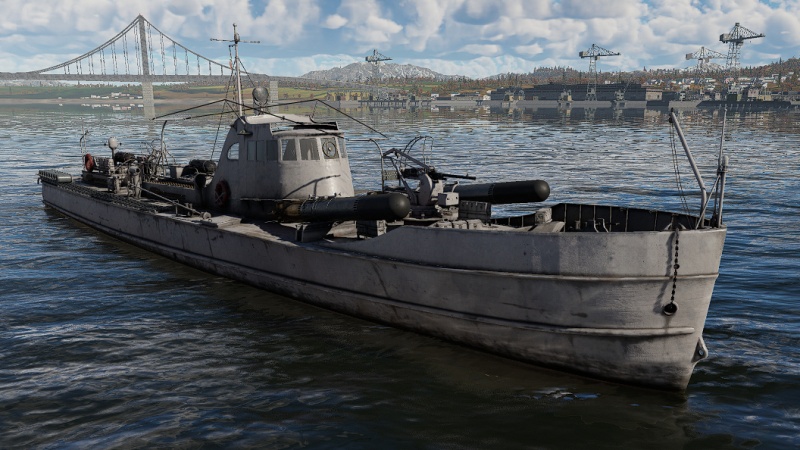 The Baglietto 68t, VAS 201 is a rank I Italian motor torpedo boat with a battle rating of 1.3 (AB/RB/SB). It was introduced in Update "Starfighters".

The VAS 201 does not have the best of mobility. With a top speed of 53 km/h in AB and 38 km/h in RB, she will get overtaken by other torpedo boats easily. Even larger subchasers and minesweepers can keep up with you. Turning time is as expected for a low tier ship - quite good, allows easy dodging of torpedoes and bringing your rear gun to a target. And you will do that often.

The VAS 201 is equipped with two 20 mm/65 Breda autocannons, one at the bow and one at the stern. When facing forward, only one gun can shoot and in order to get the rear gun on target, a large part of the ship needs to be exposed. The autocannons themselves have quite a low rate of fire and very small clips of 12 shells, although they are reloaded very quickly. The damage is similar to the German or the American 20 mm autocannons, although it has a lower damage than the German one and lower fire rate compared to the American one

The VAS 201 is equipped with 2 x W.200 torpedoes. They are average in most statistics, although they have a somewhat low speed. As the boat faces entirely small and nimble enemies, torpedoes in general are not too effective as the enemy can dodge them with ease. In the low tiers, torpedoes are very situational, so it's advised to leave the ship without torpedoes as they can act as an external ammorack, which can destroy the ship if hit.

The VAS 201 can equip 16 x B TG depth charges. They are next to useless, as they are made to destroy submarines, which are not yet in the game and all ships can escape the blast of the depth charge. Overall it's a very situational weapon, that's not advised to use or equip, as it can act as an external ammorack, which can destroy the ship if hit while not adding any considerable advantage.

The VAS 201 is a slow game ship - its biggest drawbacks are the poor top speed, small clips and no protection whatsoever. Sadly these cons cover most of what can make a ship good so the VAS just is quite a below average ship, especially compared to the MS-15 (same firepower and survivability, almost twice the speed) and S-38 (pretty much better in everything except size). Overall, although it's not quite the best you can have, it's still a solid boat for its battle rating.