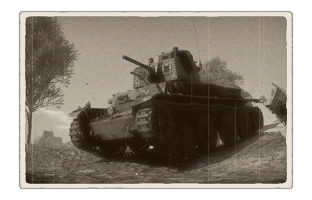 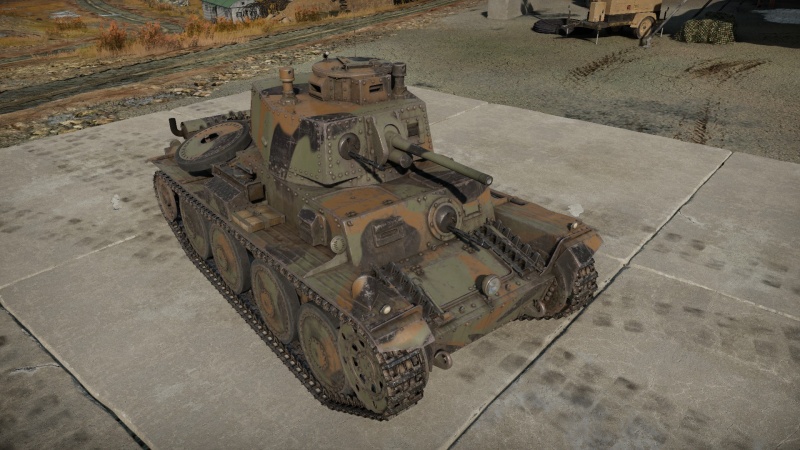 The Stridsvagn m/41 S-II is a rank II Swedish light tank with a battle rating of 2.3 (AB) and 2.7 (RB/SB). It was introduced in Update 1.97 "Viking Fury". It is a Swedish license-built version of the Czechoslovak TNHP light tank, and is thus quite similar to the German PzKpfw 38(t).

The Strv m/41 S-II has one advantage over its counterpart Pz.38(t) F and that is higher horsepower, but it's also a bit heavier by 0.8 tons. The mobility of the Strv m/41 S-II is also almost identical to that of the PzKpfw 38(t) Ausf. F. It is more sluggish than the other Swedish tanks such as the Strv m/40L, with a lower top speed and a rather slow reverse gear.

The 37 mm Bofors is a decent gun but not as great as some other vehicles like the M3A1 Stuart or the BT-7 that have great penetration capabilities and good damage output. The Strv m/41 S-II has slpprj m/38 and slpprj m/39 APBC rounds which can penetrate the more lightly-armoured vehicles and has some trouble with angles. However, the Strv m/41 S-II can easily take on heavier armoured vehicles once 3,7 cm slpprj m/49 APDS round is unlocked.

The part that truly differentiates the Strv m/41 from its German cousin is the gun. The Strv m/41 uses a Swedish-made 3,7 cm kan m/38 instead of the original Czechoslovak Skoda 37 mm cannon. Its performance with the slpprj m/38 and slpgr m/39 APBC rounds is similar to that of the Czechoslovak gun, but the Swedish gun also has access to the outstanding slpprj m/49 APDS round. This round will easily penetrate anything the Strv m/41 can normally face, though it lacks the lethality of the German APCBC with explosive filler. 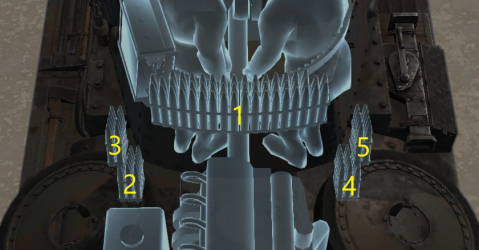 The Strv m/41 S-II is also armed with a coaxial 8 mm ksp m/36 light machine gun. There is a second, non-functional 8 mm machine gun in the hull front.

Having APDS at such a low battle rating makes the Strv m/41 S-II a great vehicle to do ambushes in and deal with heavier armoured vehicles like B1 bis and M4A3 (105) if it can get the first shell fired into a vital spot. It also gives the Strv m/41 S-II the capabilities to fight at longer ranges than its opponents , making the armour of the vehicle more efficient. The main drawback with APDS is its comparatively weak post-penetration damage, having to pick off the crew of larger vehicles like T-28 and LVT(A)(1) one by one.

The Strv m/41 S-II shines if it gets to fight a vehicle on its terms, meaning to keep at a distance and wear the enemy down by using the APDS shells. The 50 mm frontal armour can be a saving grace in close quarters combat, but with the weak side armour it's best to keep distance instead rushing in. The Strv m/41 S-II can also shine in ambushes and hull-down positions where the enemy has to advance to it or do not know where it is, and it can get good shots on their sides. However, the tank can also be effective in direct confrontation, even if it is not the ideal situation.

In March of 1940, Sweden ordered about 90 TNH tanks (known as the Panzer 38(t) in German service) from ČKD, but Germany, which had occupied Czechoslovakia in 1938, confiscated the tanks for its own use as the Panzer 38(t) Ausf. S. Sweden still needed the light tanks, and after negotiations the Swedish manufacturer Scania-Vabis was allowed to produce them under license, and compensation for the lost tanks. Sweden ordered 116 Strv M/41 SI in June, 1941. The Stridsvagn M/41 was armed with a 37 mm Bofors m/38 gun, was powered by a Scania-Vabis Type 1664 engine, and the design utilized riveted construction. In June of 1942, Sweden ordered 122 Strv M/41 SII. The SII featured a number of improvements over the SI. The armour was increased from 25 mm to 50 mm thick. Because of the added weight of the armour, a more powerful engine was added, the Type L 603 engine. This necessitated an elongation of the hull by 65 mm. The fuel tanks were increased from 190 litres to 230 litres. 104 of the SII model were built, with the last 18 being built as the Sav M/43, a casemate assault gun using a 75 mm gun, and later a 105 mm gun. Another 18 Sav M/43 were purpose-built afterwards. The Strv M/41 served until the late 1950s, when all Strv M/41 were converted to the Pansarbandvagn (Pbv) 301, an armoured personnel carrier. The turrets were used in static fortifications.