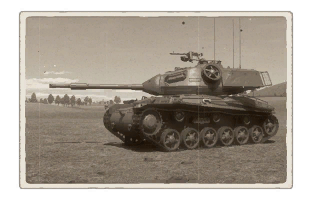 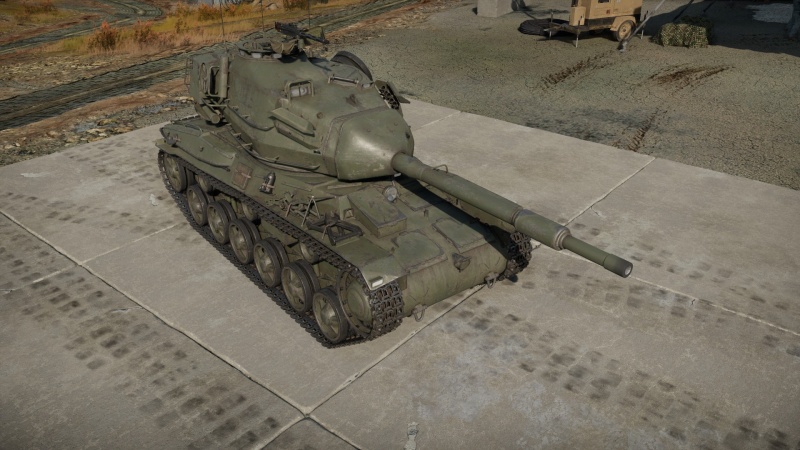 Like the rest of the Swedish line, the armour on the Stridsvagn 74 should not be counted on to bounce a shot. It uses the same hull of the Strv m/42 (The Lago I)- a hull that at its BR the armour is considered fairly average. The new modern turret is extremely massive- almost the same size of the hull itself! This size makes hiding behind low objects impossible.

The turret does however have one niche trick up its sleeve, the back of the turret. An opponent who isn't well versed in the Swedish tree would assume the the back of the turret would house ammunition. However for the Strv 74, all the ammo (excluding the ready rack) is stored in the hull instead. With the inclusion of the 10 mm back plate, the turret back can act as a shot trap when caught off guard, allowing the Strv 74 to react accordingly - by returning fire or deploying one of the 2 smoke barrages and relocating. 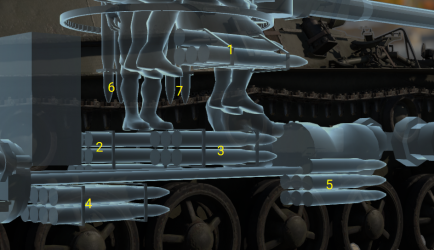 Ammo racks of the Strv 74

Additionally, the internal layout of the vehicle is fairly cramped. With three crew members located in the turret, an APHE shell fired there can easily knock out enough crew members to destroy the vehicle. A shot fired into the front of the tank is likely to do the same. This makes it even more important to avoid enemy fire.

After the end of World War 2, the only medium tank Sweden had was the Strv m/42. This vehicle was no longer capable, and had become obsolete. The Swedish military considered buying French AMX-13's, but decided to instead buy the British Centurion. Sweden had a need for a light tank still, and decided that designing a new light tank would take too long and be too expensive, so instead they decided to create a new light tank with the chassis of the Strv m/42. The Strv m/42 had been retired in 1950, and in 1953 the process of upgrading the tanks was started. First, putting the turret of the AMX-13 on the Strv m/42 chassis was considered. This would be impossible, because the turret rings had different sizes. Instead, a new turret was designed. It was armed with a 7,5 cm lvkan m/36 anti-aircraft gun modified for use in a tank. The Swedish military supported this design because it would be cheaper than buying a foreign tank, and ordered two prototypes in 1954. The Strv m/42 EH was not chosen to hold the new turret, as its engine was unreliable, but the Strv m/42 TH and TV were chosen to house the new turret.

The turret had a unique shape, it was heavily sloped on all sides, but the armour was at most only 20 mm thick. The armour was kept to a minimum as the suspension would not be able to handle more weight. It shared many components with the Centurion. The back of the turret contained a Volkswagen engine used for heating and insulation. The gun could depress to an impressive -15 degrees. The chassis had to be modified in order to handle the increased weight of the new turret. The shock absorbers were replaced, the steering mechanism was changed, the driver's hatch was changed, and the tracks were widened to decrease ground pressure. The twin engines of the Strv m/42 TH and TV were replaced by Scania-Vabis 607 engines. These increased the horsepower, and they increased reliability at low temperatures. Smoke dischargers, a spare road wheel, and a bustle rack were added to the turret. The vehicle carried a crew of 4 men.

225 Strv m/74 were ordered by the Swedish military, and the order was spread between Hägglunds & Söner and Landsverk. There were two variants, the Strv m/74 H (based on the Strv m/42 TH) and the Strv m/74 V (based on the Strv m/42 TV). The only major differences between the two was the gearbox. The Strv 74 was designated as a light tank until the 1960's, when it was re-designated as an infantry support vehicle. When the Ikv 91 entered service, the numbers of Strv 74 decreased as the Ikv 91 could do everything better than the Strv 74. The Strv 74 was fully retired from service by 1984, and some of the turrets were used as static fortifications until the late 1990's.