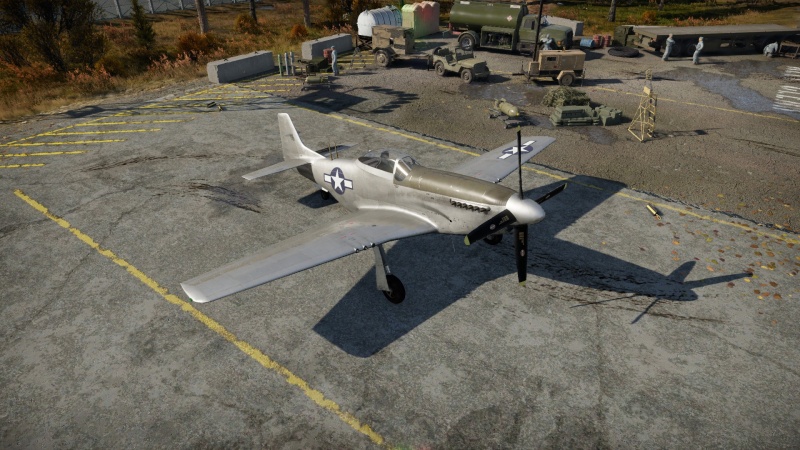 The P-51D-20-NA can be outfitted with the following ordnance:

Probably the best asset P-51D has is its speed and its ability to achieve it and maintain it. Like with all planes, higher attitude should be achieved. Although its climb rate is nice, there are enough planes with better and therefore pilots of P-51D should plan ahead and not wait for the last second to climb. Best way to climb at the start is to climb towards the corner of the map, so the enemy will be encountered later when P-51D is already high enough. When an enemy is spotted, heading in another direction than P-51D, this aircraft can enter mild dive and go for strafe run. After that, it is important to continue heading in the same direction, so the speed is maintained. Even the most agile fighters won't be able to turn quickly enough to fire just one shot at you. If feeling confident or sure about the kill, P-51D should get at least +2 km away from the enemy and then start to turn towards him, depending on its speed. If speed is under 500 km/h, a bigger distance should be achieved before attempting a turn. This ensures that turn will be completed before the enemy gets to 1 km distance, so you won't give your enemy opportunity for the first shot. However, head on assault should be done only against weaker opponents, since .50 cal does not have the punch of 20 mm or 30 mm that same tiered planes carry. Salvo of 50 cal rounds from tracer belt can easily and often does ignite enemy engines upon impact, but few hits from 30 mm will tear wings of P-51D, while fire can be taken out.

When engaging enemy bombers, aim for their engines. When engine catches on fire, focus on another engine until it also burns and so on. It is likely that fire will be taken out, but the damage done by 2 to 4 burning engines will be so severe that enemy bomber will either crash within next minute even without one more hit or he will lose altitude so much that it will be an easy target for lower flying teammates. Bigger bombers like B-17 should not be followed for more than few seconds, as an engine of P-51D is too fragile and often will turn red upon first few hits, which gives you about 1 to 2 minutes before its engine dies completely. It is especially important to engage B-17 from relative higher altitude, gain little more speed and aim for engines. A well-aimed burst of tracer belt rounds should be enough to ignite 1 or 2 engines during this. Keep in mind that B17 can fly even with just one single engine and maintain its attitude and speed. Do not attempt to cut off wings of bomber like with bigger guns, as it is quite hard to do so with 50 cal. When engaging bomber with huge glass cockpit like on He 111, front assault with a salvo of 50 cal rounds has high chance to kill its pilot with the number of rounds that will be fired.

It may seem that agility of P-51D is lacking at first sight, but it is not that bad when used correctly. P-51D has a good turn rate at higher speeds and its pilots should try to keep well above 400 km/h. When at a speed around 500 km/h, even Spitfires will have troubles getting behind you. However, P-51D should avoid these encounters as this will bleed its speed to the point that P-51D will be no longer able to turn with the enemy. If a window of opportunity arises, for example when an opponent starts his turn into the wrong direction after attempting to outmanoeuvre P-51D, P-51D can enter mild dive and go for a run. P-51D can get to its top speed quite fast, especially when in mild dive. Top speed of P-51D is one of the best on its tier. These three-speed factors will help you run away from many opponents, giving you a chance to set your own rules of engagement with them. When running away with the enemy closing in, try to avoid climb at all. If a climb is desired, it is best to wait until it is safe. If climb cannot wait, try to climb below 10 degrees. When an enemy with much higher speed is catching up with you at higher attitude, mild dive may not get you fast enough to your top speed. In these situations, deep dive can be done. During this, the enemy will get even closer to P-51D. As the top speed of P-51D is quite high, after the enemy loses his initial speed advantage, P-51D will probably already start to get away. After this deep dive runaway, start to climb around 10 degrees. P-51D is good at maintaining its speed, so it is likely that while P-51D will continue to move around 800-850 km/h after deep dive for a couple of seconds, many opponents will quickly slow down to their listed top speed. This should be enough to provide a safe escape. If running away is not an option, high-speed turn fight can be done for a short while. P-51D shouldn't prolong these encounters and should as soon as possible try to get away as already described in turn fights.

When an enemy is going head-on, he should be avoided. As already said, 50 cal cannot match 20 mm and bigger guns head on. Additionally, such an encounter will probably damage the engine, which will at the start take away the most important asset of P-51D and after a few minutes will lead to its failure. The vitality of pilot is average, so he may survive and so is the durability of its wings. However, control surfaces of P-51D are quite fragile. Head on should be done only with a weaker opponent, who has either much weaker armament or is already critically damaged. If the engine turns red, airfield should be sought as fast as possible. With red engine try to climb as much as possible in a way that speed will be at least slowly increasing. When the engine dies, glide towards airfield in a way little to none speed is lost to avoid a stall. If speed reaches 200 km/h and dive is not possible if the airfield is to be reached, use flaps as they will keep you in the air for little longer even at a lower speed. If combat flaps are not enough and even then P-51D starts to stall, raise flaps, open gear, use landing flaps and retract gear. Landing flaps will keep you in the air for even longer than combat flaps, but if they are deployed too soon, they will serve as air brake, which is not desired during glide.

Early in the war, the British ordered P-40 Warhawks from North American Aviation. North American promised to provide better aircraft designs to them sometime after the deliveries were complete. The prototype XP-51 was then developed. It had the same Allison V-1710 engine as the P-40 but was faster due to its laminar flow wing design. The XP-51 Mustang also had increased range and speed.

After being accepted into service, the P-51 mainly served as a ground attack aircraft as its engine lacked a two-stage supercharger and was underpowered at high altitude. In the P-51B, engineers decided to add the more powerful Rolls-Royce Merlin engine. This allowed the Mustang to fly at a much higher altitude at higher speeds. It was at that moment that the Allies realized its true potential as a fighter aircraft.

Thanks to the improved range, the Mustang was able to keep up with B-17 Flying Fortress and B-24 Liberator heavy bombers when they were sent to attack targets out of the maximum range of other designs like the P-47 Thunderbolt, the British Spitfire and even the twin-engine P-38 Lightning. 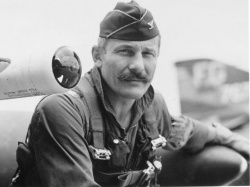 United States ace pilot Robin Olds, the only pilot to become an ace in a P-38 and P-51 during World War II.