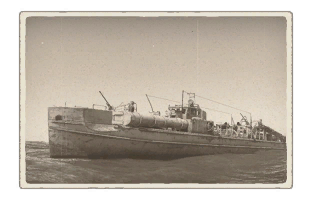 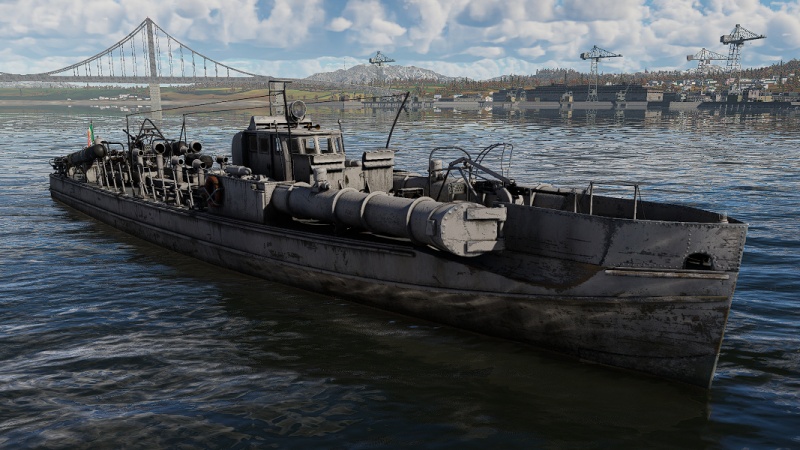 The MS-53 has a crew of 19 people, 40 mm of wood for protection in the hull and 15 mm of wood for the structure, meaning it can be easily destroyed by HE belts.

The MS-53 is powered by 3 Isotta Fraschini "ASSO" Engines that make it reach 58 km/h. It's slower than its predecessor MS-15 because it carries more additional armament. Turning speed and manoeuvrability are good for its BR.

As main armament, the MS-53 uses 2 x 20 mm/65 Breda cannons. These cannons cause little damage, and have magazines of only 12 shots before reloading. The cannons can take motor torpedo boats but not bigger targets.

The MS-53 is a slower version of the MS-15 but it got more additional armament that is 2 torpedoes so you have more possibility to destroy some enemies with the torpedoes. The cannon are quite bad because the 20 mm cause too much little damage, the best advice is not to attack frontally or get surrounded by the enemy but to go around them and shoot them from the side. You will immediately notice the little damage the cannons cause so it is recommended using 2 belts one AP for tough targets and armoured and the other HE for targets with little protection.

Main article: History of the MS-15 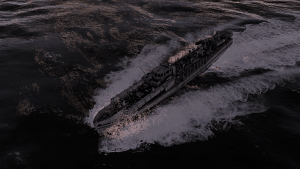 On 22 October 1942, MS-53 was launched at the Cantieri Riuniti dell'Adriatico in Monfalcone, entered service on 9 March 1943 and was assigned to the 5th Torpedo Boat Squadron (Va Squadriglia Motosiluranti).

MS-53 was sent in July to Sicily to operate against the Anglo-American naval forces engaged in the invasion of the island. In the same month, the MS-53 and its twin MS-51 took part in a violent battle against Allied torpedo boats off the coast of Acireale. In the night of July 21, MS-53, along with her sister ships MS-21, MS-51 and MS-66, attacked the British destroyer Quantock and the Greek destroyer Adrias east of Cape Campolato. During the combat at close range, the MS-66 was seriously damaged, on which the commander of the 5th Torpedo Boat Squadron, Lieutenant Commander Curzio Castagnacci, died. The destroyers Quantock and Adrias were slightly damaged and some members of the crew died after being hit by the guns of the Italian torpedo boats.

Afterwards, the MS-53, together with the MS-21, MS-65 and MS-66, clashed against the American PT-203, PT-214 and PT-218 motor torpedo boats in a confused night skirmish on July 21. The American torpedo motorboats, returning to Palermo (already occupied by the Allies on 22 July 1943) after a fruitless night attack to attack the ships involved in the evacuation of the Axis troops through the Strait of Messina, detected the Italian MS on radar and launched a salvo of torpedoes against them. The torpedoes, however, passed without exploding under the hulls of the Italian MS. Then, PT-218 attacked the Italian MS with its machine guns in a close encounter. A fight ensued, which ended with the PT-218 riddled with bullets and having suffered very serious damages, with many losses among the crew meanwhile the Crew of MS were unharmed and the Italian boats got minimal damage.

On 8 September 1943, upon the announcement of the armistice between Italy and the Allies, MS-53 was located in Crotone. The next day, at 2:00 AM, the MS-53, together with the MS-65 and the MAS 547, left Crotone bound for Taranto to avoid the risk of being captured by German troops moving in the area. The three small units reached Taranto at 8:30 AM. In the evening, the MS-53 (Second Lieutenant Mario Manusardi), together with the corvette Flora (Lieutenant Giorgio Volpe), escorted the tug Tarantola and the motor raft MZ 758, which carried a company of the Battalion "San Vito" sent to reinforce the garrison of the coastal battery "Toscano", which reported that German troops are approaching its stronghold with unclear intentions. The MS-53 remained based in Taranto until November.

During November and December 1943, the MS-53, together with the MS-54, 55, 56, 61, 65 and 73, was transferred to Termoli to be employed in special missions, alongside MS-31, 33 and 74 (moved there in October) of transporting and landing British informers and commandos on the Adriatic coast of Central and Northern Italy occupied by German forces.

The operational life of the MS-53 came to an abrupt end on the night between 31 December 1943 and 1 January 1944. That night a violent storm broke out in Termoli and created a breach in the pier, removing the mooring holds of the MS 53. The commander of the torpedo boat, Lieutenant Mario Manusardi, tried in vain to bring his unit to a sheltered corner of the port, but the engines did not respond, and the MS 53 would end up going on the land, causing damage to the hull.

On 22 January 1944 the MS-53 was towed to Manfredonia, with the escort of the MS-31. Here it could only be ascertained that it was impossible to restore the torpedo boat to full efficiency: consequently, the MS-53 - declared out of service - was laid up in December 1944, and never returned to service.

After the 1947 peace treaty, the MS-53 was assigned to the Soviet Union; on 18 May 1949 the MS-53 was removed from the naval cadre and formally incorporated into the Soviet Navy under the new name of TK-971, but was refused by the Soviet Navy because of her poor condition (in 1948 she was reduced to the hull), which made her restoration inconvenient. Returned to the Italian Navy, the motor torpedo boat was again decommissioned on 1 July 1950 and subsequently demolished.