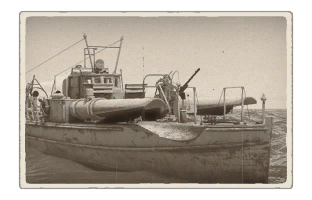 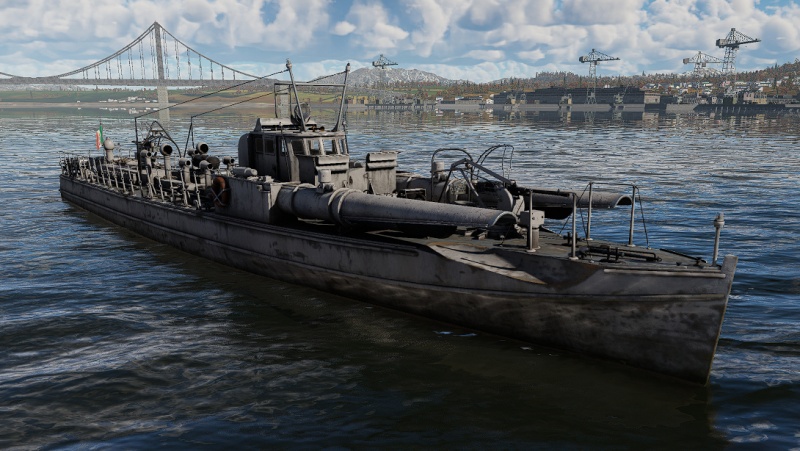 The CRDA 60t(1a), MS-15 is a rank II Italian motor torpedo boat with a battle rating of 1.3 (AB/RB/SB). It was introduced in Update "Starfighters".

The MS-15's armour consists of 40 mm of wood in the hull and the structure is 15 mm of wood. This ship can be easily destroyed by HE belts. For the survivability, the MS-15 has a crew of 19 people, which can easily be decimated by other ships. Don't engage enemies in a head-on.

The MS-15 is powered by three Isotta Fraschini "ASSO" engines that provides 52 km/h of speed (Upgraded 61 km/h). The turning speed and manoeuvrability are good for its BR, which helps eavade shots.

As main armament, the MS-15 uses two 20 mm 20/65 Breda cannons, seen previously on the VAS 201 and other ships. These cannons cause little damage and is divided into magazines, every 12 shots the cannon will reload. This is a bad thing in rough seas as it will be difficult to hit the targets with the available shots before having to reload.

The MS-15 can at best carry the following additional armament:

The depth charges B TG have 50 Kg of Explosive, they can be used very well when you are against a better-armoured but much slower opponent.

Remember to use your torpedoes in a good time because you have only 2 and they don't have a very long range.

The MS-15 is a normal fighting motor boat. Its biggest disadvantages are the small magazines for the main armament and no protection whatsoever.

It is a good rapid ship for its battle rating, the best advice is to not attack frontally or go into the mouth of the enemy. Go around them and shoot them from the side. Bring two different belts for dealing with different scenarios, one AP belt for fighting tough, armoured targets, and the on HE belt for fighting more thin-skinned ships. For dealing with larger vessels, use the torpedoes for a quick way to destroy them, although use the torpedoes only when certain they will hit or reach the target as the torpedoes have a rather limited range.

The Italian Motosiluranti (MS) are medium-sized ships, with good manoeuvrability, speed and with the property of carrying torpedoes to destroy ships, particularly large ones.

The Italian designers and admirals tried to obtain the design plans of the Lürseen motor torpedo boats, that is S-38, S-38b and S-100. They did not succeed and therefore decide to reverse-engineer the vehicles, adapting the new hulls to tested construction techniques and using three Isotta Fraschini "ASSO" engines that guaranteed a speed of not more than 32.5 knots.

In 1941, the 1st Group was created with 18 units of 62 Tons boats ordered from CRDA of Monfalcone. These boats were armed with two torpedo launchers of 533 mm, two 20 mm cannons and depth charges. The boats were numbered MS-11 in groups of 6 and every 6 units was a squadron of torpedo motorboats delivered in 1942.

In the unit formed by MS-16 and MS-22, they are well known for sinking the British light cruiser HMS Manchester during the battle in mid-August 1942

After WW2, the surviving MSs in the years 1960-1962 were refitted with new armaments such as 40 mm Bofors and other armaments. These upgraded versions were designated the MS-472, MS-473 and others.

They were retired from service in 1975 and eventually disbarred in 1979.

History of the MS-15 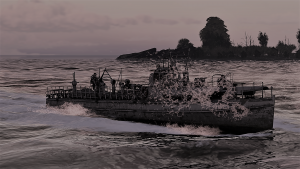 MS-15 was one of the boats within the 1st Group and as such was created in the first series production.

In service in 1942, it was sunk in October 1943, during the co-belligerence, by German air attack in the port of Leros in the Egeo Sea.

In the early years of WWII, the Italian Navy realized the drawbacks of the MAS series of torpedo boats. Namely, the vessels of this type boasted excellent speeds, but had less than ideal seaworthiness. As a result, the Regia Marina began looking into procuring a vessel that would address this problem in the early 1940s.

The answer quickly came with the fall of Yugoslavia and the subsequent seizure of their limited naval force by the Italians. Having found older German-built Schnellboots of the Lürssen type, the Italians soon came to the conclusion that these vessels ideally fitted the current needs of the navy. As such, the captured examples were taken back to Italy and a nigh identical design was derived from them by the shipbuilder CRDA. The design, designated CRDA 60t, only differed in the powerplant choice as well as featuring Italian weaponry, while the rest remained virtually identical to the original.

The first of the CRDA 60t torpedo boats were completed by April of 1942, of which a total of 36 would be built. The CRDA 60t torpedo boats first saw action during WW2 in summer of the same year. One of the most notable successes of their early service career was the fatal injuring of the British light cruiser HMS Manchester, followed by sinking by British ships, caused by MS 16 and MS 22 in August of 1942, also marking the largest target to be destroyed by any motor torpedo boat during WWII.

Some vessels of the type also served with the Kriegsmarine, particularly those which were captured by the Germans following the signing of the armistice in September of  1943. Of the 36 CRDA 60t torpedo boats, 16 were lost in action during the war. Many surviving units continued serving with the Italian Navy postwar and well into the Cold War, thanks to modernization programs. A handful of the surviving units were also handed over to the French and Soviet Navies respectively under the armistice treaty conditions. The last of the highly modernized CRDA 60t torpedo boats was decommissioned as late as 1979, marking the end of a 37-year service career.