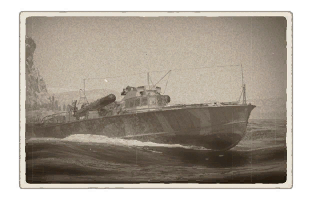 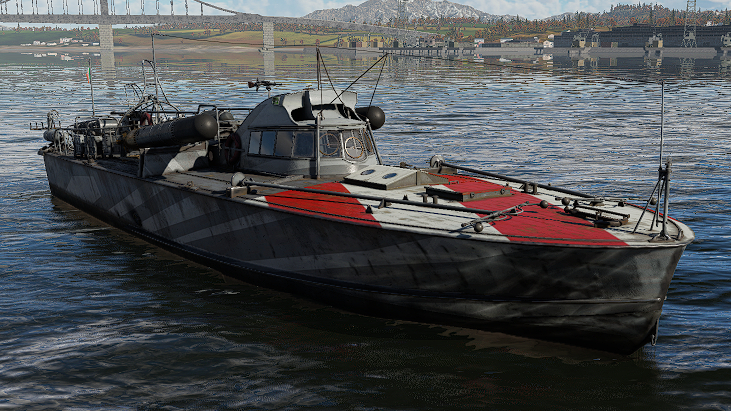 The Velocissimo Classe 500, MAS 569 is a premium rank I Italian motor torpedo boat with a battle rating of 1.0 (AB/RB/SB). It was introduced in Update "Starfighters".

The MAS 569 is made entirely from wood, the hull has about 40 mm of wood for the hull and 15 mm for the superstructure.

It can withstand blows up to 20 mm, beyond 20 mm it really starts to struggle in fact it will only take a few moments to sink. On the MAS there are 15 sailors, which may seem few, but compared to the 6 members of the G-5 and 7 of the LS, these 15 are enough and advanced.

The advantage of having a relatively small ship and many members is that it will not take long to repair and extinguish the ship.

Another thing to be careful about is if you hit a reef you will lose crew or in the worst scenario the entire ship.

The MAS 569 is propelled to a speed of 80 km/h thanks to 2 Isotta Fraschini engines outputting 500 horsepower. The peculiarity of the MAS is that its 2 engines are civilian engines, not special engines only for the armed forces, these engines are used by Regia Aeronautica too.

These two engines are also capable of going to -33 km/h.

The primary armament is composed of one 6.5 mm Breda Mod.30 and a 20 mm Breda 20/65, the 20 mm causes little damage and has a very low rate of fire but the 6.5 mm have a small calibre but have a high fire rate and can pack a quite a punch.

The MAS 569 is equipped with two types of additional armament. The first one is the W.200 torpedo, a torpedo that can navigate up to 81 km/h for 3 km, while losing 7 km/h but gaining 1,000 m of range with the torpedo mode modification. These two torpedoes are excellent for quick attacks on larger ships. With their good speed and 200 kg of explosive, it will be child's play to sink a ship.

The second additional armament of the MAS 569 is the depth charge B TG, 6 depth charges can be used in total and are positioned at the back of the ship. The B TGs with their 60 kg of explosive each are very effective to destroy ships that get a little too close, you can also flank the big ships and throw them at them.

The MAS 569 is a rather odd ship, the 20 mm cannon has a low rate of fire and small magazine, as well as being unable to fire directly forward, drastically limit its potential, but thanks to the 6.5 mm the MAS 569 gets a big advantage which is its rate of fire which can cause serious damage to enemy ships. The best choice when using the cannon and machine gun is not to sail forwards, but to stay to the side. This allows you to use the entire operational area of the weapons.

The best way is to stay behind cover and only move backwards when engaging and then return to cover. One-on-one combat against almost any other reserve boat will not work in your favour, so the element of surprise is very important. 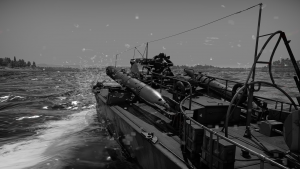 During the evening of 14 February 1943, while returning from a mission, it sighted a Soviet submarine surfacing about 10 miles to the east.

Between March and April 1943, together with the MAS of the IVa Flottiglia, it took part in numerous battles with Soviet patrol boats and gunboats and some demonstrative actions along the enemy coast. 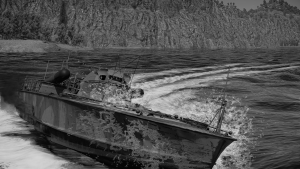 Then ceded on 28 August 1943 to the Romanian Navy, and was scuttled at Costanza or somewhere in the Black Sea in August 1944.

The MAS 569 is part of the final series of the MAS type "500" PT boats. It was part of the Italian Black Sea flotilla and participated in the August 1942 attack on Soviet cruiser Molotov.