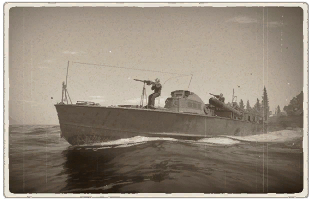 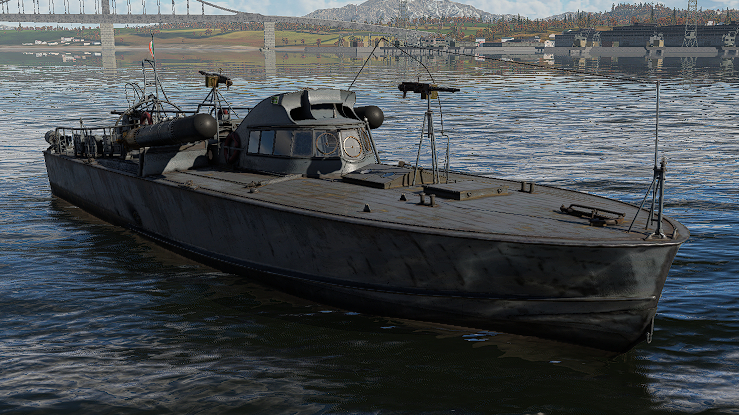 The Velocissimo Classe 500, MAS 561 is a rank I Italian motor torpedo boat with a battle rating of 1.0 (AB/RB/SB). It was introduced in Update "Raining Fire".

This ship has the entire hull made of wood, more precisely 40 mm of wood for the hull and 15 mm for the superstructure. Against all expectations, this wood is much more effective than one might think, in fact as a reserve boat the MAS 561 is one of the most resistant to damage. It can withstand rounds up to 20 mm, although after 20 mm it will only take a few moments to sink. There are 15 sailors, which may seem few but are enough compared to the 6 members of the G-5 and 7 of the LS 3. The advantage of having a relatively small ship and many members is that it will not take long to repair and extinguish fires on the ship.

The MAS 561 is propelled to a speed of 80 km/h thanks to 2 engines of 500 horsepower. The peculiarity of the MAS is that its 2 engines are civilian engines, not special engines for the armed forces. These two engines are also capable of going to -33 km/h.

The primary armament is composed of two 12.7 mm and a 20 mm, thanks to its 2 x 12.7 mm machine guns MAS 561 can cause serious damage in a short time to enemy ships, while the 20 mm causes little damage and has a very low rate of fire.

The MAS 561 is equipped with two types of additional armament. The first one is the W.200 torpedo, a torpedo that can navigate up to 81 km/h for 3 km. With the torpedo mode modification, the torpedo will lose 7 km/h but in compensation it gains 1,000 m of range. These torpedoes are excellent for quick attacks on larger ships. With their good speed and 200 kg of explosive, it will be child's play to sink a ship.

The second additional armament of the MAS 561 is the B TG depth charge, two of these charges can be equipped and being positioned in the back of the ship will be easier to use. The B TGs with their 60 kg of explosive each are very effective to destroy ships that get a little too close, you can also flank the big ships and throw them at them.

To engage other small ships, it is better to maximize your firepower shooting from the side so you can use the machine guns and the 20 mm cannon at the same time.

To engage strafing aircraft, move in the same direction as the aircraft, lock the target, go to the gun sight view and lead your fire to the engine of the plane or cockpit if its a twin-engine plane. Once you destroyed it, or if you are not able to hit it, change direction with a sharp turn to avoid their return fire, as the plane is usually not as manoeuvrable as the boat.

To engage larger ships, you should use islands as cover to hide from their fire. It is useful to think a route to your target or destination (capture point, ambush position, etc) right from the start having all the present cover of the map and allies into account. To attack, you must get as close as possible to the target without getting destroyed. To do this, you must make sure the large ship is engaged in a firefight with another ship. Hold your fire to remain undetected and sneak to your target at high speed. Once you are close enough to launch a torpedo, launch them and get back behind cover as fast as possible using a smoke screen or terrain to conceal your escape.

The MAS 561 is a rather odd ship, despite being the reserve ship equipped with the largest calibre armament, its rate of fire and small magazine, as well as its inability to fire directly forward, drastically limit its potential. However, it can still be a significant threat to other ships. The best strategy when using the cannon is not to sail forward, but to turn your back on the enemy. This way you can use the full operational area of the weapon while exposing little of the hull, which increases the ship's survivability by a few crucial seconds. The best way is to stay behind cover and only move backwards when engaging and then return to cover. One-on-one combat against almost any other reserve will not work in your favour, so the element of surprise is very important.

After the armistice announced by Pietro Badoglio, 8 September 1943, the various military forces of the Kingdom of Italy were divided, and in 23 September 1943, Mussolini succeeded in founding the RSI (Italian Social Republic) and founded a new military corps to counter the Allies who continued to advance into Italy. In particular, the MNR (National Republican Navy), the fascist navy of the RSI, put into service former ships of the Regia Marina, one of which was the MAS 561. It was scheduled to be transferred to the Adriatic Sea, but was not carried out.

Later it was put into service, but before service in the MNR it was modified with the addition of two 12.7 mm Breda-SAFAT.

Later the MAS 561 was renamed SA 16 for German purposes.