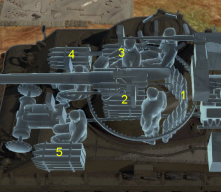 LVT(A)(4)(ZiS-2): don't assume that you are indestructible in a downtier. If you see the giant boat-like chassis of a LVT but with a long cannon on top, be very careful. This LVT is able to penetrate your armor easily within 400m, or if you are not angling the hull. To block its incoming shells, either angle your hull, be at a hull-down position or be >500m away from it. While its shells can tear through your armor with ease, you can also effortlessly destroy it with your HEAT by causing a hull break. While you reload, don't forget to wiggle around in a patternless way to mess up its aim -- its gun traverse rather slowly, making it quite hard to keep up with moving targets.