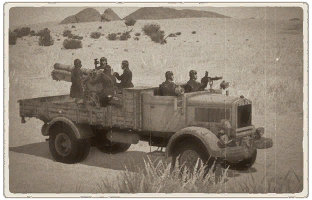 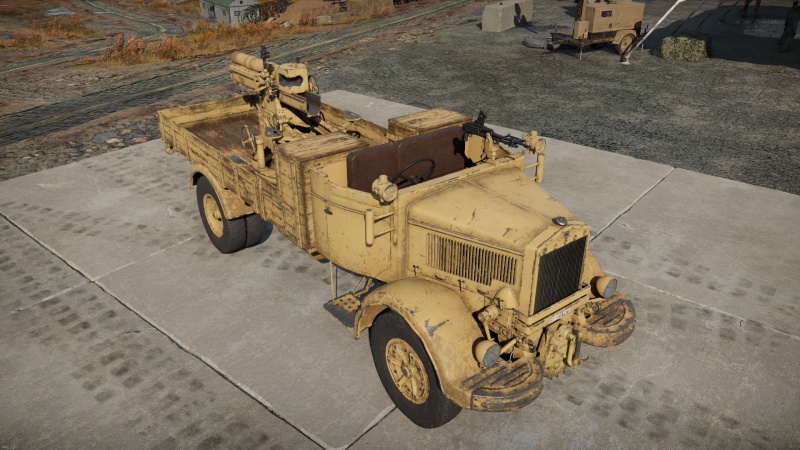 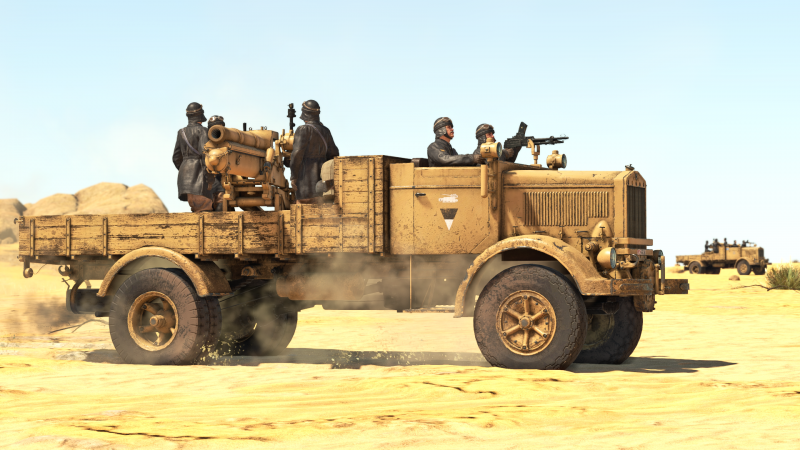 This truck has basically no armour, this is its greatest weak point. The crew can be knocked out even by rifle-calibre machine guns because it is exposed. The truck is quite big so it's an easy target to planes too.

The truck itself is quite light and its mobility allows it to reach good spots in battle. The turning circle of the truck is big so it's not easy and fast to turn around in confined spaces.

The 100 mm Cannone da 100/17 Mod.1914 has a long reload time. It has decent penetration for its BR but it's not that impressive either. The gun traverse is slow. The gun has no depression at front of the truck because of the cabin. Post-penetration damage is good. It usually knocks out opponents with a single shot, but not always.

There is an 8 mm Breda Mod. 38 machine gun on the front of the vehicle. Since it can give away your position, it is best to use it as a last resort weapon. Otherwise, you can use it against low-flying aircraft.

The best way to play the Lancia 3Ro (100/17) is to use it as a flanker and suprise attack vehicle. Due to the vehicle being wheeled, it is able to reach spots at the start of the match that many vehicles on the enemy team will not expect you from. You need to have good situational awareness and also great map knowledge to fully take advantage of its wheeled nature. Finding a powerful spot to wait out enemies can prove to be quite effective in the hands of an experienced player. Unlocking the modules for this vehicle might be hard for less-experienced players due to the vehicles poor survivability capabilities. The Lancia 3Ro is an overall very weakly protected tank destroyer so its best if you try to keep your distance from enemy vehicles. Any machine gun fire, artillery, or even attacks from the air will render the Lancia 3Ro out of combat. Its also good to note that the main armament of the vehicle does not have any depression when facing directly the front so you are for the most part, presenting your vehicle with either the side or back to the enemy. This is why as previously mentioned, its best to find a good spot early in the match where you can take advantage of the good qualities of your vehicle. When it comes to other armament you have access to an 8 mm Breda Mod. 38 machine gun on the front of the vehicle. Instead of using this offensively, use it more as a way to line up your shots accurately for your main gun. You could also use the machine gun to spot enemy players and mark them on the map for you team to take out. It is your only line of defence when your main armament is loading so keep that in mind when playing the Lancia 3Ro. If you are spotted, make sure you keep in mind that the vehicle has a poor turning circle, so when you are in your position make sure you keep in mind exit points in case you are spotted and have to retreat or move to another position. Overall, the Lancia 3Ro can be quite deadly and dangerous to the enemy team if used right, don't rely on your armour and players should be fine with it.

The story of the Lancia 3Ro began during the mid-1930s, when Vincenzo Lancia started producing Ro trucks using Junkers diesel 2-cylinder 3.2L engines. In October 1937, the new 3Ro was introduced with a civilian variant (Serie 464) and a military variant (Serie 564). Deliveries began in 1938. It was very reliable and due to its performance on sandy terrain, it was given the nickname "Re del Deserto" (King of the Desert). The 3Ro was so robust and powerful that even the British started using them in North Africa when they had the rare chance of capturing them. The Soviets also allegedly captured some for their own use. It would also primarily been chosen because it was easy to maintain and also had great off road mobility for a vehicle of its class.

The Raggruppamento Esplorante Corpo d'Armata di Manovra (in English: Mobile Army Corps Reconnaissance Battlegroup) or RECAM for short, began to plan out an easy and cheap method to give their side a stronger fighting chance by upgunning several Lancia 3Ro trucks with the Skoda 100/17 howitzer. The cannon originated from the First World War and was captured or given to Italy via reparations by Austria-Hungary. In Italian service it would go under the name of Obice da 100/17 modello 16. Although the gun was old, it still proved its worth and became an extremely potent vehicle. The cannon it used was able to fire a multitude of munitions, including Granata da 100 Mod.32, Granata da 100 Mod.914, Effetto Pronto da 100, and Effetto Pronto mod.43. Interestingly enough, the Effetto Pronto da 100 was one of the first ever HESH-type munitions to ever be made and used in combat. After the First World War, they'd be officially standardised and would be used extensively around multiple Italian theatres. The first units would be made in 1940, and first saw combat a year later in 1941. The Lancia 3Ro proved to be a steady platform and quickly became one of the strongest support vehicles inside the Italian army's arsenal. In terms of mobility, the vehicle used the Lancia Tipo 102 water-cooled engine, which allowed the vehicle to reach speeds of up to 45 km/h. The vehicle was not armoured, the crew was exposed which meant that as soon as an enemy had the vehicle in its sights, chances are that the Lancia 3Ro would not have lasted much longer. During the North African campaign, the vehicle saw usage in many different battles such as the Battle of Marmatica. Sadly however, the Autocannone da 100/17 su Lancia 3Ro was produced in small numbers by the Regio Esercito, by 1943 most units if not all would be wiped out. Some Lancia 3Ro's exist today, but in the civilian variant, displayed in museums or owned by private citizens.