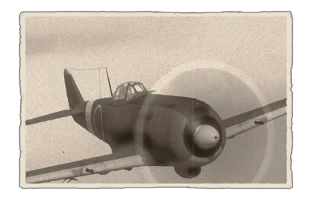 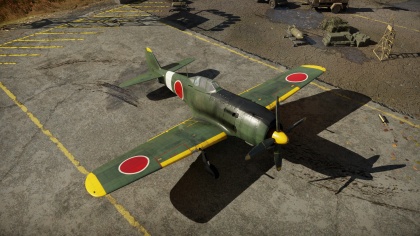 The Hei Hayate is the exact same plane as the Ko and otsu - same good turn rate, climb rate, and compression. Having flown those two, the Hei Hayate is quite literally the exact same. As with the other two, use your excellent vertical energy retention and good maneuverability to your advantage. You can outturn all allies except the Merlin Spitfires and the P-59 using combat flaps. You still retain the OK roll rate and abysmal rudder of the other Hayates.

The Ki-84 hei Hayateis armed with:

The Ki-84 hei Hayatecan be outfitted with the following ordnance:

The Hei Hayate is the same great Hayate but with 2x 30 mm cannon instead of 2x20 mms. Although this might not seem too important, one hit from a HE 30mm shell will easily send your enemies to their doom. This solves the problem of the lacklustre 20 mms. When up-tiered to jets, focus on taking out propeller-powered aircraft. Climb high, and kill. Once all the props are down, look for furballs and/or ground-pounding jets. Swoop down on these people and destroy them. When jumped by a jet, there are a few things you can do such as pulling evasive manoeuvres and wearing the enemy's energy down. Call out for your jet teammates to help you out. When there is one more person running away, unless they are a bomber (which are typically easy to catch) or a prop fighter, will not be much for you to do. Just go to the airfield, repair, and "J"-out. Equip ground target rounds and bombs and try to wear down the tickets. Remember not to die. Survival is more important than ever in the Hei Hayate - your astounding repair cost means that you need to take down at least three air targets before breaking even with this aircraft's repair cost!