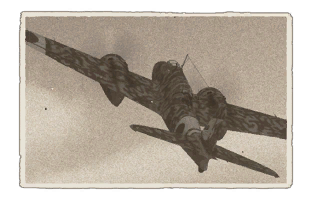 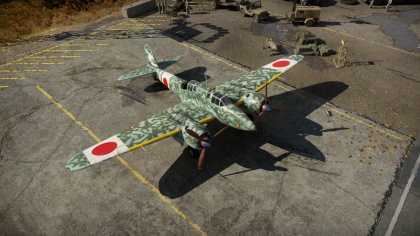 The Ki-45 tei can be outfitted with the following ordnance:

This variant of the Ki-45, the Ki-45 tei, features the first "schräge musik" armament of the series. Wielding one Ho-204 37 mm cannon and two Ho-5 20 mm cannons, the Ki-45 tei is the definition of a bomber hunter. It's 37 mm cannon allows the Toryu to take down bombers with ease, and its dual 20 mm cannons allow for even more flexibility in the bomber hunting department. Although deadly, the 37 mm cannon only holds 15 rounds, so shot placement is crucial. The round itself also travels fairly slowly in the air, making it hard to hit fast moving enemy fighters. The 20 mm cannons are best used in a secondary weapon role, as they are fixed at an upward angle. To use these weapons, one must bind a key to them via the in-game controls menu (it is on the first page that comes up, basic). Unique to the tei model, this Ki-45's ground attack role is improved due to the ability to equip bombs.

The Ki-45 tei also retains its impressive turn rate from the Ki-45_otsu. Although the aircraft itself is large and presents an "easy target" in many players' minds, the Ki-45 is rather nimble. Use this to your advantage when engaging enemy aircraft. Unfortunately, the Ki-45 is a heavy fighter, meaning its turn time is still not on par with other aircraft such as the F2A-3. In certain cases, the Ki-45 pilot may have to rely on his or her tail gunner to get the job done. The "tei" version of the Ki-45 features a 7.92 mm Type 98 machine gun with 1050 rounds. Although lacklustre, with shot placement it is possible to destroy enemies on the aircraft's tail. Aim for the pilot or the engine, as those are generally the weakest points on most aircraft. If the tailing enemy is a bi-plane, aim for the wings since they are very fragile.

The Toryu is also rather fragile for a heavy fighter. Although it does feature two engines, the Ki-45 does not have very much armor protection. Only the back of the pilot's seat and the nose has armor, leaving both the gunner and engines unprotected. This can prove costly in a fight. If one does find him or herself tailed, call upon teammates for assistance.

Initially designed to be a bomber escort, the Ki-45 was first deployed in what is now China and Vietnam. It was found to be easily outclassed by P-40s piloted by the Flying Tigers. As a result, the Ki-45's role was changed to anti-shipping and ground attack, where it performed satisfactorily. Nonetheless, the Ki-45's greatest strength proved to be its bomber intercepting capabilities. Heavily armed with 37mm cannon, the Toryu (Dragon Slayer) could destroy heavy bombers with ease. As the war progressed, the need for an interceptor to defend the Japanese mainland was ever present. Soon, the Ki-45 was deployed to counter B-29 Superfortress raids. Although its armament was clearly deadly enough, the Ki-45 suffered at high altitudes. Pilots soon resorted to ramming attacks against the Superfortresses. Special attack groups specifically designed for this purpose formed, but by late 1945 Imperial Japan's fate had been sealed. The Allies allocated the name "Nick" to the Ki-45.

It should be noted that using the 37 mm Но-203 cannon at night often temporarily blinded the pilot after firing.

Radar was to be mounted in the fighter's nose section. But engineering problems did not allow the full implementation of this plan; the radar was fitted in the nose section under the plastic fairing on only one prototype aircraft.

The pilot's station was protected with a 17 mm armored headrest and backrest. The magazine of the Ho-203 cannon was also covered with 13 mm armor sheets, on the front and back. The radio operator/gunner had no armor protection whatsoever.

After American B-29 Superfortress bombers began to raid Japan, the combat load drastically increased for the sentais armed with Ki-45 fighters, which could oppose the American bombers, at least to some extent. From June 1944 on, all units with Ki-45s were lumped into the Air Defence Force of Japan.

Despite their absence of airborne radars, Toryu pilots achieved quite significant results. In particular, pilots of the 4th Sentai chalked up over 150 shot-down American aircraft.

A number of Ki-45 KAI Hei (Tei) aircraft from among those captured within the territory of China were used by the Chinese armed forces, including the People's Liberation Army during the Civil War in 1946-49."