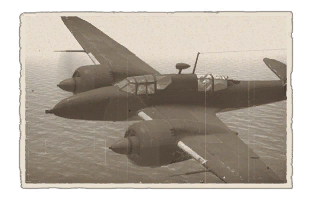 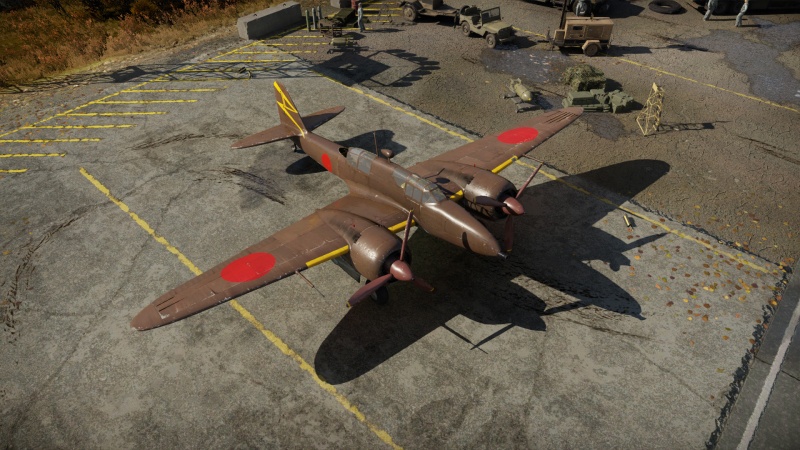 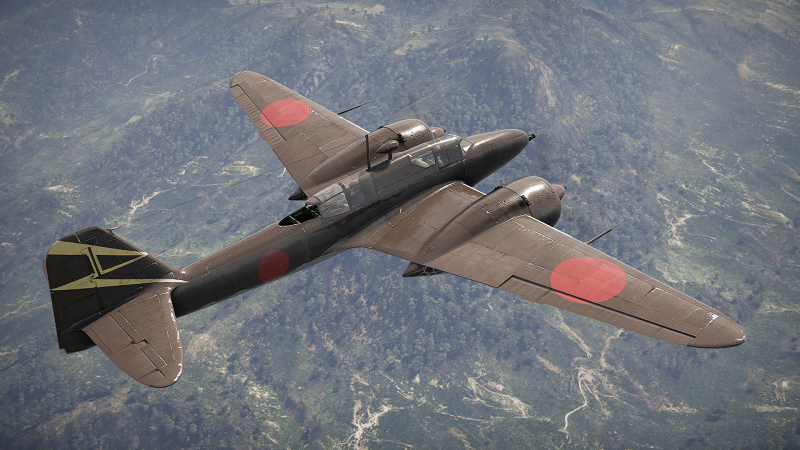 The Ki-102 otsu (Designated: Type 4 Assault Aircraft) is a rank III Japanese twin-engine fighter with a battle rating of 3.0 (AB) and 3.3 (RB/SB). It was introduced in Update 1.35. The Allied reporting name for this aircraft was "Randy".

The Ki-102 otsu has a decent speed advantage over most enemy planes in a straight line or dive and very good climb rate. The climb rate is typically better than almost every aircraft it will come up against. As with most Japanese heavy fighters, it is a very fast aircraft. The aircraft is as manoeuvrable as you would expect from a heavy fighter, though quite sluggish in a turn compared to a single engine aircraft. The Ki-102 otsu has good acceleration in a dive due to its two powerful engines and increased weight and decent acceleration when travelling in a straight line.

The Ki-102b is decently survivable as a twin-engine heavy fighter, but still isn't protected from too much sustained fire; manoeuvre the plane out of gun-fire and get the enemy off your tail using the 12.7 mm in the back which, when loaded with HE, can make short work of your chaser.

The Ki-102 also comes with self-sealing fuel tanks providing additional survivability if the fuel tanks were to get hit, by extinguishing fires and preventing them from running empty, allowing you to make it safely back to the airfield.

As a ground attacker, the Ki-102 otsu comes equipped with a 57 mm drum-loaded cannon to engage ground targets with but lacks shell choice and comes only with HE. The gun itself was based on the Ho-203 (37 mm) but increased in size. It lacks velocity and requires the pilot to be rather close to the target to hit anything at all which will make this plane very vulnerable when an attack is initiated.

Along with the Ho-401, it also comes with 2 x 20 mm Ho-5s which provide some good firepower for aerial targets and lightly armoured vehicles at a range unlike the Ho-401.

It is greatly advised to fire the guns separated.

The Ki-102 otsu has a 12.7 mm Ho-104 in the back, which shouldn't be underestimated as it can leave the pursuer burning down to the ground, but the belts for it aren't very favourable as most of them are filled with AP. Universal offers the best single bullet but is only fired every 4 rounds and Default offers a better universality.

There's 2 gameplay loops that the Ki-102b can provide: either play it in its specific role as a ground attacker or use it as a heavy-duty bomber hunter that will make short work of large planes with few to only a single hit.

As the Ki-102b was specifically built for this role, in air battles it can be used to get rid of light and unarmoured targets, from light vehicles to artillery emplacements, usually only requiring a single 57 mm shell to destroy them. You should get as many ground targets in a single pass until the 57 mm is out of ammo and head back to base to re-arm, leaving the 20 mms either for emergency (dog)fighting, or, if the skies are clear enough, continue the ground pound. If the skies are contested and enemies are on your tail, you can make short work of them with the 12.7 mm mounted in the back, especially when loaded with HE ammunition paired with small evasive manoeuvres.

In ground battles, the Ki-102b doesn't provide amazing ground attack capability due to a lack of AP/HEAT for the 57 mm and no suspended armament such as bombs or rockets. It can however overpressure open-top vehicles when hitting crew compartments and make short work of anti-air trucks. If the 20 mms are loaded with AP, these can even be used to hit light-armoured vehicles but will be rather hard to pull off with the size and slow manoeuvrability of the Ki-102.

While the Ki-102b isn't exactly made for this role, it can decently pull it off with the deadly HE the 57 mm delivers and the damage output the 20mms offer against large and heavy bombers (which other Ki-102 variants would have been tasked with).

While the 57 mm has a rather decent fire-rate for a large calibre aerial cannon, it doesn't hold up in accuracy and it's ill-advised to fire more than 2-3 shells in succession. Attempt to single fire the cannon and snipe bigger planes out of the sky, if this fails or isn't opportune, close in on the target at a safe angle and once close enough pull the trigger to send a full burst with the hopes of landing at least a hit or two and pull out of its gunner fire.

By January 1944, Kawasaki finished the design of the Ki-102b, with the first plane being completed later in March. The Ki-102a started development just after the Ki-102b in January, with the Ko's design being finalized in April of that same year. The first 3 prototype planes were originally all supposed to be Otsu models, but to hasten the development of the Ko model, were reviewed as such.

The Ki-102b was approved for mass production, designated (by personnel) as the Type 4 assault aircraft and was equipped with a Ho-401 (57 mm) in the nose and 2 x Ho-5 (20 mm), on top of the possibility to carry up to 500 kg of bomb load. Reports from deployed planes to units pointed out how the plane would be unstable during take-off, which was temporarily dealt with by extending the tailwheel post, with further plans to extend the fuselage but never materialized until the end of the war.

At the request of high command, the deployed Ki-102s was only supposed to be used for the defense of the mainland in case of an Allied invasion. But very few would see service against bombing raids as additional firepower, others were painted jet-black and utilized as night fighters. By the end of the war, 215 Otsu-types had been produced, excluding prototypes and additional prototypes, including those modified into Ki-102a (Ko) and Ki-108.